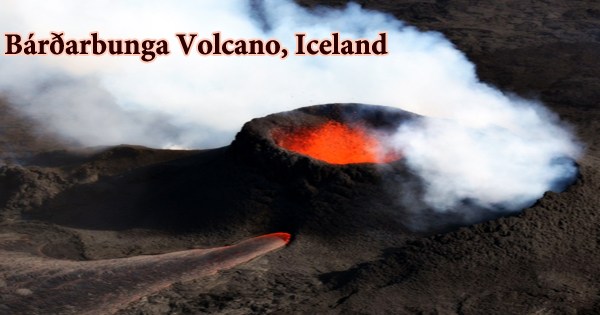 Bárðarbunga (Icelandic pronunciation: ˈpaurðarˌpuŋka) is a big central volcano in Iceland that lies beneath the 500-meter-thick Vatnajokull glacier. Bárðarbunga, Iceland’s second tallest peak at 2,009 meters (6,591 feet) above sea level, is part of a volcanic system that stretches over 200 kilometers (120 miles) and is 25 kilometers (16 miles) wide. The caldera of Bardarbunga is 70 km2 in size, 700 meters deep, and 10 kilometers broad. The base is approximately 1100 meters high, while the surrounding cliffs can reach up to 1850 meters. It is a stratovolcano lying beneath Vatnajökull, Iceland’s largest glacier, in Vatnajökull National Park.

In the area where the current-day center of the mantle hot spot under Iceland is assumed to be, Bardarbunga is positioned at the intersection of the eastern and northern volcanic rift zones. It has erupted 300-400 times in the last 10,000 years, with only 23 eruptions in historic periods (about the last 1000 years), implying that it erupts at a rate of roughly. Twice every century, the most recent being in 1910. The caldera is around 80 square kilometers in size, up to 10 kilometers broad, and 700 meters (2,300 feet) deep. The neighboring peaks reach 1,850 meters, while the base is usually around 1,100 meters.

The glacier-filled crater is hidden by the volcano, which is covered in ice to a depth of 850 meters. About 190 km long and 25 km wide, the related volcanic system and fissure swarm. Every 250-600 years, the volcano erupts. 8500 years ago, it was the site of the world’s greatest eruption. There have been multiple subglacial eruptions in recent years, the most recent of which occurred in 1864. There may be a link between the Grimsvotn volcano and the activity in Bardarbunga.

A significant ash and pumice fall-out deposit emerged from a massive explosive-effusive eruption (VEI 6) in 1477. On August 29, 2014, a fissure eruption from the Bardarbunga volcanic system began 45 kilometers northeast of the subglacial caldera at the Holuhraun vent. After generating a lava field over 85 km2 in size, lava emission stopped on February 28, 2015. Due to its remote position and rare eruptions (about every 50 years), Bárðarbunga was a little-known volcano in Iceland. However, new investigations have revealed that several tephra strata previously considered to originate from other volcanoes were erupted from Bárðarbunga.

Bardarbunga erupted approximately 8600 years ago, producing the world’s greatest known lava flow in the last 10,000 years (more than 21 cubic kilometers of volume). The Veidivötn fissure system released lava that traveled more than 100 kilometers to the south coast. When lava from Bardarbunga’s magma chamber erupted in 2014, it triggered the Holuhraun eruption. The last eruption occurred in 1910. Outside the glacier, there has been frequent volcanic activity in the highlands between Vatnajökull and Mýrdalsjökull to the southwest, as well as to the northeast toward Dyngjufjöll.

Due to the flow of ice into the caldera and snow buildup, the 65-m-deep hole in the glacier produced during the 2014-2015 activity was getting shallower, and the depression’s depth had fallen by 8 m since the previous year. Because “Bárðar” is the genitive case of “Bárður,” Bárðarbunga is named after an early Icelandic settler named Gnpa-Bárður. It literally translates as “Bárður’s bulge” or “Bárður’s bump.” The volcano is hidden beneath the Vatnajökull glacier’s northern section, and it features a 700-meter-deep caldera hidden behind ice with large side fissures, from which eruptions have occurred.

During a cargo flight from Luxembourg to Reykjavík on September 14, 1950, an Icelandic airline Loftleiir Douglas C-54 Skymaster performed an emergency landing on the Vatnajökull glacier at Bárðarbunga. There were no fatalities, but they were unable to notify their whereabouts due to destroyed radio equipment. The Veidivötn fissure stretches over 100 kilometers to the southwest, almost to Torfajökull volcano, while the Trollagigar fissure stretches 50 kilometers to the northeast, almost to Askja volcano. Jökulhlaups (glacier-outburst floods) are a severe threat from Bárdarbunga, and they can be dangerous for areas in all directions.