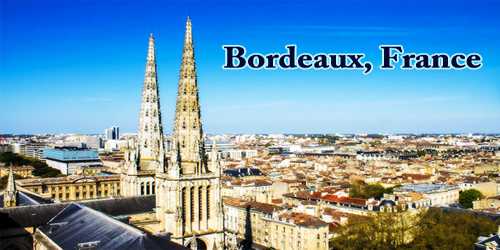 Bordeaux (French pronunciation: bɔʁdo; Gascon Occitan: Bordèu (buɾˈðɛw)) city and port, capital of Gironde département, Nouvelle-Aquitaine région, southwestern France. It lies along the Garonne River 15 miles (24 km) above its junction with the Dordogne and 60 miles (96 km) from its mouth, in a plain east of the wine-growing district of Médoc.

Bordeaux is very well known by wine lovers, being located in the center of one of the world’s most famous wine regions. As such, many things to see in Bordeaux are wine-related there are dozens of wine bars and places organizing wine tastings, wine tours, and even a full-on wine museum, the recently-opened Cite du Vin, shaped like a decanter and including wine-related interactive exhibits.

The municipality (commune) of Bordeaux proper has a population of 257,804 (2019). Bordeaux is the center of Bordeaux Métropole that has a population of 796,273 (2019), the 5th largest in France after Paris, Marseille, Lyon and Lille with its immediate suburbs and closest satellite towns. The larger metropolitan area has a population of 1,232,550 (2016). It is the capital of the Nouvelle-Aquitaine region, as well as the prefecture of the Gironde department. Its inhabitants are called “Bordelais” (for men) or “Bordelaises” (women). The term “Bordelais” may also refer to the city and its surrounding region.

The great port city a popular stopover for cruise liners can trace its origins as a capital city back almost 2000 years. In the year 70 AD, Bordeaux replaced Saintes as the capital of the Roman province of Gallia Aquitania. Apart from some periods of conflict following the breakup of Roman Gaul, Bordeaux has remained the biggest city, and for most of its history, a capital city. firstly it was the independent Duchy of Aquitaine, then for three centuries, Aquitaine was a possession of the Kings of England. Since the end of the Hundred Years’ War, it has been part of France. 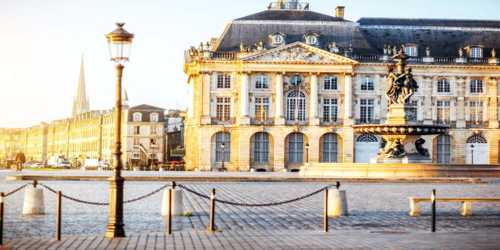 Being France’s most prominent wine region, with 3,37 Billion € turnovers it is both the center of a major wine-growing and wine-producing region hosting the world’s most renowned estates and a prominent powerhouse exercising significant influence on the world’s wine and spirits industry, although no wine production is conducted within the city limits. It is home to the world’s main wine fair, Vinexpo, and the wine economy in the metro area takes in 14.5 billion euros each year. Bordeaux wine has been produced in the region since the 8th century. The historic part of the city is on the UNESCO World Heritage List as “an outstanding urban and architectural ensemble” of the 18th century. After Paris, Bordeaux has the highest number of preserved historical buildings of any city in France.

The dry soil of Médoc attracted settlement as early as the Bronze Age; and, at least since Roman times, Bordeaux has been a flourishing town and port, with connections particularly with Spain and Britain. As Burdigala, it was the chief town of the Bituriges Vivisci, a Celtic people. Under the Romans, it was the capital of the province of Aquitania, which extended from the Pyrenees to the Loire. In the 4th century Burdigala, then the capital of Aquitania Secunda (one of the three parts into which the emperor Diocletian had divided Aquitania), was described by the writer Ausonius, a native of the city, as a square, walled town and one of the great educational centers of Gaul. During the decline of the Roman Empire, the region around Bordeaux entered a period of political instability from which it recovered only when the dukes of Aquitaine established themselves early in the 10th century.

As part of the inheritance of Eleanor of Aquitaine, Bordeaux, along with the rest of the duchy, became English in 1154 upon the accession of her husband to the English throne as Henry II. His 14th-century descendant Edward the Black Prince, who for 20 years held court at Bordeaux and whose son, Richard (later King Richard II), was born there, is still honored in the city. Under the English, Bordeaux was given unusual freedom: mayors were elected from 1235, and a thriving trade developed with England’s ports. Neighboring towns such as Saint-Émilion and Libourne joined a federation under the leadership of Bordeaux. After the French victory over the English at Castillon in 1453, the city was united with France; but the burghers of Bordeaux long resisted limitation of their municipal freedoms, and 120 of them were executed after a salt-tax rebellion in 1548.

In 1462, Bordeaux created a local parliament. However, it only has begun to regain its importance during the 17th century when it became a major trading center for sugar and slaves from the West Indies, along with its traditional wine exports. Bordeaux adhered to the Fronde, being effectively annexed to the Kingdom of France only in 1653 when the army of Louis XIV entered the city.

In the 18th century, Bordeaux again prospered from the “triangular” trade: slaves from Africa to the West Indies, sugar and coffee back to Bordeaux, then arms and wines back to Africa. The marquis de Tourny, intendant of Guyenne, made the city pleasing with squares and fine buildings. The Girondist Party of the French Revolution was formed in Bordeaux, which suffered severely during the Reign of Terror. After enduring the English blockade during the Napoleonic Wars, the city in 1814 declared for the Bourbons, prompting Louis XVIII to give his grandnephew the title of duke (duc) de Bordeaux.

In 1870, at the beginning of the Franco-Prussian war against Prussia, the French government temporarily relocated to Bordeaux from Paris. This recurred during World War I and again very briefly during World War II when it became clear that Paris would fall into German hands.

From 1941 to 1943, the Italian Royal Navy (Regia Marina Italiana) established BETASOM, a submarine base at Bordeaux. Italian submarines participated in the Battle of the Atlantic from this base, which was also a major base for German U-boats as headquarters of 12th U-boat Flotilla. The massive, reinforced concrete U-boat pens have proved impractical to demolish and are now partly used as a cultural center for exhibitions.

Since 1945 Bordeaux has continued to expand; new suburbs have been built, and many of the small towns, which formerly surrounded the city, have now been incorporated within it, forming a continuous built-up area. This expansion has been accompanied by a shift of both population and economic activity from the center toward the periphery of the city. Office-based activities (including government administrative services) and retailing, both concentrated in and around the Mériadeck commercial center, a major redevelopment of the 1970s, dominate in the city center; part of the historic center has been rehabilitated and is a conservation zone. Conversely, the periphery is dotted with a series of office, retail, and business parks, hypermarkets, and industrial zones. 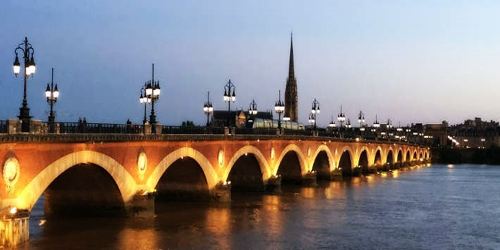 The modern city of Bordeaux is surrounded by a semicircle of boulevards, beyond which lie the suburbs of Le Bouscat, Caudéran, Mérignac, Talence, and Bègles. The Garonne River (1,650–2,250 feet (500–690 meters) wide), separating the city proper from the suburb of La Bastide, embraces a 5-mile (8-km) crescent of broad quays, behind which rise tall warehouses, factories, and mansions. Outside the great city, squares are characteristic low, white houses. La Bastide, on the right bank, is reached by a 19th-century bridge. Some gates of the old city wall remain, and there are ruins of a Roman amphitheater.

From the 1960s to 2016, Bordeaux was the capital of the region of Aquitaine. Since 2017 it has become the capital of a larger area of southwest France called New Aquitaine, or Nouvelle Aquitaine, that stretches from the Limoges area in the north, as far as the Spanish border in the south.

Winters are cool because of the prevalence of westerly winds from the Atlantic. Summers are warm and long due to the influence from the Bay of Biscay (surface temperature reaches 21 to 22 °C (70 to 72 °F)). The average seasonal winter temperature is 7.1 °C (44.8 °F), but recent winters have been warmer than this. Frosts in the winter occur several times during a winter, but snowfall is very rare, occurring only once every three years. The average summer seasonal temperature is 20.7 °C (69.3 °F). The summer of 2003 set a record with an average temperature of 23.3 °C (73.9 °F).

The center of Bordeaux has everything that one would expect of a vibrant modern city, shops, services, big stores, cinemas, and lots more, but it has them in the framework of an architectural ensemble of stone buildings most of which date back to well before the twentieth century. The only building features that break the city’s five-story skyline today are the towers of the cathedral, city gates, and other churches.

The great families of Bordeaux made their fortunes in shipping and trade, especially of the celebrated wines of Bordeaux. The prosperity of these wine-growing and wine-trading houses took a great leap at the time of the English domination. After a critical period during the 15th–17th century, prosperity returned in the 18th century and has continued ever since, despite problems of weather and grape parasites, the most critical of which was the phylloxera infestation of 1869. The modern extent of the vineyards is about half its former maximum area. The government of France and the local growers regard to control of the quality and quantity of these wines as essential to the preservation of a major export market. Bordeaux has never been a major center of industry in France; however, from the 1960s, industrial activities have expanded. In addition to the more traditional industries such as food processing, light engineering, and the manufacture of textiles, clothing, and chemicals, the production of aerospace equipment, car components, and electronics has also become important. However, employment in the city is dominated by the service sector, reflective of Bordeaux’s role as a commercial, business, and administrative center. The city also has a number of universities and graduate schools and is a regional center for culture and the arts. 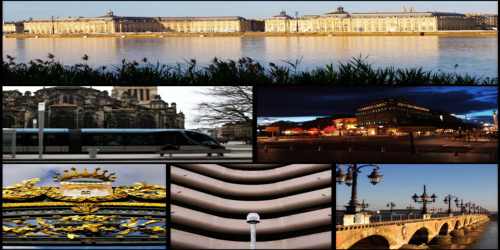 Bordeaux is a large city, but most of the principal attractions are located in, or close to, the old city area:

The city itself is a delight to tour around the historic center of Bordeaux is UNESCO-listed because of its wonderful 18th-century architecture, lending the city a real harmonious look, with its elegant sandstone buildings. The best view of the city can be had from the top of the Tour Pey-Berland, a Gothic tower located right next to the Cathedral, and one not-to-be-missed sight is Le Miroir d’Eau near Place de la Bourse, a row of mini-fountains turning the square into a giant water mirror.

The port area has been important since the 18th century, but commercial activity is now concentrated in five specialized out ports. With the closure of the oil refineries located along the Gironde, port traffic has declined, although refined petroleum products are still imported. Bordeaux is well integrated into the national motorway network, is linked to Paris by high-speed trains (TGV), and possesses a large regional airport.