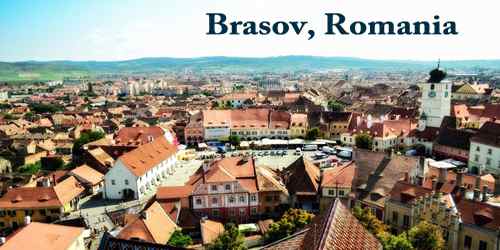 Brașov (UK: /bræˈʃɒv/, US: /brɑːˈʃɔːv, -ɔːf/, Romanian: braˈʃov; Latin: Corona; German: Kronstadt; Transylvanian Saxon: Kruhnen; Hungarian: Brassó), formerly (1950–60) Oraşul Stalin, is a city in Transylvania, Romania nestled right up against the mountains. It’s a big city with plenty of culture and action, there’s calm in nature just around the edges of the city and beyond. It is the 7th most populous city in Romania, with a population of 253,200. The metropolitan area houses a population of 382,896.

Founded by Teutonic Knights in 1211 and first mentioned in documents as Brașov in 1251, it became the center of a Saxon colony trading in cloth, weapons, metalwork, and wax throughout much of Walachia and Moldavia. the placement of the town at the intersection of trade routes linking the empire and western Europe, along with certain tax exemptions, allowed Saxon merchants to get considerable wealth and exert a powerful political influence within the region. 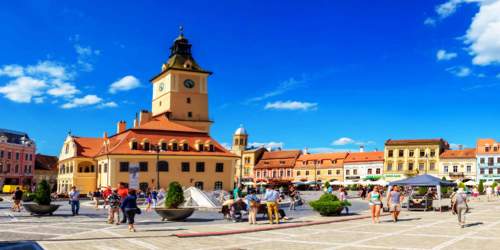 Brașov is located in the central part of the country, about 166 kilometers (103 miles) north of Bucharest and 380 kilometers (236 miles) from the Black Sea. It is surrounded by the Southern Carpathians and is a component of the historical region of Transylvania. The old (inner) town, heavily fortified within the 15th century against the Turks, survived with little damage and contains many historic buildings, including the government building (1420, restored 1777); the 190-foot (58-meter) watchtower, also called Trumpeter’s Tower (1528, restored 1910); the Orthodox St. Nicholas’ Church (1495?, restored 1751); and St. Bartholomew’s Church (13th century, the oldest building in Brașov). The Gothic church (1385–1477, restored 1711–15), is termed the Black Church due to its smoke-blackened walls resulting from a 1689 fire.

The city (Brasov) is placed in the inner Carpathian curve, at the foot of Tampa Mountain. Established in the 13th century, the Old Town Hall served as a meeting place for councilors of the town, known as centurions. The Trumpeter’s Tower, used during the Middle Ages as a watchtower, sits on top of the building to warn the inhabitants of the citadel of danger approaching. Today, the old city hall houses the Brasov History Museum.

Brasov is home to at least one of the narrowest streets in Europe. From 1950 to 1960, during a part of the Communist period in Romania, the town was called Orașul Stalin (Stalin City), lit. “Stalin City”, after the Soviet leader communist. Toward the top of the 19th century, the long tradition of merchants and craftsmen provided the muse for industrial growth. Additionally to factories manufacturing tractors, trucks, helicopters, and bearings, there are textile and chemical plants. Brașov is additionally a vital road and rail junction. Brașov remains a site for manufacturing hydraulic transmissions, auto parts, ball-bearings, construction materials, hand tools, furniture, textiles, and shoe-wear. There’s also an oversized brewery.

The Brasov Ethnographic Museum boasts collections including ceramics, glass objects from the 18th and 19th centuries, a very rich collection of costumes and textiles, painted eggs and icons painted on glass, metal, leather, and even on a bone. The heritage that’s preserved during this museum includes over 13,600 objects, dating from the 17th to the 20th century. The town also has several restaurants that serve local moreover as international cuisine (e.g. Hungarian and Chinese). A number of these are situated within the city center.