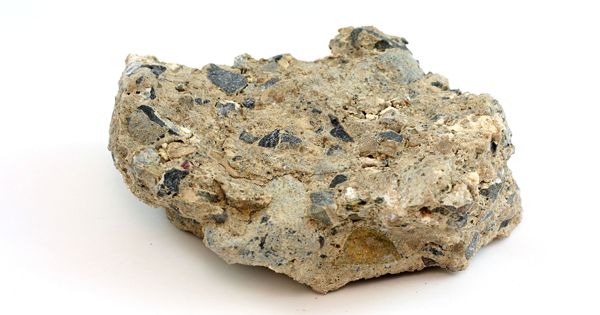 Breccia – a rock composed of broken fragments of minerals

Breccia is a term most often used for clastic sedimentary rocks that are composed of large angular fragments. It is a rock composed of broken fragments of minerals or rock cemented together by a fine-grained matrix that can be similar to or different from the composition of the fragments. The spaces between the large angular fragments are filled with a matrix of smaller particles and mineral cement that binds the rock together. It is a clastic sedimentary rock shaped from angular and boulder size clasts cemented or in a matrix. The word “breccia” has an Italian origin and means “stone made of cemented gravel.”

Breccia is a sedimentary rock made up of angular particles over two millimeters in diameter (clasts) with the spaces between the particles filled with smaller particles and mineral cement (matrix).

Breccia is a general term for more or less tightly bound clastic rocks composed of angular to semirounded rock debris and cement or matrix. The word has its origins in the Italian language, in which it means “rubble”. One of the most common locations for breccia formation is at the base of an outcrop where mechanical weathering debris accumulates. Another is in stream deposits a short distance from the outcrop or on an alluvial fan. It can be any color. The color of the matrix or cement along with the color of the angular rock fragments determines its color. The rock may be rough to the touch because of the angular clasts. Whether it polishes to a smooth surface depends on the similarity of clast and matrix composition. The rock occurs worldwide and has also been found on the moon and Mars.

Breccia has many compositions. Its composition is mainly determined by the rock and mineral material that the angular fragments were produced from. A breccia may have a variety of different origins, as indicated by the named types including sedimentary breccia, tectonic breccia, igneous breccia, impact breccia, and hydrothermal breccia. In arid and semiarid areas, the precipitation of mineral cement in shallow sediments or soils can result in the formation of extensive rock units known as “caliche.”

Breccia usually refers to rock of sedimentary origin, although it may also form from igneous or metamorphic rocks. A megabreccia is a breccia composed of very large rock fragments, sometimes kilometers across, which can be formed by landslides, impact events, or caldera collapse. The climate of the source area can also influence composition. Most breccias are a mix of rock fragments and mineral grains. The rock is mainly used to make sculptures, gems, and architectural elements.