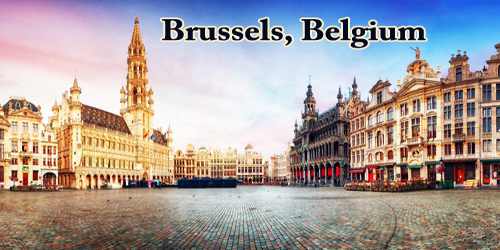 Brussels (French: Bruxelles (bʁysɛl) or (bʁyksɛl); Dutch: Brussel (ˈbrʏsəl)) city, capital of Belgium, and it is located in the valley of the Senne (Flemish: Zenne) River, a small tributary of the Schelde (French: Escaut). It is officially known as the Brussels-Capital Region (French: Région de Bruxelles-Capitale; Dutch: Brussels Hoofdstedelijk Gewest).

With its rich history, lush landscape, Epicurean enchantments, and bountiful collection of beers, Brussels is a traveler’s dream. Its closest capital cities, Amsterdam and Paris, are both under two hours away, while Brussels is under 90 minutes away from the nearby Belgian towns of Bruges, Liege, and Namur. Brussels is a rather small town compared to its sister cities; therefore walking and cycling are terrific options for transportation.

The Brussels-Capital Region is located in the central portion of the country and is a part of both the French Community of Belgium and the Flemish Community, but is separate from the Flemish Region (within which it forms an enclave) and the Walloon Region. Brussels is the most densely populated and the richest region in Belgium in terms of GDP per capita. It covers 162 km2 (63 sq mi), a relatively small area compared to the two other regions, and has a population of over 1.2 million. The five times the larger metropolitan area of Brussels comprises over 2.5 million people, which makes it the largest in Belgium. It is also part of a large conurbation extending towards Ghent, Antwerp, Leuven, and Walloon Brabant, home to over 5 million people. 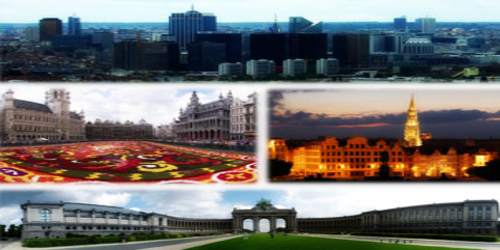 Greater Brussels is the country’s largest urban agglomeration. It consists of 19 communes, or municipalities, each with a large measure of administrative autonomy. The largest commune which, like the greater metropolitan area, is named Brussels contains the historic core of the city and the so-called “European Quarter,” where the institutions of the European Union (EU) are located. Greater Brussels officially became the Brussels-Capital Region in 1989, during the federalization of Belgium. Along with the much larger regions of Flanders and Wallonia, the Brussels-Capital Region constitutes one of the country’s three main political divisions. As the seat of the EU, Brussels is known as the “capital of Europe,” and its significance as a center of international governance and business makes Brussels a truly global city a status shared with such metropolises as New York, London, Paris, and Tokyo. Area Brussels-Capital Region, 62 square miles (161 square km).

Historically Dutch-speaking, Brussels saw a language shift to French from the late 19th century. The Brussels-Capital Region is officially bilingual in French and Dutch, even though French is now the de facto main language with over 90% of the population speaking it. Brussels is also increasingly becoming multilingual. English is spoken as a second language by nearly a third of the population and many migrants and expatriates speak other languages as well.

Brussels is known for its cuisine and gastronomy, as well as its historical and architectural landmarks; some of them are registered as UNESCO World Heritage sites. Main attractions include its historic Grand Place, Manneken Pis, Atomium, and cultural institutions such as La Monnaie/De Munt and the Museums of Art and History. Due to its long tradition of Belgian comics, Brussels is also hailed as a capital of the comic strip.

Brussels’ climate is temperate. Winters are mild and summers are often rainy. On average (based on measurements over the last 100 years), there are approximately 200 days of rain per year in the Brussels-Capital Region, one of the highest totals for any European capital. Snowfall is infrequent, averaging 24 days per year. The city also often experiences violent thunderstorms in the summer months.

Brussels lies in the north-central part of Belgium, about 110 kilometers (68 miles) from the Belgian coast and about 180 km (110 mi) from Belgium’s southern tip. It is located in the heartland of the Brabantian Plateau, about 45 km (28 mi) south of Antwerp (Flanders), and 50 km (31 mi) north of Charleroi (Wallonia). Its average elevation is 57 meters (187 feet) above sea level, varying from a low point in the valley of the almost completely covered Senne, which cuts the region from east to west, up to high points in the Sonian Forest, on its southeastern side.

Brussels lies in the Central Plateaus of Belgium. Located between the Atlantic oceanfront of sandy lowlands and polders to the north and the rugged Ardennes highlands to the south, Brussels has long played the role of economic and transportation nexus for the broader region that spans the valleys of the Schelde, Sambre, and Meuse rivers. During the medieval period, Brussels was enclosed by two successive circuits of fortification walls, constructed in the 11th and 14th centuries. The latter circuit, which encompassed the commercially important Senne and a significant escarpment to the east, was roughly in the shape of a pentagon, the trace of which is still visible from the air.

Over time, villages surrounding the pentagon were aggregated, and, together with historic central Brussels, they ultimately constituted Greater Brussels. Today, the metropolitan area of Brussels, girded by a beltway (the so-called grande ceinture), extends beyond the footprint of the 19 communes to encompass a fringe of the province of Flemish Brabant. 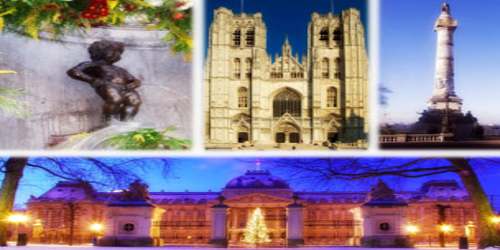 The City of Brussels is the location of many national institutions. The Royal Palace, where the King of the Belgians exercises his prerogatives as head of state, is situated alongside Brussels’ Park (not to be confused with the Royal Castle of Laeken, the official home of the Belgian Royal Family). The Palace of the Nation is located on the opposite side of this park and is the seat of the Belgian Federal Parliament. The office of the Prime Minister of Belgium, colloquially called Law Street 16 (French: 16, rue de la Loi, Dutch: Wetstraat 16), is located adjacent to this building. It is also where the Council of Ministers holds its meetings. The Court of Cassation, Belgium’s main court, has its seat in the Palace of Justice. Other important institutions in the City of Brussels are the Constitutional Court, the Council of State, the Court of Audit, the Royal Belgian Mint, and the National Bank of Belgium.

It is an interesting fact that Belgians do not share one common language. There are three official languages in Belgium and an official language border has been established between the regions. In Brussels, people mostly speak French but all public signs and documents are in two languages. Every visitor to Brussels should know some useful tips on local customs and facts. There are a few interesting things that have originated in Brussels that have inspired food, photographers, vegetables, and animal lovers around the world.

Brussels is the focal point of the Belgian railway system, one of the densest in the world. In 1911 the city began building a series of railway tunnels and viaducts connecting the North (1841) and South (1869) railway stations by way of the underground Central Station (1952). This so-called North-South link was completed in 1956. To alleviate worsening traffic problems caused by the city’s large number of commuters, in 1965 the city began developing a comprehensive subway and regional railway network that now extends to all parts of the Brussels-Capital Region. In the early 21st century an expanded regional network, linking the city with Flemish and Walloon communities on its periphery, was constructed. At the same time, the national railway company added high-speed rail links between Brussels and other major European cities such as London, Paris, Amsterdam, and Cologne.

The Brussels national airport is at Zaventem, to the east. A beltway (the grande ceinture) surrounds Greater Brussels, forming a hub of radiating highways that connect the major cities of Belgium. Vital canals also link the capital to Charleroi, to the south, and Antwerp, to the north.

Brussels waffles, known to Americans as the “Belgian waffle,” are best ingested at Maison Dandoy. This restaurant, dedicated solely to waffles, creates a wide variety of sugary selections including chocolate waffles, strawberry waffles, and waffles with whipped cream. The city of Brussels has evolved several times but to this day visitors can still see the original city walls. Throughout the ages, Brussels has been the home of kings, a trade hub, and an epicenter of many crafts.