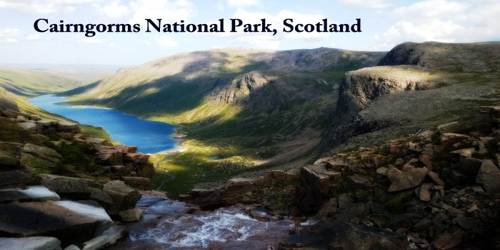 Cairngorms National Park (Scottish Gaelic: Pàirc Nàiseanta a’ Mhonaidh Ruaidh) is the largest national park in the UK (northeast Scotland) and is one of the country’s most special and cared for landscapes with a wide variety of traditional and unique villages and communities. The park was established in 2003. It was the second of two national parks established by the Scottish Parliament, after Loch Lomond and The Trossachs National Park, set up in 2002. The park covers the Cairngorms range of mountains and surrounding hills. Already the largest national park in the British Isles, in 2010 it was expanded into Perth and Kinross.

Founded around the Cairngorms Mountains, the park has an enticing mix of mountains, forests, lochs, and villages with a passion for whiskey. Finding walking trails and rock climbing routes won’t be hard here; it has five of the six highest mountains in the UK and over fifty munros, a Scottish term for mountains over 3,000 ft. But let’s not forget that this is also a premier skiing destination in Scotland, and home to the Malt Whisky Trail which features several distilleries.

Roughly 18,000 people reside within the 4,528 square kilometres National park. The largest communities are Aviemore, Ballater, Braemar, Grantown-on-Spey, Kingussie, Newtonmore, and Tomintoul. Tourism makes up about 80% of the economy. In 2018, 1.9 million tourism visits were recorded. The majority of visitors are domestic, with 25 percent coming from elsewhere in the UK, and 21 percent being from other countries.

Actually, The Cairngorms National Park is home to the spectacular Cairngorm mountain range, where five of the highest mountains in the UK are found. Dominated by largely natural vegetation, this vast expanse of wilderness is a haven for wildlife and outdoor lovers alike.

The Park covers an area of 4,528 km2 (1,748 sq mi) in the council areas of Aberdeenshire, Moray, Highland, Angus and Perth, and Kinross. The mountain range of the Cairngorms lies at the heart of the national park, but forms only one part of it, alongside other hill ranges such as the Angus Glens and the Monadhliath, and lower areas like Strathspey and upper Deeside. Three major rivers rise in the park: the Spey, the Dee, and the Don. The Spey, which is the second-longest river in Scotland, rises in the Monadhliath, whilst the Dee and the Don both rise in the Cairngorms themselves.

Where there are mountains there is usually water, and visitors will find plenty of crashing waterfalls, rolling streams and hidden lochs to explore. Loch an Eilein is a jewel of a loch with a 13th-century island castle. It has been voted Britain’s Best Picnic Spot in a nationwide competition by Warburtons and the woodland path around its shores is suitable for motorized wheelchairs and off-road buggies. 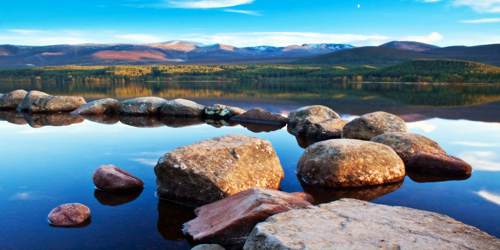 The majority of the rocks within the Cairngorms National Park belong to the Dalradian Supergroup, a thick sequence of sands, muds, and limestones that were deposited between about 800 and 600 million years ago on the margins of the former continent of Laurentia.

Along with crystal clear rivers and dark dense woodland, the glens and high mountain passes of the Park are also home to a host of fascinating museums on the history and lives of the people of the Highlands. And the castles, battlefields, and barracks tell the darker story of the region’s past.

Each of the four itineraries in this leaflet has something different to offer, from exploring the area’s royal connections to rambling alongside the fast-flowing River Spey.

The Cairngorm Mountains provide a unique alpine semi-tundra moorland habitat, home to many rare plants, birds, and animals. Specialty bird species on the plateaux include breeding ptarmigan, dotterel, snow bunting, golden eagle, ring ouzel, and red grouse. Mammal species include red deer and mountain hare, as well as the only herd of reindeer in the British Isles. They now roam the high Cairngorms, after being re-introduced in 1952 by a Swedish herdsman. The herd is now stable at around 150 individuals, some born in Scotland and some introduced from Sweden.

Significant settlements within the National Park area include Newtonmore, Kingussie, Carrbridge, Aviemore, Grantown-on-Spey, Tomintoul, Ballater Braemar, and Blair Atholl. 80% of the local economy depends on tourism, including winter sports, walking, climbing, fishing, and stalking. It was estimated that over 1.4 million people visited the Park in 2007.

Scotland’s National Parks were established by the Scottish Parliament under the terms of the National Parks (Scotland) Act 2000. In many eyes, this put right the fact that although National Parks were being designated in England and Wales from 1949, none existed in Scotland. This seemed a remarkable lapse given that it was a Scot, John Muir, who first came up with the idea of National Parks after emigrating to the USA in 1849.

Before the national park was established in 2003, Scottish Natural Heritage conducted a consultation exercise, considering the boundary and the powers and structure of the new park authority.

Following the establishment of the park many groups and local communities felt that a large area of highland Perth and Kinross should form part of the park and carried out a sustained campaign. On 13th March 2008, Michael Russell announced that the national park would be extended to take in Blair Atholl and Spittal of Glenshee, and the park was duly extended on 4 October 2010.

Virtually the entire landscape of Scotland has been influenced or managed by humans over a period of thousands of years. Deforestation, farming, cattle, sheep, deer, sporting estates, power generation and transmission, afforestation, leisure pursuits, and the needs of residents to live and work in the areas have all left their mark on the National Parks. The park is popular for activities such as walking, cycling, mountain biking, climbing, and canoeing: for hillwalkers, there are 55 Munros (mountains above 3,000 feet (910 m) in height) in the park. Two of Scotland’s Great Trails pass through the park: the Speyside Way and the Cateran Trail.

The Highland Wildlife Park also lies within the national park, and the Frank Bruce Sculpture Trail is located near Feshiebridge. This short trail through the woods features sculptures created by Frank Bruce between 1965 and 2009.