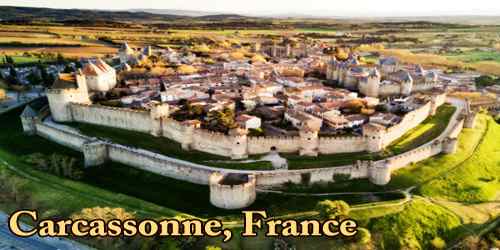 Carcassonne (/ˌkɑːrkəˈsɒn/, also US: /-ˈsɔːn, -ˈsoʊn/, French: kaʁkasɔn; Occitan: Carcassona (kaɾkaˈsunɔ); Latin: Carcaso) is a fortified town in southern France, southeast of Toulouse, near the eastward bend of the Aude River, which divides the city into two towns, the Ville Basse and the Cité. The Cité has the finest remains of medieval fortifications in Europe. A prefecture, it has a population of about 50,000.

The city lies on both sides of the river Aude. Also, the Canal du Midi passes through the town off. The city has an important regional market position because of its central location. Major employers in the region are the government, services, retail, and none the least tourism. It is, after Paris and Mont-Saint-Michel, the biggest tourist attraction in France.

Its citadel, known as the Cité de Carcassonne, is a medieval fortress dating back to the Gallo-Roman period and restored by the theorist and architect Eugène Viollet-le-Duc in 1853. It was added to the UNESCO list of World Heritage Sites in 1997. Consequently, Carcassonne relies heavily on tourism but also counts manufacturing and winemaking as some of its other key economic sectors.

On the summit of an isolated hill rearing abruptly on the Aude’s right bank, the site of the Cité was occupied as early as the 5th century BCE by the Iberians, then by Gallo-Romans. The inner rampart was built in 485 CE when Euric I was king of the Visigoths. Clovis failed to take it in 508, though Muslim invaders succeeded in 728, as did Pippin III the Short in 752. 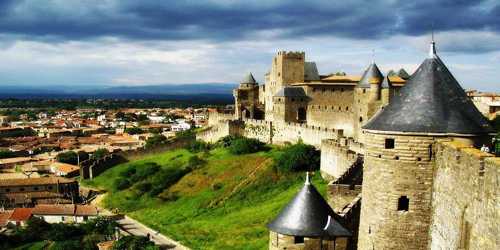 The viscounts of Carcassonne and Béziers built the Basilique Saint-Nazaire (1096–1150), and about 1125 the Château Comtal was incorporated into the Visigothic rampart. In 1247, as a consequence of the Albigensian Wars, the viscounts’ possessions were confiscated by the French crown. Great artworks were then undertaken. The cathedral’s Romanesque transept and choir were replaced by Gothic structures (the Romanesque nave remains). The stained glass is from the 14th to the 16th century. The outer ramparts, also turreted, towered, and crenelated, were built during the reign of Louis IX and continued by his son Philip III, who also added to the inner walls the beautiful Porte (gate) Narbonnaise. The Porte, the only entry into the Cité by road, is guarded by two towers with projecting beaks and a double barbican that forced assailants to expose an undefended flank.

Carcassonne became a border fortress between France and the Crown of Aragon under the Treaty of Corbeil (1258). King Louis IX founded the new part of the town across the river. He and his successor Philip III built the outer ramparts. Contemporary opinion still considered the fortress impregnable. During the Hundred Years’ War, Edward the Black Prince failed to take the city in 1355, although his troops destroyed the Lower Town.

In 1659, the Treaty of the Pyrenees transferred the border province of Roussillon to France, and Carcassonne’s military significance was reduced. Its fortifications were abandoned and the city became mainly an economic center that concentrated on the woolen textile industry, for which a 1723 source quoted by Fernand Braudel found it “the manufacturing center of Languedoc”. It remained so until the Ottoman market collapsed at the end of the eighteenth century, thereafter reverting to a country town.

The actual town center, where the town hall lies, the Ville Basse, and the lower town, or Bastide St. Louis. Which was used in the 13th century as a refuge for residents in the neighborhoods that were built around the former Cité. Two bridges over the Aude connect the old Cité and the new city together, called the Pont Vieux and the Pont Marengo.

Carcassonne is located in the south of France about 80 kilometers (50 mi) east of Toulouse. Its strategic location between the Atlantic Ocean and the Mediterranean Sea has been known since the neolithic era. The town’s area is about 65 km2 (25 sq mi), which is significantly larger than the numerous small towns in the department of Aude. The rivers Aude, Fresquel, and the Canal du Midi flow through the town. 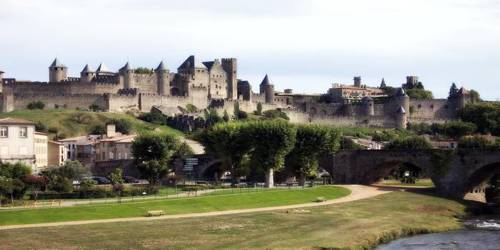 The medieval city of Carcassonne was built on the ruins of an old Roman fortress and found itself at the center of the Albigensian Crusade in the 13C. After the settlements at the foot of the city were destroyed, King St Louis authorized the local inhabitants to build a new town in 1245. This became known as the Bastide Saint Louis.

Carcassonne was the first fortress to use hoardings in times of siege. Temporary wooden platforms and walls would be fitted to the upper walls of the fortress through square holes in the face of the wall, providing protection to defenders on the wall and allowing defenders to go out past the wall to drop projectiles on attackers at the wall beneath, acting much like permanent machicolation.

The French poet Gustave Nadaud made Carcassonne famous as a city. He wrote a poem about a man who dreamed of seeing but could not see before he died. His poem inspired many others and was translated into English several times. Georges Brassens has sung a musical version of the poem. Lord Dunsany wrote a short story “Carcassonne” (in A Dreamer’s Tales) as did William Faulkner. 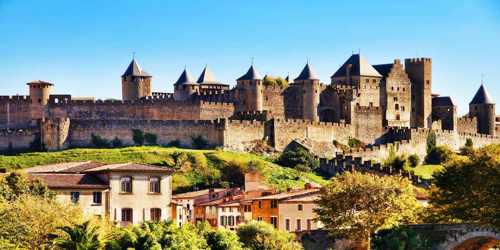 Today, Carcassonne is renowned across the globe thanks to its two UNESCO World Heritage sites, the Medieval City and the Canal du Midi. The history of Carcassonne is re-told in the novels of the Languedoc Trilogy Labyrinth, Sepulchre and Citadel by Kate Mosse. Together with Puivert and Toulouse, it features strongly in her 2018 novel “The Burning Chambers”. The board game series Carcassonne is named after this town and depicts the architecture of the region.