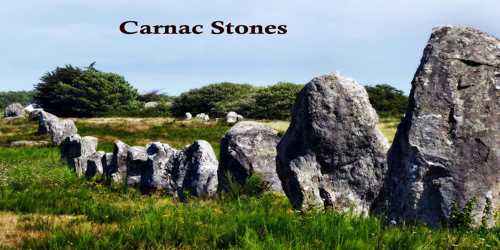 The Carnac Stones (Breton: Steudadoù Karnag) are an exceptionally dense collection of megalithic sites in Brittany in northwestern France, consisting of stone alignments (rows), dolmens (stone tombs), tumuli (burial mounds) and single menhirs (standing stones). The stones have been dated to the Middle Neolithic period (around 3000 BCE) but an exact date has yet to be proposed (some may date to as early as 4500 BCE). There are 11 rows consisting of 1,050 remnants and each one is shrouded in mystery. Most of the stones are within the Breton village of Carnac, but some to the east are within La Trinité-Sur-Mer.

There are over 2,800 standing stones lined up as far as the eye can see, spanning four kilometers across and 40 hectares in total. The tallest standing stone is 4 meters high. By way of comparison, Stonehenge has 83 rocks or lumps of stone visible today, many having been damaged over the years. There are three major groups of stone rows, Ménec, Kermario, and Kerlescan which may have once formed a single group, but have been split up as stones were removed for other purposes. The standing stones are made of weathered granite from local outcroppings that once extensively covered the area. The Carnac Alignments are therefore one of the most authentic and well-preserved megalithic sites in Europe, as well as being the largest.

Although little is known about the people who created them, it is believed that standing stones were established as boundary markers, religious icons, tools of government and forms of memorial to past events. Many appear to have astronomical importance and purpose, perhaps for worshipping or celebrating solar and lunar events. In Europe, many megaliths formed a simple portal tomb: large upright stones with flat capstones across the top. Human remains have been found at many, indicating religious connotations and possible sacrificial ceremonies. 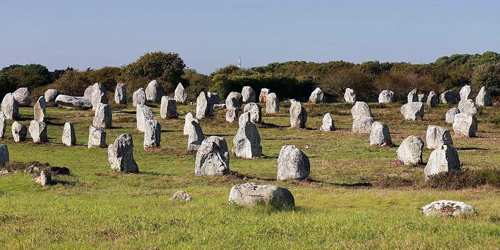 The site includes groupings of megaliths, burial mounds, and enclosures, representing an extraordinary feat of construction for Neolithic peoples. The arrangements are long thought to have served some magical or religious purpose but no one is quite sure what one popular legend has it that when the Roman army was marching on Brittany the wizard Merlin appeared and turned them to stone. Historians studying the site have proposed that the lines of stones, in fact, delineate a sacred space, perhaps leading people toward an area of worship.

In recent centuries, many of the sites have been neglected, with reports of dolmens being used as sheep shelters, chicken sheds or even ovens. Even more commonly, stones have been removed to make way for roads, or as building materials. The continuing management of the sites remains a controversial topic.

The Carnac Stones are free to visit from October to March. But from April to September, people can only visit them as part of a paid guided tour. This is to avoid overcrowding in France’s busiest tourist season and to ensure that they remain some of the best-preserved stones in Europe. The site at Ménec has a car park, and given the isolated location of the stones, it’s definitely best to visit by car. There’s an information point at Ménec called the Maison des Mégalithes, which is a helpful place to find out more about these neolithic alignments. They can also organize visits and workshops.

In recent years, the management of the site has also experimented with allowing sheep to graze among the stones, in order to keep gorse and other weeds under control.