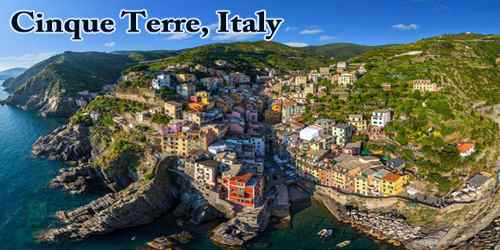 The Cinque Terre (Italian pronunciation: ˈtʃiŋkwe ˈtɛrre; Ligurian: Çinque Tære, meaning “Five Lands”) is a string of five fishing villages perched high on the Italian Riviera in the region Liguria, which until recently were linked only by mule tracks and accessible only by rail or water. It lies in the west of La Spezia, and comprises five villages: Monterosso al Mare, Vernazza, Corniglia, Manarola, and Riomaggiore.

The Cinque Terre, recognized in 1997 by the Unesco Mankind’s World Heritage, are today a National Park and Protected Marine Area with the aim of protecting this great cultural heritage and natural environment.

The Cinque Terre area is a popular tourist destination. The Cinque Terre is noted for its beauty. Over centuries, people have carefully built terraces to cultivate grapes and olives on the rugged, steep landscape right up to the cliffs that overlook the Mediterranean Sea. Paths, trains, and boats connect the villages as cars can reach them from the outside only via narrow and precarious mountain roads with great difficulty. 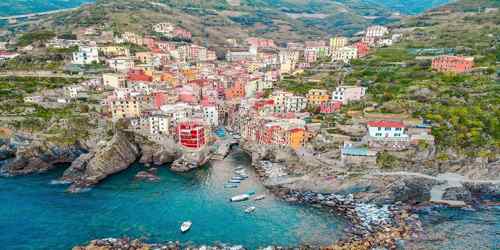 The main languages spoken in Liguria are Italian and English. However, French, German or Spanish are also used. Euro is the only currency in circulation.

Monterosso is the largest of the five coastal villages known as the Cinque Terre. The village is located on hills cultivated with lemons, vines, and olives. It’s amazing beaches, it’s beautiful reefs and the sea’s crystal clear waters make this small village one of the most hospitable of the Ligurian Riviera.

The small fishing village Vernazza is probably the most characteristic of the Cinque Terre and is classified as one of the most beautiful villages in Italy. Vernazza was founded about 1000 A.D. and was ruled by the Republic of Genoa starting in 1276. The medieval castle, Belforte, was built in the mid-1500s, primarily to protect the village from pirates.

Corniglia is located in the middle of the Cinque Terre and lays on a small cape, 100 meters above the sea. It is the only town without access to the sea. The tiny village is connected to its train station by a footpath known as Lardarina (377 stairs). Corniglia is an ancient Roman village that has a long and rich agricultural tradition. The village is surrounded on three sides by vineyards and terraces. Its architecture is closer to that of a rural inland village than that of a coastal village.

Manarola, built on a high rock 70 meters above sea level, is one of the most charming and romantic of the Cinque Terre villages. The tiny harbor features a boat ramp, picturesque multicolored houses facing the sea, a tiny piazza with seafood restaurants.

Riomaggiore is the most southern village of the Cinque Terre, situated just a few minutes by train from La Spezia. It is quite sure that the origins of Riomaggiore date back to the 8th Century, when the inhabitants of the Vara valley, searching a milder climate to raise grapevines and olive-trees without the fear of pirate raids, moved towards the coast.

Cinque Terre is mentioned in documents dating to the 11th century. Monterosso and Vernazza were settled first and the other villages grew later, whilst within the territory of the Republic of Genoa. In the 16th century, the inhabitants reinforced existing forts and built new defense towers to defend the area from attacks by the Turks. Cinque Terre experienced an economic decline from the 17th to 19th centuries, recovering when an arsenal was built in La Spezia and it gained a railway link to Genoa. The railway led to migration from the area and a decline in traditional industries until the growth of tourism from the 1970s onwards brought some prosperity.

The predominant crops in the area have been grapes and olives. Some fishermen were based in Monterosso, but the area’s gaily painted fisherman’s cottages were conceived in the late 1970s as a tourist attraction. 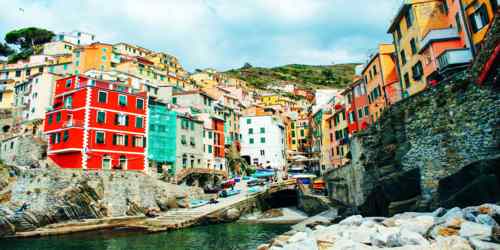 Time to Visit the Cinque Terre –

Working out the best time to visit Cinque Terre will depend on whether visitors want to hike, swim or just go sightseeing. If they would like to spend time at the beach and go swimming, then summer is when the water is warmest.

The trouble is that the Cinque Terre is busiest in the summer months of July and August. What’s more, the Italian sun can be quite strong then, and hiking in that heat can be rough. Then there’s the matter that many things close down in August when Italians go on holidays.

For comfortable weather and good hiking conditions, it’s better to consider planning to visit Cinque Terre in the shoulder season months of April, May, and September.

Access to Cinque Terre by car is limited. A road to Vernazza is very narrow and ends a kilometer before the town. Trains run from La Spezia to all five towns within Cinque Terre, as well as to major regional and national destinations.

A passenger ferry runs between the villages except for Corniglia. The ferry also runs to Genoa’s Old Harbour, La Spezia, Lerici, and Porto Venere.

A walking trail, known as Sentiero Azzurro (“Azure Trail”), used to connect the five villages but the section from Riomaggiore to Manarola called the Via dell’Amore (“Love Walk”) is closed. It is still possible to walk between these villages, although the trail is both steeper and longer than the (closed) path along the waterfront.