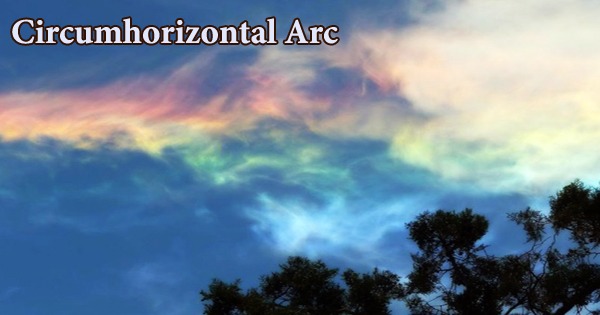 Circumhorizontal arcs, often known as “fire rainbows,” are an optical phenomenon caused by the refraction of sunlight or moonlight in plate-shaped ice crystals floating in the sky, most commonly in cirrus or cirrostratus clouds. These arcs are most usually seen in cirrus or cirrostratus clouds, and they may be identified from 22-degree halos by the distance at which they appear below the sun or moon, which is twice the distance at which the 22s occur. The arc appears as a broad, brightly spectrum-colored band (red being the topmost color) running parallel to the horizon, far below the Sun or Moon, in its full form.

Only parts of the arc are visible when the halo-forming cloud is tiny or patchy. It can be caused by the Sun or (far less frequently) the Moon, as with all halos. When the light source’s angular elevation is around 68°, the circumhorizontal arc, if visible, contacts the bottom section of the 46° halo. These two halo types are increasingly separated with a light source further from 46°. The arc may be visible even if the 46° halo isn’t. Circumhorizon arcs have a fuzziness about them. Similar to solar and lunar halos, they are formed by ice crystals in cirrus clouds. Water droplets, on the other hand, cause iridescence.

This occurrence is occasionally referred to as a “fire rainbow,” despite the fact that it is neither a rainbow nor related to fire in any way. The sun must be over 58 degrees above the horizon for a circumhorizon arc to form. Iridescence is difficult to photograph since it happens near to the sun. The term, which appears to have been invented in 2006, may have come from the arc’s appearance as “flames” in the sky when it occurs in fractured cirrus clouds.

A fire rainbow is one of the few forms of halos created by light refraction in plate-shaped ice crystals intermingled in the atmosphere, and it is most commonly seen in cirrus clouds. The halo is created when sunlight passes through a vertical side face of horizontally oriented, flat, hexagonal ice crystals and exits through the near horizontal bottom face (plate thickness does not affect the formation of the halo). Clouds can be divided into three groups based on their altitude: low level, middle level, and high level.

The arc can be produced by Parry-oriented column crystals in theory, although this is uncommon. The well-separated spectrum colors are produced by the 90° slope between the ray entrance and exit sides. Only when the Sun is at least 58 degrees above the horizon can a flaming rainbow be seen. The hexagonal ice crystals through which the light disassembles into constituent colors must have their faces parallel to the ground.

At other latitudes, a lunar circumhorizon arc may be viewed, but it is extremely unusual because it requires a nearly full Moon to create enough light. Around the summer solstice, the solar circumhorizontal arc is visible at other latitudes for a longer or shorter period of time. Light refracts when it enters via the vertical side face of these ice crystals and exits through the bottom face, changing its line of travel (i.e., it bends). Circumhorizontal arcs are sometimes confused with cloud iridescence, especially when just pieces are visible.

This phenomenon likewise causes clouds to seem multicolored, but it is caused by diffraction rather than refraction (usually by liquid water droplets or ice crystals). Cirrus clouds are also wispy, resembling a flame, which is why this occurrence is commonly referred to as a fire rainbow. Between May and July, the Sun is only visible for a measly 140 hours in London, for example. Between March and September, the Sun shines high enough in the sky for 670 hours in Los Angeles. In addition, European weather is frequently cloudy.

A flaming rainbow, a high-level cloud occurrence, would most likely be obscured by low- and middle-level clouds, making it even more difficult to see in Europe. Other halo family members, such as sun dogs or the circumzenithal arc, may cause confusion, but these are easily distinguished by their very different positions in reference to the Sun or Moon. The distinction between the circumhorizontal and infralateral arcs, which almost totally overlap when the Sun or Moon is at a high height, is more difficult. The color sequence in cloud iridescence is not always fixed, i.e., the color sequence in them is random.