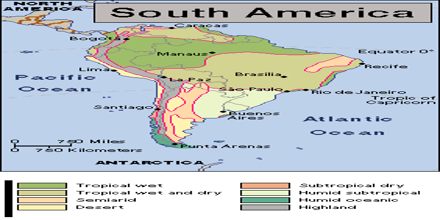 The aim of this lecture is to present on Climate of South America. South America has both rainforests and deserts. Half of the rainforest in the world is in the Amazon region. The most famous rainforest is the Amazon rainforest, which also contains the large Amazon River. The largest desert areas are in Chile, which is the driest part of the continent. The final most notable feature of the continent is the mountain ranges, which are highlighted by the Andes mountains. Andes stretch 4,000 miles from the north to the south, thus making it the longest mountain range in the world. In Chile, it rises to over 20,000 feet.