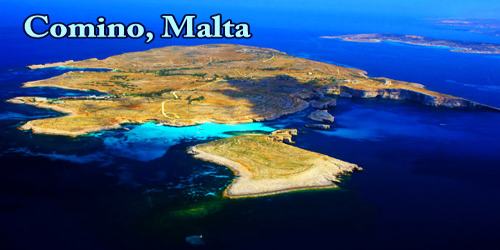 Comino (Maltese: Kemmuna), formerly called Ephaestia (Ηφαιστεία in Ancient Greek) is the smallest inhabited island in the Maltese archipelago, and also the quietest one. It is one of the Maltese islands, in the Mediterranean Sea, separated from Malta to the southeast and Gozo to the northwest by narrow channels. It has an area of 1 square mile (3 square km). Comino boasts three popular beaches St. Nicholas Bay, St. Mary’s Bay, and the sought-after Blue Lagoon (also known as Bejn il-Kmiemen). Apart from the stretch of beaches, Comino’s coastline is sharp and craggy.

Only 3.5 square kilometers, Comino is car-free and apart from one hotel, is virtually uninhabited. The island’s main attraction is the Blue Lagoon. In summer, this sheltered inlet of shimmering aquamarine water over white sand is very popular with day-trippers. Other beaches on the island include Santa Marija Bay and San Niklaw Bay. 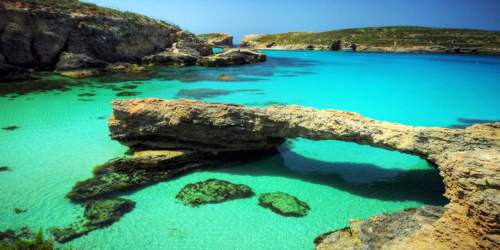 Comino was the site of a fortress of the Hospitallers (Knights of Malta, or Knights of St. John of Jerusalem); a tower (1618) of the fortress survives. Beeswax and grapes are produced as well as honey of very fine quality. Goats, sheep, and pigs are also bred. In addition to the tourist population that frequents the island’s single resort, Comino has a handful of permanent residents.

Lodged between the larger Gozo and Malta islands, one can easily do a day trip to Comino’s nature reserve, or stay longer. Enjoy the birds, the azure sea beyond the cliffs, and the sheer serenity. On windy days visitors or travelers will see little yachts circling the island. Visitors or travelers can easily hike around the entire island in one day. There’s one public camping site where they can pitch their tent for free.

Comino was inhabited in the Roman period but did not have much significance until the Knights arrived. It then had a dual role: hunting grounds and a staging post in the defense of the Maltese Islands against the Ottoman Turks.

The island had proved a useful base for pirates operating in the central Mediterranean and, though stark and barren today, it was home to wild boar and hares when the Knights arrived in 1530. The Grandmasters went to great lengths to ensure that their game on Comino was protected: anyone found breaking the embargo on hunting could expect to serve three years rowing on a galley. After WWII, Comino remained a backwater until its fortunes revived with tourism in the mid-1960s.

During the French occupation of Malta, Comino served as quarantine and existing buildings served as an isolation hospital. The island served as a temporary prison site before a decision on the accused is taken.

On 6th March 1889, the British battleship HMS Sultan grounded on an uncharted rock in the Comino Channel, ripping her bottom open. She slowly flooded and, in a gale on 14th March 1889, she slipped off the rock and sank. The Italian firm of Baghino & Co raised her in August 1889 for a fee of £50,000. On 27 August, Sultan was brought into Malta. 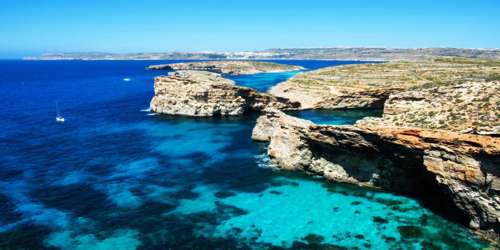 Comino is also worth a visit in winter and is ideal for walkers and photographers. With no urban areas or cars on the island, one can easily smell the scent of wild thyme and other herbs. Comino is a popular location for filmmakers. It appears in the feature films Troy, The Count of Monte Cristo (in which St. Mary’s Tower is featured as the Château d’If), and Swept Away. Comino has one resort hotel, which is ideal for those looking for a tranquil getaway.