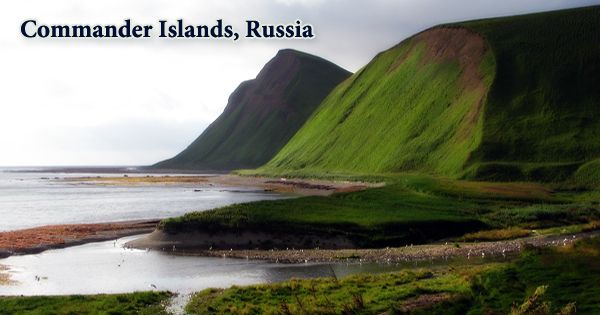 The Commander Islands, also known as the Komandorski Islands, or the Komandorskie Islands (Russian: Командо́рские острова́, Komandorskiye Ostrova) are known for their large colonies of coastal cliff-lined seabirds and large numbers of different marine mammals. The islands are a group of treeless, sparsely populated Bering Sea islands situated approximately 175 kilometers (109 mi) east of the Kamchatka Peninsula in the Far East of Russia. Additionally, the Commander Islands are also known for their heavy fogs (with July being the foggiest month). The best months to visit the Commander Islands are from June to September, when the local wildlife can be seen by visitors/tourists in all its diversity: thousands of marine mammal colonies, bird rookeries, and migrations of whales.

The climate of the islands, mixing low temperatures with high humidity and strong winds, is very harsh. Frequent storms and the likelihood of tsunamis define the autumn weather here (with waves reaching 10-40 m in height). The Commander Islands has some of the world’s largest marine mammal rookeries. These islands are the westernmost of the Aleutian Islands, most of which are part of the state of Alaska in the United States, and are 207 miles (333 km) away from the nearest island in the United States, Attu Island, and the rest of the chain. The geologic sources on the edge of the Pacific and North American Plates are long-extinct volcanoes. At 755 meters, the highest point is Steller Peak on Bering Island (2,477 ft). Stenjeger Peak, at 647 meters, is the highest point on Medny Island (2,123 ft).

Also notable for its bird rookeries are the Commander Islands. On the coastal cliffs of the Bering and Medny islands, marine birds have made their homes. And the names of Tufted Puffin Rock and Kamen Ariy, the small rocky islands, speak for themselves (“Ayrah” in Aleutian means “guillemot”): these are the locations of the largest rookeries of birds. There are over 220 species of birds on the Commander Islands in total, of which over 30 are on the Red List of Endangered Species. The climate, with frequent precipitation (220–240 days/year), is relatively mild and maritime; notoriously, the mild summers are foggy.

The islands, discovered in 1741 by Commander Vitus Bering, are remarkable in their wildlife of both American and Asian origin. The islands were declared a zapovednik (Federal Nature Reserve) in 1993 and have since been included in UNESCO’s World Network of Biosphere Reserves. Nikolskoye village, which has a population of less than 1000 people, is the only permanently inhabited area. Medny is the second-largest island in the Commander archipelago, situated several hundred kilometers off the coast of Bering Island. It is 57 km long and 8.4 km high. There are a number of large bays on the island: Peschanaya, Zhirovaya, Korabelnaya, and Lagoon Lakes. The island as a whole is covered in mountains.

Much of the territory of the islands, as well as much of the surrounding marine habitat, 36,488 square kilometers (14,088 sq mi), is taken up by a natural preserve, the Komandorsky Zapovednik. The economy is mainly focused on fishing, mushroom collecting, zapovednik (i.e. strictly protected wilderness) administration, ecotourism and government services. The third largest island is called Tufted Puffin Rock. It’s situated north-west of the island of Bering. With a diameter of 2 km, the island is just 0.25 square km in size. The island is renowned for its extensive bird nesting, primarily represented by puffins, seagulls and cormorants.

There is no real forest on the Islands of Commander. Lichens, mosses and numerous associations of marshy plants with low grass and dwarf trees dominate the vegetation. There are also very tall umbellifers that are common. The region fosters an abundance of wildlife because of the remoteness from human influence. Large numbers are located along the coasts of northern fur seals, Steller’s sea lion, sea otter and spotted seal, while the surrounding waters are a significant habitat for many species of whales. Sperm whales, beaked whales, orcas and right whales are all feeding and migrating here. The terrestrial mammals of the islands are much less diverse, but they include two endangered Arctic fox subspecies.

And finally, Kamen Ariy is the group’s smallest island. Situated about 6 km away from Bering Island, it is a 53-meter-high rock with a diameter of about 1 km. This island, like Toporkov, is a breeding place for many birds, with guillemots, cormorants, horned puffins, and black-legged kittiwakes being the most typical local animals. Furthermore, Steller sea lions, Kuril harbor seals, spotted seals, northern fur seals, and sea otters are home to the island’s cliffs.

The large colonies of seabirds which nest on the coastal cliffs are one of the main highlights. Over 200 bird species, including the impressive Steller’s sea eagle, have been reported, while Brünnich’s guillemot, horned and tufted puffin, cormorant, and red-legged kittiwake are popular visitors. The population of the islands today is roughly 2⁄3 Russian and 1⁄3 Aleut.