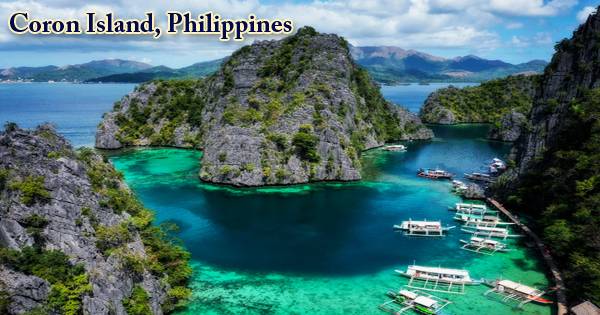 Coron Island, which is the third-largest island in the Calamian Islands, is situated in North Palawan in the Philippines. The island belongs to the greater municipality of the same name. This island has an intimidating, mysterious skyline, only a 20-minute Bangka ride from Coron town, which wouldn’t be out of place in a King Kong movie. It is approximately 170 nautical miles (310 km) southwest of Manila and is renowned for its World War II vintage Japanese shipwrecks. The entire region is protected by many legal proclamations because of its unique ecological features. Coron is one of the Philippines’ most amazing islands, with immense limestone cliffs, multicolored lagoons, and some of the country’s best coral reefs.

Coron Island is approximately equidistant from Puerto Princessa City and Manila. The island has a rough topography, typically mountainous, with steep rocks and ravines defining its landscape. The island and the adjacent fishing grounds form part of the ancestral territory of the Tagbanwa indigenous people, officially designated as such on 5 June 1998. Its tribal chieftain, known among the Tagbanwas and Coronians as Calis, is Rodolfo Aguilar I. Nearly 70% of the region is made up of Rocky Mountains, 25% is rolling hills and 5% is relatively flat. Approximately 18 percent of the total area is occupied as residential and agricultural land by the Tagbanua, as rock formations almost dominate the entire area. 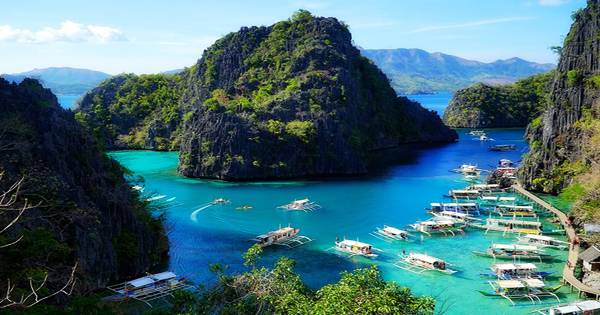 Visitors or travelers see flying over Coron that the fortress-like, jungle-clad interior is mostly inaccessible terrain pockmarked with lakes, two of which can be visited, Kayangan Lake and Barracuda Lake. Two barangays of the municipality of Coron form the island: Banuang Daan and Cabugao. The entire island is the ancestral domain of the indigenous Tagbanua tribe, who are mainly fishermen and collectors of the very lucrative balinsasayaw (nests of birds). There are vertical cliffs of limestone that reach up to 600 meters above sea level and eight brackish lakes and three smaller ones that are connected to the sea underground.

Coron Island faces the Sulu Sea partly between the islands of Busuanga and Culion and forms the eastern side of Coron Bay. From north to south, it is about 20 kilometers (12 mi) long, and at its widest point, it is 9 kilometers (5.6 mi). Coron Island is a wedge-shaped limestone island inhabited by the Jurassic Permian Limestone, with mangrove forests covering only a few of its coastal areas. It is located in the group of islands of the Calamianes and belongs to the Municipality of Coron. Nestled in the rough terrain, there are 11 lakes, of which 3 have underground links to the sea. In the coastal areas, there are a few mangroves.

There are hundreds of small islands and sunken World War II shipwrecks in the region around Coron Bay, making it almost a paradise for scuba diving and tropical island hopping. With its unusual layers of fresh, salt and brackish water and drastic temperature changes underwater (it can get as hot as 38 ° C), Scenic Barracuda Lake is of interest to divers. A quick climb over a jagged, rocky wall that ends directly at the edge of the water makes it open. The area around the wrecks (Coron Island) has rock formations that provide snorkeling opportunities, with visibility underwater reaching up to 80 feet (24 m). Sometimes the water is calm. In the Philippines, Coron is one of the most visited wreck diving destinations. In depths as shallow as 10-30 feet (3.0-9.1 m) and as deep as 120-140 feet (37-43 m), wreck dive sites are located. Most are in the range of 18-24 m (approximately 80 feet). 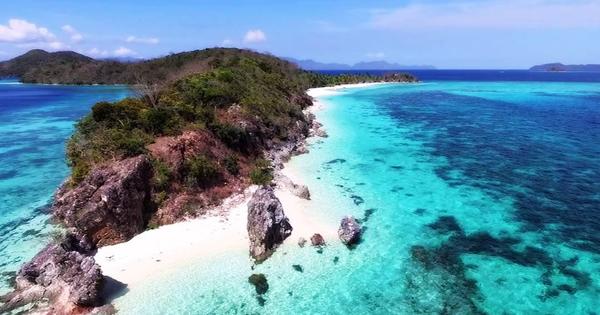 Dive sites around Coron include several different reef dive sites and “Günter´s Cave” also known as the Cathedral Cave because the sun casts a light beam through a hole in the cave ceiling at a certain time of the day, lighting the inside. Banol Beach, a small sandy area with protection from the sun, and the photogenic Twin Lagoon, half of which is reached by swimming through a narrow crevice, are other places available to visitors. In the cave, it is possible to surface, as the cave-ceiling opening allows fresh air to enter. The cave is named after Günther Bernert, who after hearing from local fishermen about its presence, was part of the first diving party to explore the cave.

There are some significant drug and violent crime problems in the Philippines, but this hasn’t touched the small, remote town of Coron and it’s been a popular tourist spot for many years now. In Forbes Traveler Magazine’s top 10 best scuba diving sites in the world, the underwater views from the sunken Japanese ships off Coron Island are listed. This gem of a mountain, surrounded by giant walls of limestone cliffs, surrounds the stunning and large Coron harbor, where there are more natural wonders. As the top draw for Coron Island in the last decade, ecotourism has long exceeded diving.