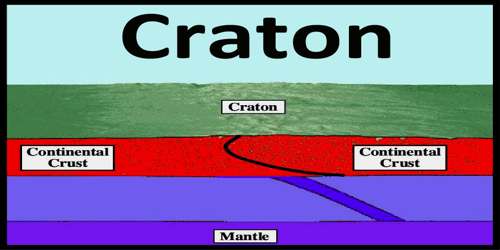 Craton is a large portion of a continental plate that has been relatively undisturbed since the Precambrian era and includes both shield and platform layers. Having often survived cycles of merging and rifting of continents, cratons are generally found in the interiors of tectonic plates. They are characteristically composed of ancient crystalline basement rock, which may be covered by younger sedimentary rock. The word craton was first proposed by the Austrian geologist Leopold Kober in 1921 as Kratogen, referring to stable continental platforms, and orogen as a term for mountain or orogenic belts. Later authors shortened the former term to kraton and then to craton.

The term craton is used to distinguish such regions from mobile geosynclinal troughs, which are linear belts of sediment accumulations subject to subsidence (i.e., downwarping). The extensive central cratons of continents may consist of both shields and platforms. A shield is that part of a craton in which (usually) Precambrian basement rocks crop out extensively at the surface. By contrast, in a platform the basement is overlain by horizontal or subhorizontal sediments.

Cratons are surrounded by orogenic (mountain building) or mobile belts, within which deformation has been localized. For example, cratons comprised of Archean granite-greenstone terrains and Paleoproterozoic sedimentary sequences in Africa, central India and Western Australia are rimmed by Mesoproterozoic and Neoproterozoic orogenic belts, many of which have been subsequently reactivated during rifting and the formation of Paleozoic sedimentary basins. Only minor reactivation of older structural weaknesses occurs in craton interiors during deformation on their margins.

Structure and Formations of Craton There is no strict age connotation to the term “craton”, and implied age depends on context. In a context of mantle keels, diamonds and kimberlites, there often is an implicit tendency to equate cratons with stable crust of Archean age. Elsewhere, however, e.g. in the context of younger continental reconstructions such as that of Rodinia or Pangaea, cratons are typically large crustal fragments (e.g., Laurentia) that were only amalgamated and attained stability during the Proterozoic. There are ca. 35 large crustal fragments of Archean age around the globe, the Archean cratons (s.s.).

An associated class of inclusions called eclogites consists of rocks corresponding compositionally to oceanic crust (basalt) that has metamorphosed under deep mantle conditions. Isotopic studies reveal that many eclogite inclusions are samples of ancient oceanic crust subducted billions of years ago to depths exceeding 150 km (90 mi) into the deep kimberlite diamond areas. They remained fixed there within the drifting tectonic plates until carried to the surface by deep-rooted magmatic eruptions.

Favorable pressures and temperatures for the formation and preservation of diamond are found beneath cratons. Diamond crystallizes from liquid carbon between 1652°–2192°F (900–1200°C) at pressures above 50 kbar. At this pressure, equating to a depth of 93 mi (150 km) or more, temperatures are generally too high for the formation of diamond except in the roots beneath cratons. Most of the world’s diamonds come from deep, mantle-sourced intrusive bodies such as kimberlites or lamproites that intrude Archaean cratons. Kimberlite and lamproite magmas intrude extremely rapidly up deep fractures and may bring diamonds to shallow levels in the crust. Near the earth’s surface, they erupt explosively due to their high gas pressures, creating breccia pipes (called diatremes) and craters. Earth’s surface was probably broken up into many small plates with volcanic islands and arcs in great abundance. Small protocontinents (cratons) formed as crustal rock was melted and remelted by hot spots and recycled in subduction zones. The physical and/or chemical properties of the deep roots of cratons enable them to resist recycling into the underlying asthenopsheric mantle. This may be responsible for the stability of cratons. Isotopic signatures obtained from mantle lithosphere-derived, peridotite xenoliths and inclusions in diamonds imply that roots to Precambrian cratons have been isolated from the convecting mantle for billions of years. Archean subcontinental lithospheric mantle is buoyant relative to the underlying asthenosphere. It is therefore not easily delaminated and assimilated into the asthenosphere and will tend to be preserved. Geochemical changes may also impart stability to cratonic roots.