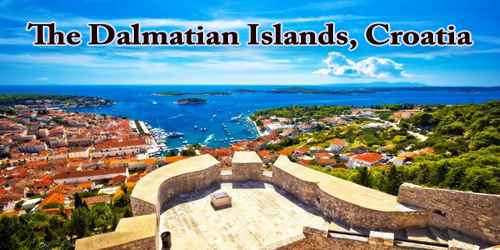 Dalmatia (/dælˈmeɪʃə, -tiə/; Croatian: Dalmacija (dǎlmaːtsija); Italian: Dalmazia), the region of Croatia, comprising a central coastal strip and a fringe of islands along the Adriatic Sea. It is one of the four historical regions of Croatia, alongside Croatia proper, Slavonia, and Istria. Its greatest breadth, on the mainland, is about 28 miles (45 km), and its total length, from the Kvarner (Quarnero) gulf to the narrows of Kotor (Cattaro), is about 233 miles (375 km).

The Dalmatian Islands are an enchanting mix of relaxed charm and rich history. Quaint villages and boutique hotels and restaurants dot these gorgeous isles, which are surrounded by sparkling seas. Top on the list is Brač with the famous beach strip of Zlatni Rat (Golden Horn). Hvar is also beautiful with its Gothic churches, car-free old town, and picturesque fishing harbor. Other must-see Dalmatian islands include Korčula with its red-roofed white-washed buildings, Mljet with its two inland saltwater lakes, and relatively uncrowded Vis.

The name of the region stems from an Illyrian tribe called the Dalmatae, who lived in the area in classical antiquity. Later it became a Roman province, and as result a Romance culture emerged, along with the now-extinct Dalmatian language, later largely replaced with related Venetian. With the arrival of Croats to the area in the 8th century, who occupied most of the hinterland, Croatian and Romance elements began to intermix in language and culture. After the Medieval Kingdom of Croatia fell in 1102, its cities and lands were often conquered by, or switched allegiance to, the kingdoms of the region during the Middle Ages. 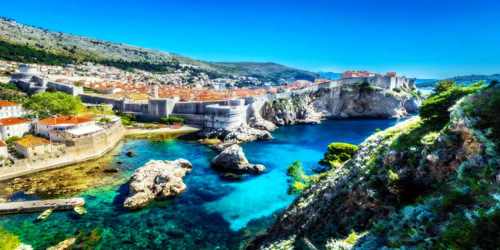 A rugged and barren range of mountains, the Dinaric Alps, divides Dalmatia from the interior. With peaks ranging from 1,500 feet (450 m) to more than 6,200 feet (1,900 m), the Dinaric Alps offer only two main passes: the Krka River canyon and the Neretva River valley. The Dalmatian coastline has numerous bays and harbours and is noted for its scenic beauty. The climate is mild, with dry summers, abundant rain in autumn and winter, and very little snow.

The longest-lasting rule was the one of the Republic of Venice, which controlled most of Dalmatia between 1420 and 1797, with the exception of the small but stable Republic of Ragusa (1358–1808) in the south. Between 1815 and 1918, it was a province of the Austrian Empire known as the Kingdom of Dalmatia. After the Austro-Hungarian defeat in the First World War, Dalmatia was split between the Kingdom of Serbs, Croats, and Slovenes which controlled most of it, and the Kingdom of Italy which held several smaller parts, and after World War II, the Socialist Republic of Croatia as a part of Yugoslavia took complete control over the area. Following the dissolution of Yugoslavia, Dalmatia became a part of an independent Croatian state.

Farming is dominated by permanent crops (olives, figs, caroub, almonds), but also supports remnants of pastoral systems as well as cultivation of medicinal and aromatic plants. The key issues faced by the area are: agricultural and rural development policies, abandonment and “reconquest” of marginal Mediterranean lands. The area is a ground for local action group activities and successful participatory projects.

The name Dalmatia derives from the name of the Dalmatae tribe, which is connected with the Illyrian word delme meaning “sheep”, compare the Albanian word for sheep, delmë. Its Latin form Dalmatia gave rise to its current English name. In the Venetian language, once dominant in the area, it is spelled Dalmàssia, and in modern Italian Dalmazia. The modern Croatian spelling is Dalmacija, pronounced (dǎlmaːt͡sija). Dalmatia is referenced in the New Testament at 2 Timothy 4:10, so its name has been translated in many of the world’s languages.

Dalmatia’s principal cities are Zadar, Split (Spalato), Šibenik (Sebenico), Dubrovnik (Ragusa), Trogir (Trau), Korčula, and Kotor. The region’s economy is mainly agricultural. The soil is unsuitable for the cultivation of cereal grains but favors olive trees, vegetables, and, above all, vines. Dalmatian vineyards are rich in wine production. There are deposits of bauxite that are exploited by the aluminum refinery near Šibenik. Abundant reserves of limestone coming from the neighborhood of Split account for much of Croatia’s cement output. There are also chemical factories as well as food-processing plants. Major shipbuilding yards are at Split. The rivers, except for a few miles on the Krka and on the Neretva, are unsuitable for navigation, but their precipitous fall makes them a natural source of hydroelectric power. Tourism has become a major economic factor; Dubrovnik and Split are major Mediterranean tourist attractions.

The largest Dalmatian mountains are Dinara, Mosor, Svilaja, Biokovo, Moseć, Veliki Kozjak, and Mali Kozjak. The regional geographical unit of historical Dalmatia the coastal region between Istria and the Gulf of Kotor includes the Orjen mountains with the highest peak in Montenegro, 1894 m. In present-day Dalmatia, the highest peak is Dinara (1913 m), which is not a coastal mountain, while the highest coastal Dinaric mountains are on Biokovo (Sv. Jure, 1762 m) and Velebit (Vaganski vrh, 1757 m), although the Vaganski vrh itself is located in Lika-Senj County. 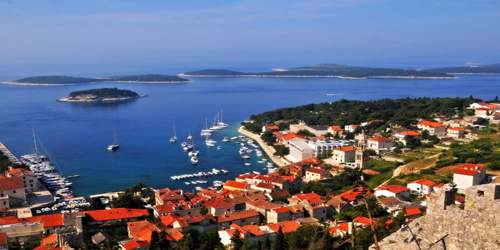 Dalmatia has a potential to develop into a world-known and popular holiday destination primarily to its beautiful and often untouched nature. In Dalmatia there is so much more than the beautiful Adriatic Sea and the amazing beaches along the coast, there are also other natural attractions that are worth visiting. The four national parks that are situated in Dalmatia attract a growing number of domestic and foreign tourists.

In antiquity the Roman province of Dalmatia was much larger than the present-day Split-Dalmatia County, stretching from Istria in the north to modern-day Albania in the south. Dalmatia signified not only a geographical unit, but was an entity based on common culture and settlement types, a common narrow eastern Adriatic coastal belt, Mediterranean climate, sclerophyllous vegetation of the Illyrian province, Adriatic carbonate platform, and karst geomorphology.

In South Dalmatia there are also plenty of beautiful islands which are absolutely worth visiting. Some of the islands in this part of Dalmatia are Korcula, Lastovo, Mljet, the Elaphites and the peninsula of Peljesac. The island of Mljet has been proclaimed a National Park due to its rich nature and beauty while the Lastovo archipelago was proclaimed a Nature Park. Both of them are absolutely worth visiting, especially if visitors like to enjoy their vacation surrounded by beautiful, untouched nature.