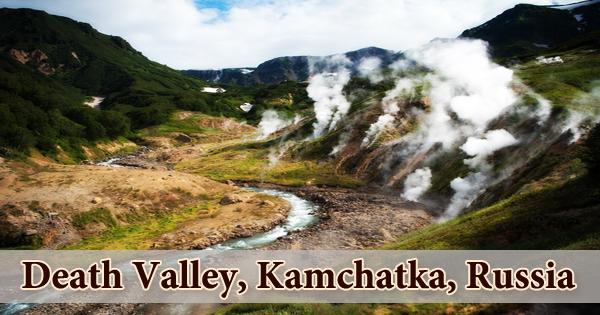 The official history of Kamchatka’s Death Valley, Russia, starts several years after the emergence of the reserve. Nobody knew about it for a long time, measured in years, although it is in the immediate vicinity of the famous Geysers Valley, which is respected and enjoyed by both scientists and visitors. It lies at the foot of the Kikhpinych volcano in the upper Geyzernaya river on the territory of the famous Kronotsky Reserve. This small area, no more than 2 kilometers long and no more than 100-500 meters high kills animals and birds daily.

The history of this place usually starts well before the moment it was found. The founder of this valley, with its often ruthless and inexplicable phenomena: volcanic eruptions, boiling lava, minerals, and gases in the bowels of the earth, is not a human being, but nature. It is a land of paradoxes, a land that includes not only a place of life but also death as an inseparable part of it.

Kronotsky Reserve was established in 1934, but for quite a long time, some sections remained unexplored. So was the discovery of the valley, which turned out to be extraordinarily unusual: a nearby popular tourist road, and geologists frequently explored the local geysers at that time. But only in 1975 was the anomaly detected; since then, exploration of the Valley has begun. Scientists have been in the vicinity of the deadly valley for many years. Forester VS Kalyaev and volcanologist Leonov VL discovered it. This occurrence was very important and very important in the history of the reserve from the first day.

For the first few years, scientists collected more than 200 bodies containing various fauna: 12 species of mammals, 15 species of birds, and several species of insects. Tiny rodents and sparrow birds were the majority of the casualties, but bears, foxes, wolverines, ravens and Steller sea eagles were also among them. The golden eagle, lynx and dog have now all been added to this list. In summer, as the ice starts to melt, a number of animals enter the valley, including rabbits and birds; most of them died there immediately. Volcanoes are the source of animal deaths, according to Vladimir Leonov, a volcanologist at the Russian Institute of Volcanology and Seismology.

Several groups of scientists and volunteers who split the food chain in the natural world live and work permanently close to the Death Valley in Kamchatka, Russia. They only take away animal corpses so that big animals do not live in their territories. In order to save the lives of many animals, these acts support. On the way to the concentrated gas emissions that fill the basin with hydrogen sulfide, carbon dioxide, carbon-sulfur, and other toxic gases, the Valley is situated. The environment is full of dense layers of sulphur and that is why animal bodies do not rot for too long: due to the toxic atmosphere, even bacterial activity is suppressed.

Public entry to the Valley of Death, however, is practically banned. This section of the Gezarnaya River has dangerous glaciers. The icy animals’ bodies are scattered everywhere. The death of the local living creatures takes place in a certain order. Also, some impressive characteristics associated with death in this position are worth remembering. To overcome these mysterious realities, scientists are still scratching their heads. Scientists claim that animals have been destroyed by gases such as sulfur dioxide and hydrogen peroxide. Scientists claim that people could be killed by more than the amount of gas on the peninsula. The Death Valley, despite such a tragic story, is as beautiful as any other part of the Kronotsky Nature Reserve.