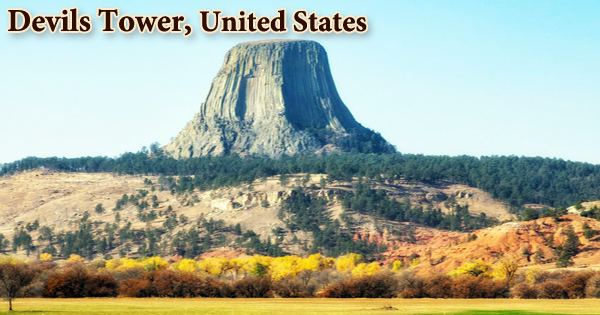 Devils Tower, also known as Bear Lodge Butte, is a butte made of igneous rock in the Bear Lodge Ranger District of the Black Hills, above the Belle Fourche River, near Hulett and Sundance in Crook County, northeastern Wyoming. In northeastern Wyoming, it is a 264-meter (867-foot) rock formation. Phonolite porphyry is used to build Devil’s Tower. The igneous rock phonolite porphyry was formed when magma or lava cooled. The magma that formed Devils Tower condensed into columns as it cooled. The majority of the columns in Devils Tower are hexagonal (six-sided).

Understanding Devils Tower necessitates a variety of viewpoints. For thousands of years, ancient civilizations have resided near the Tower, and their modern descendants also have a physical and spiritual link to it. It stands 867 feet (265 meters) from summit to base and rises 1,267 feet (386 meters) above the Belle Fourche River. The mountain rises to a height of 5,112 feet (1,559 meters) above sea level. Since prehistoric times, Devils Tower has been a beacon, attracting people and catching their imaginations. For many people, including American Indians, local ranchers, rock climbers, and thousands of tourists, it still has a lot of value.

President Theodore Roosevelt founded Devils Tower as the first national monument in the United States on September 24, 1906. The monument’s perimeter encompasses 1,347 acres (545 ha). At the request of Wyoming’s first settlers and government leaders, the Tower and surrounding area were given early protection. Locals used it as a summer meeting spot, attracted to the giant rock as humans have done since antiquity. As the Tower gained national recognition and security, more viewpoints were introduced. Around 1% of the monument’s 400,000 annual visitors have ascended Devils Tower in recent years, often using standard climbing techniques.

While Devils Tower was formed by magma, it was most likely never part of a volcano. Most geologists believe that Devils Tower is an igneous intrusion, a location where magma from the Earth’s mantle has welled up between sedimentary rock chunks. Colonel Richard Irving Dodge’s translator allegedly misinterpreted a native name to mean “Bad God’s Tower” during an expedition in 1875, giving rise to the name Devil’s Tower. The name “Devils Tower” is used on all information signs in that city, following a geographic naming standard that eliminates the apostrophe. Devils Tower was most likely formed 65 million years ago by the same forces that created the Rocky Mountains.

Sedimentary rocks make up the majority of the terrain around Devils Tower. The oldest rocks in Devils Tower National Monument were laid down in a shallow sea between 225 and 195 million years ago, during the mid-to-late-Triassic period. Along the Belle Fourche River, visitors can see dark red sandstone and maroon siltstone interbedded with shale. The redness of the rocks is caused by the oxidation of iron minerals. The Spearfish Formation is the name given to this rock layer. The Tower’s views today are as diverse as its faces. These viewpoints are influenced by the National Park Service, American Indians, rock climbers, local people, and tourists from all over the world.

As water evaporated, gypsum deposits emerged. Dinosaurs, clams, and other small creatures have all left their imprints. The Gypsum Springs Formation is a thin band of white gypsum that lies above the Spearfish Formation. This gypsum layer was formed between 195 and 136 million years ago, during the Jurassic period. The spectacular cliffs of red and yellow siltstone and sandstone, interbedded with gray shale or limestone and white gypsum, have resulted in a multi-colored landscape dominated by rolling fields and dark green forests. Gray-green shales (deposited in low-oxygen environments like marshes) were interbedded with fine-grained sandstones, limestones, and sometimes thin beds of red mudstone as sea levels and climates shifted.

While geologists agree that Devils Tower was formed by magma intrusion (forcible entry of magma into or between other rock formations), there is some debate on how this process occurred. The Rocky Mountains and the Black Hills were uplifted 56 to 66 million years ago during the Paleocene Epoch. Magma rose through the crust, intruding through the sedimentary rock layers that already existed. The best way to see these other geologic formations is to hike the Red Beds and Joyner Ridge Trails. The park is named after the Spearfish Formation, which contains the park’s oldest visible rocks.

Devils Tower was hypothesized to be an eroded fragment of a laccolith by geologists Nelson Horatio Darton and C. C. O’Harra (of the South Dakota School of Mines) in 1907. Modern geologists accept that it was formed by igneous material intrusion, but disagree about how that phase occurred. Devils Tower may also be a volcanic plug or the neck of an extinct volcano, according to other hypotheses. In either case, erosion played a role in revealing this massive mass of rock, which has since become a significant historical and spiritual landmark.

For millions of years, Devils Tower was hidden. The igneous intrusion was only revealed as the surrounding landscape was steadily eroded by water and wind. The igneous material that makes up the Tower is a phonolite porphyry, a light to dark gray or greenish-gray igneous rock with prominent white feldspar crystals that was intruded around 40.5 million years ago. Devils Tower is revered by many Plains tribes as a holy site and a source of legends. They each have different names for the monolith, including Tree Rock (Kiowa), Bear’s Lodge (Cheyenne, Lakota), and Bear’s Tipi (Arapaho, Cheyenne).

The evidence of the changes the Tower has experienced during its geologic past can be seen at the foundation. A 13-acre field is formed by massive rocks, some as wide as a truck. This area of giant rocks was formed as parts of the Tower weathered off and eroded away, mostly around the west and south faces of the Tower. Several other Native American stories about Devils Tower have been passed down through the generations. The overlying sedimentary rocks eroded away, allowing Devils Tower to emerge from the landscape. The more resistant igneous rock that makes up the tower resisted the erosional forces that wore down the softer sandstones and shales. As a result, Devils Tower’s gray columns started to rise above the landscape as an isolated mass.

At Devils Tower National Monument, there are several hiking trails. Rain, hail, and lightning all cause the Tower to deteriorate over time. Erosion does the job of shifting the massive boulders until the rocks have broken off, or weathered, from the Tower. The predominant force at work is gravity, which pulls loose rock down. They can shatter again if they collide with something or roll, and parts of the Tower can now be found over a quarter mile away from the formation. Many wildlife species, including white-tailed deer, prairie dogs, and bald eagles, are protected by Devils Tower National Monument.

Wind, precipitation, and the nearby Belle Fourche River continue to erode the landscape today. Devil’s Tower, on the other hand, is eroding as well. Scree debris, boulders, and pieces of columns that have fallen off the tower litter the formation’s foundation. Except on December 25 and January 1, Devils Tower National Monument is open 24 hours a day, seven days a week. A seven-day pass costs $10 per vehicle ($5 for bikes, motorcycles, and pedestrians).