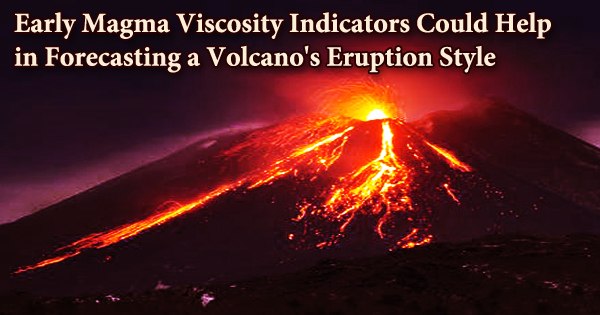 The 2018 eruption of Hawai’i’s Kīlauea Volcano provides scientists with a once-in-a-lifetime chance to discover new factors that might assist predict the danger potential of future eruptions. The characteristics of magma inside a volcano have an impact on how an eruption unfolds.

The viscosity of this molten rock, in particular, is a key element in determining how dangerous an eruption may be for neighboring people. Because more viscous magmas can stop gas from leaving through vents, letting pressure to build up inside the volcano’s plumbing system, they are related to more violent explosions. Extrusion of more viscous magma, on the other hand, leads in slower-moving lava flows.

“But magma viscosity is usually only quantified well after an eruption, not in advance,” explained Carnegie’s Diana Roman. “So, we are always trying to identify early indications of magma viscosity that could help forecast a volcano’s eruption style.”

She spearheaded new research towards discovering a magma viscosity indicator that may be monitored before to an eruption. This might aid scientists and emergency responders in deciphering future eruption trends. Nature has published the findings.

The 2018 eruptive activity was the first in Klauea’s lower East Rift Zone since 1960. Early in May, the first of 24 fissures opened, and the eruption lasted precisely three months. Many researchers, including Roman and her colleagues Arianna Soldati and Don Dingwell of Ludwig-Maximilians-Universität München, Bruce Houghton of the University of Hawai’i at Manoa, and Brian Shiro of the US Geological Survey’s Hawaiian Volcano Observatory, were given unprecedented access to information as a result of this situation.

The eruption produced a plethora of data on the behavior of both high and low-viscosity magmas, as well as pre-eruption tensions in the solid rock underneath Kīlauea.

Faults occur in the rock that makes up the Earth’s crust as a result of tectonic and volcanic action. Geoscientists use seismic equipment to measure the 3-D orientation and movement of these faults when geologic forces cause them to move against one other.

Roman and her colleagues discovered that the direction of fault movements in the lower East Rift Zone before and during the volcanic eruption may be utilized to predict the viscosity of rising magma during precursory unrest by examining what happened in Klauea’s lower East Rift Zone in 2018.

“We were able to show that with robust monitoring we can relate pressure and stress in a volcano’s plumbing system to the underground movement of more viscous magma,” Roman explained. “This will allow monitoring specialists to better predict how volcanoes like Kīlauea would erupt and adjust reaction measures ahead of time.”