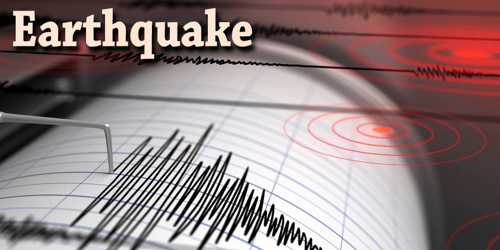 Earthquake is a sudden movement of the Earth’s lithosphere (its crust and upper mantle). Earthquakes are caused by the release of built-up stress within rocks along geologic faults or by the movement of magma in volcanic areas. They are usually followed by aftershocks. It is also known as a quake, tremor or temblor. At the Earth’s surface, earthquakes may manifest themselves by a shaking or displacement of the ground. Sometimes, they cause tsunamis, which may lead to loss of life and destruction of property. An earthquake is caused by tectonic plates getting stuck and putting a strain on the ground. The strain becomes so great that rocks give way by breaking and sliding along fault planes.

The word earthquake is used to describe any seismic event whether natural or caused by humans that generate seismic waves. Earthquakes are caused mostly by rupture of geological faults, but also by other events such as volcanic activity, landslides, mine blasts, and nuclear tests. An earthquake’s point of initial rupture is called its focus or hypocenter. The epicenter is the point at ground level directly above the hypocenter. Occurrences and Classifications of Earthquake

Earthquakes may occur naturally or as a result of human activities. Smaller earthquakes can also be caused by volcanic activity, landslides, mine blasts, and nuclear experiments. Most naturally occurring earthquakes are related to the tectonic nature of the Earth. Most of the earthquake’s energy is used to power the earthquake fracture growth and is converted into heat, or is released to friction. The majority of tectonic earthquakes originate at depths not exceeding tens of kilometers. Earthquakes may also occur in volcanic regions and are caused there both by tectonic faults and by the movement of magma in volcanoes. Such earthquakes can be an early warning of volcanic eruptions. Most of the world’s earthquakes (90%, and 81% of the largest) take place in the 40,000 km long, horseshoe-shaped zone called the circum-Pacific seismic belt, known as the Pacific Ring of Fire, which for the most part bounds the Pacific Plate. Massive earthquakes tend to occur along other plate boundaries, too, such as along the Himalayan Mountains. With the rapid growth of mega-cities such as Mexico City, Tokyo and Tehran, in areas of high seismic risk, some seismologists are warning that a single quake may claim the lives of up to 3 million people.

The strength of the earthquakes is changing according to its distance.  In   XİX century there were attempts to classify earthquakes according to their damages to our lives, geological environment and etc.

In 1902 in Italy by the Juzeppe Merkali has been adopted the scale of 12 points. In 1931 the American scientists Q.Vud. And F. Nyumen and in 1956 the Richter has made a few changes in that scale. And now this scale is called modified Merkalli and Richter scale (MMI). From the 1964 in Europe and in Ex Soviet Union where Azerbaijan was one of the members has been accepted the 12 unit European MSK Scale.

The following 12 points seismic intensity scale is given above. A recently proposed theory suggests that some earthquakes may occur in a sort of earthquake storm, where one earthquake will trigger a series of earthquakes each triggered by the previous shifts on the fault lines, similar to aftershocks, but occurring years later, and with some of the later earthquakes as damaging as the early ones.