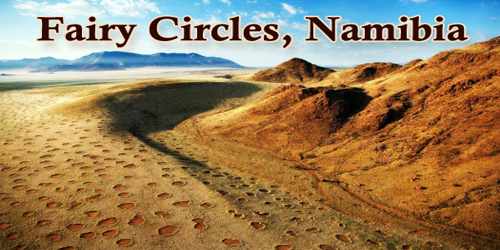 “Fairy Circles” (arid grass formation) are circular patches of land barren of plants, varying between 2 and 15 meters (7 and 49 ft) in diameter, often encircled by a ring of stimulated growth of grass. A defining feature of the majestic ‘Namib Desert,’ Namibia these dusty patches of earth, ringed with tall grass and dispersed evenly across 1,100 miles have eluded explanation and confounded scientists. Until 2014, the phenomenon was only known to occur in the arid grasslands of the Namib Desert in western parts of Southern Africa, being particularly common in Namibia. In that year, ecologists were alerted to similar rings of vegetation outside of Africa, in a part of the Pilbara in Western Australia.

Like the Bermuda Triangle, or until recently the sailing stones of Death Valley, speculation has been rife. Explanations for the circles, which can be from 10 to 65 feet across, have ranged from alien invasion to poisonous gasses. A paper from 2001 says people have claimed they’re the impact sites of meteorites, rolling spots for zebra or even localized radioactivity. 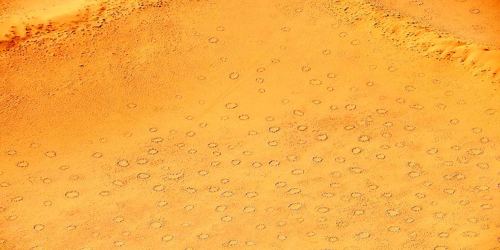 Fairy Circles typically occur in essentially monospecific grassy vegetation, where conditions are particularly arid. Associated grasses commonly are species in the genus Stipagrostis. Studies show that these circles pass through a life cycle of some 30 to 60 years. They become noticeable at a diameter of about 2 meters (6 ft 7 in), achieving a peak diameter of perhaps 12 meters (39 ft), after which they mature and “die” as they undergo invasion, mainly by grasses. Originally, it was believed that these strange bald spots only occur in Namibia’s ancient the Namib Desert; however, in 2014, fairy circles were discovered in yet another desert environment in Western Australia.

No one knows, with absolute scientific certainty, why these cookie-cutter patterns exist in just two of the world’s deserts and nowhere else on earth. Scientists, ecologists, entomologists, botanists, travelers, and local cultures alike each have their own theories, many of them laughable, and the strange puzzle continues to baffle and bewilder onlookers from around the world. Australian environmental engineer, Bronwyn Bell alongside Dr. Stephan Getzin from the Helmholtz Centre for Environmental Research released a paper in 2016 providing new insight into a possible cause of the fairy circle formations.

In Africa, the circles occur in a band lying about 100 miles (160 km) inland and extending southward from Angola for some 1,500 miles (2,400 km) down to the Northwestern Cape province of South Africa. It is largely a remote and inhospitable region, much of it over a hundred miles from the nearest village. The circles have been recognized and informally remarked on for many years, first being mentioned in technical literature in the 1920s and intermittently thereafter with the intensity of study increasing during the final quarter of the 20th century.

Biologist Walter Tschinkel of Florida State University concluded in 2012 that the circles had an average lifespan of 41 years, based on his analysis of satellite images over many decades. He thought termites were the most likely explanation but found no evidence to support his hypothesis. The following year, ecologist Norbert Juergens of the University of Hamburg reported evidence of an especially clandestine nocturnal species of sand termite (Psammmotermes allocerus) that could be the culprits, based on his sampling of around 1,200 fairy circles from his many trips to Africa.

Unresolved questions remain about the soil from the center of the circle inhibiting plant growth and the interactions of other species in the fairy circle as they relate to the local ecosystem. Furthermore, the received wisdom from about a century ago remarked on the “heuweltjies” being anomalously rich in plant nutrients, raising the question of how many effectively different types or circumstances of circles or heuweltjies there might be.

There are two far more probable and realistic explanations for these puzzling desert formations. One school of thought insists that the ominous circles are most likely the result of neighboring armies of underground termite colonies duking it out regularly for territory and nutrients. The other school claims that the fairy rings are caused by desert vegetation competing for scarce water and nutrients in the soil. A meeting of the minds, recent scientific research actually suggests that it is a combination of both duelling termite colonies and competing for vegetation.

In the oral myths of the Himba people, these barren patches are said to have been caused by the gods, spirits and/or natural divinities. The region’s bushmen have traditionally ascribed spiritual and magical powers to them. Of specific beliefs, the Himba people note that their original ancestor, Mukuru was responsible for the creation of the fairy circles, or that they were the footprints of gods. Another myth put forth, promoted by some tour guides, is that the circles are formed by a dragon in the earth and that its poisonous breath kills the vegetation. The Himba people use fairy circles in their agriculture. Because fairy circles support grasses in otherwise barren land, they provide grazing. Sometimes they erect temporary wooden fences around the circles to corral young cattle for overnight protection against predators.