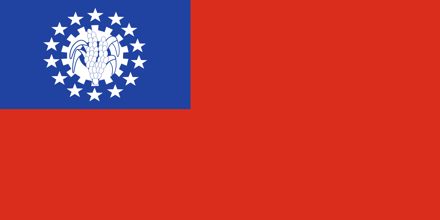 The current flag of Myanmar was adopted on 21 October 2010 to replace the former flag in use since 1974. The Blue represents peace and endurance. The red symbolizes courage and gallantry, and the white stands for purity and honor. Together, the cogwheel and ears of rice represent the country’s industry and agriculture, as well as the union of the workers and the peasant class. The 14 stars above the 14 cogs represent the 14 states that form the Union of Myanmar. The new flag was introduced along with implementing changes to the country’s name, which were laid out in the 2008 Constitution.