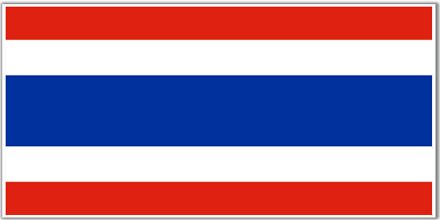 The flag of the Kingdom of Thailand shows five horizontal stripes in the colours. The red stripes represent the blood spilt to maintain Thailand’s independence. The white stands for purity and is the color of Buddhism which is the country’s main religion. Blue is Thailand’s national color and it represents the Thai monarchy. The blue is also used to honor Thailand’s World War I allies, Great Britain, France, United States and Russia, who all had red, white and blue flags.