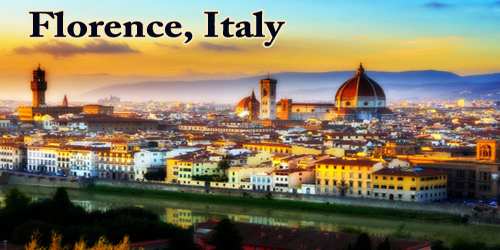 Florence (/ˈflɔːrəns/ FLORR-ənss; Italian: Firenze (fiˈrɛntse)), Latin Florentia, city, capital of Firenze Provincia (province) and Toscana (Tuscany) regione (region), central Italy. It is the most populated city in Tuscany, with 383,084 inhabitants in 2013, and over 1,520,000 in its metropolitan area. The city center is best experienced on foot as it’s small, made of narrow, winding alleys and reeks of history and grandeur around every corner. The city, located about 145 miles (230 km) northwest of Rome, is surrounded by gently rolling hills that are covered with villas and farms, vineyards, and orchards.

Florence was founded as a Roman military colony about the 1st century BCE, and during its long history, it has been a republic, a seat of the duchy of Tuscany, and a capital (1865–70) of Italy. During the 14th–16th century Florence achieved preeminence in commerce and finance, learning, and especially the arts.

Art lovers will be inevitably exposed to countless episodes of Stendhal Syndrome (quite tellingly, also known as Florence Syndrome) at the Uffizi Gallery, a huge museum, one of the world’s oldest, displaying the masterpieces of artists such as Leonardo Da Vinci, Sandro Botticelli, Raphael, Caravaggio, and Cimabue, just to name a few, or when wandering the halls and corridors of 15th-Century Palazzo Pitti, a complex of museums and royal residences. 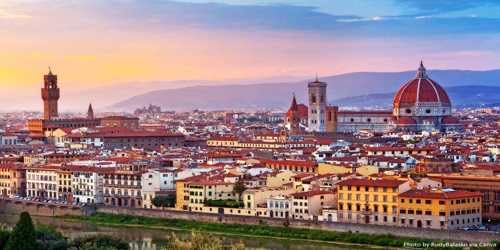 The city attracts millions of tourists each year, and UNESCO declared the Historic Centre of Florence a World Heritage Site in 1982. The city is noted for its culture, Renaissance art and architecture, and monuments. The city also contains numerous museums and art galleries, such as the Uffizi Gallery and the Palazzo Pitti, and still exerts an influence in the fields of art, culture, and politics. Due to Florence’s artistic and architectural heritage, Forbes has ranked it as one of the most beautiful cities in the world.

Florence plays an important role in Italian fashion, and is ranked in the top 15 fashion capitals of the world by Global Language Monitor; furthermore, it is a major national economic center, as well as a tourist and industrial hub. In 2008 the city had the 17th-highest average income in Italy.

With a glorious past marked by the influence of the Medici family, with Lorenzo Il Magnifico standing out as “the needle on the Italian scales” at a time when the different powers in Italy were struggling to dominate, history buffs will be spoilt for choice. The 13th-century Palazzo Vecchio, formerly Palazzo della Signoria, towering over its namesake piazza, built on the site of an ancient Roman theater. The complex of Santa Maria del Fiore in Piazza del Duomo, visiting the Cathedral, climbing Giotto’s bell tower, admiring the mosaics of St. John’s Baptistery and staring at the Brunelleschi Cupola from inside with the frescoes of Vasari and Zuccari and outside to take a great postcard picture of the rooftops are also experiences that need to make it on visitors or travelers Florence itinerary.

Florence originated as a Roman city, and later, after a long period as a flourishing trading and banking medieval commune, it was the birthplace of the Italian Renaissance. According to the Encyclopædia Britannica, it was politically, economically, and culturally one of the most important cities in Europe and the world from the 14th to 16th centuries. The language spoken in the city during the 14th century came to be accepted as the model for what would become the Italian language. Thanks especially to the works of the Tuscans Dante, Petrarch, and Boccaccio, Florentine dialect, above all the local dialects, was adopted as the basis for a national literary language.

Florence was occupied by the German army in the latter stages of World War II. Antifascist resistance was very strong in the city and in the Tuscan region, and fighting was heavy. On leaving Florence, the Germans blew up all the bridges across the Arno but spared the famous Ponte Vecchio. After the war, debates again arose regarding the reconstruction of the city. The 1950s saw Florence expand into its periphery, and in 1962 a plan was developed partly to guide expansion away from the Florence-Prato conurbation. Despite certain innovative qualities, the plan failed, and the two cities are now all but one, constituting one big urban sprawl. The population of Florence reached more than 400,000 in the 1980s but soon fell slightly below that level.

Florence has a humid subtropical climate (Cfa), tending to Mediterranean (Csa). It has hot summers with moderate or light rainfall and cool, damp winters. As Florence lacks a prevailing wind, summer temperatures are higher than along the coast. The average monthly temperature for July and August is about 73 to 75 °F (23 to 24 °C), with an average daytime high of about 95 °F (35 °C); the average monthly temperature for January is 41 °F (5 °C). Rainfall in summer is convectional, while relief rainfall dominates in the winter. Snow flurries happen almost every year, but often result in no accumulation.

Italy’s fashion industry was born and bred here. Homegrown designers Guccio Gucci and Salvatore Ferragamo opened haute-couture boutiques in Florence in the 1920s and shopping in the Tuscan capital have been stylish ever since. A-lister fashion houses lace Via de’ Tornabuoni and a Pandora’s box of specialist boutiques selling all manner of beautiful objects parade alongside family-run botteghe (workshops) in a glorious tangle of medieval backstreets. Watch fourth-generation Florentine goldsmiths and shoemakers at work, buy artisan scents evocative of the Florentine countryside and Tuscan sea breeze, and know the tag ‘Fiorentina’ is one of the finest international labels going.

Florence was founded to control the only practicable north-south crossing of the Arno River to and from the three passes through the Apennines: one to Faenza and two to Bologna. Two thin streams, the Mugnone and the Affrico, come down through town to meet the Arno. The Affrico, not far away from its source in the Apennines, is usually a grudging gurgle amid wide gravel beds far below the quays, but sometimes it rises and swells into a powerful stream, ravaging the city with floods. The city’s water supply has also served as an asset, however, making possible the washing, fulling, and dyeing of cloth, resulting in the development of a major industry.

Florence is known as the “cradle of the Renaissance” (la culla del Rinascimento) for its monuments, churches, and buildings. The best-known site of Florence is the domed cathedral of the city, Santa Maria del Fiore, known as The Duomo, whose dome was built by Filippo Brunelleschi. The nearby Campanile (partly designed by Giotto) and the Baptistery buildings are also highlights. The dome, 600 years after its completion, is still the largest dome built in brick and mortar in the world. In 1982, the historic center of Florence (Italian: centro storico di Firenze) was declared a World Heritage Site by the UNESCO. The center of the city is contained in medieval walls that were built in the 14th century to defend the city. At the heart of the city, in Piazza della Signoria, is Bartolomeo Ammannati’s Fountain of Neptune (1563–1565), which is a masterpiece of marble sculpture at the terminus of a still-functioning Roman aqueduct.

Beyond the historic center of Florence, the city has expanded over the past century to accommodate waves of migration. Vast housing projects have been constructed, such as those at Isolotto (1954–55). These peripheral zones have actually grown to dominate the city center, creating a kind of “open urban system” and a vast and successful industrial district that stretches northwest to Prato and southeast as far as Arezzo. Huge satellite towns such as Scandicci have grown to rival the center of Florence itself.

Stand on a bridge over the Arno several times in a day and the light and mood changes every time. At sunset hike to Piazzale Michelangelo to be dazzled by a palette embracing every known shade of soft pink, orange, and fiery amber. Surprisingly small as it is, Florence looms large on the world’s ‘must-sees’ list and not just for its unmatched treasure chest of art. Rich in culture, backdropped by history and anchored by family, faith, and food, the Florentine lifestyle is enviably sweet. Enjoy a go-slow afternoon passeggiata, indulge in an aperitivo at dusk, savor la dolce vita. 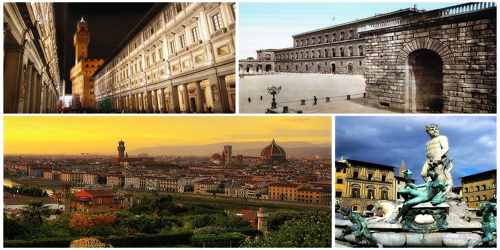 Tourism is, by far, the most important of all industries, and most of the Florentine economy relies on the money generated by international arrivals and students studying in the city. The value tourism to the city totaled some €2.5 billion in 2015 and the number of visitors had increased by 5.5% from the previous year. In 2013, Florence was listed as the second-best world city by Condé Nast Traveler.

Manufacturing and commerce, however, still remain highly important. Florence is also Italy’s 17th richest city in terms of average workers’ earnings, with the figure being €23,265 (the overall city’s income is €6,531,204,473), coming after Mantua, yet surpassing Bolzano.

Florence has always boasted an intellectual elite rivaling that of any city in Italy. In the late 19th and early 20th centuries, historians Pasquale Villari and Gaetano Salvemini taught at the University of Florence. Salvemini was later forced out of Italy altogether by fascist violence. Fascism’s most important intellectual and theorist, Giovanni Gentile, was based in Florence and was killed there by communist partisans during World War II. After the war, intellectuals of the calibre of legal scholar Piero Calamandrei, literary historian Gianfranco Contini, and communist social historian Ernesto Ragionieri all worked in the city, as did novelists such as Vasco Pratolini. The cosmopolitan nature of the city has always produced a cultural milieu different from those of other, more closed Italian cities. The various research institutes and faculties attached to the University of Florence are among the most important in Italy.