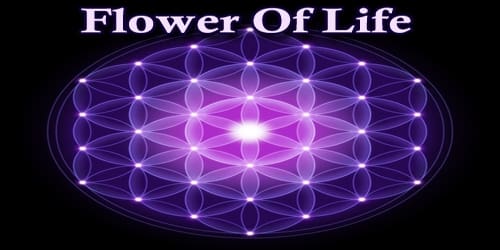 The ‘Flower of Life’ is a name for a geometrical figure composed of seven or more evenly-spaced, overlapping circles. The pattern formed by the circles creates images of perfectly symmetrical flowers. Some ‘Flower of Life’ symbols uses as little as seven circles within the design so there are some different variations of the symbol.  This figure, used as a decorative motif since ancient times, forms a flower-like pattern with the symmetrical structure of a hexagon. The center of each circle falls on the circumference of the six adjoining and encircling circles of the same diameter. Some opine that it depicts fundamental form of space and time. It also has a definite ancient and spiritual value. 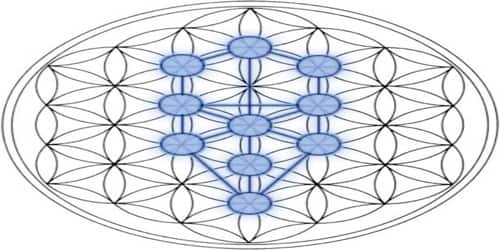 Tree of Life symbol in the “Flower of Life”

The meaning behind the ‘Flower of Life’ symbol is that it is believed to represent the cycle of creation. It depicts how all life comes from one singular source represented by the circle in the middle of the pattern. A number of sanctified beliefs are linked with the ‘Flower of Life’; Illustrations of the five Platonic Solids are originated inside the symbol of Metatron’s Cube, most probably which are derived from the ‘Flower of Life’ pattern. These platonic solids are geometrical depictions and also act as a template from which all life springs.

Commonly, designs are based on circles centered on triangles (with the simple, two circle form named vesica piscis) or on the square lattice pattern of points. Patterns of seven overlapping circles appear in historical art effects from the 7th century BC onwards; they become a frequently used ornament in the Roman Empire period and survive into medieval artistic traditions both in Islamic art (girih decorations) and in Gothic art. The name “Flower of Life” is given to the overlapping circle’s pattern in New Age publications.

Symbols that resemble the ‘Flower of Life’ can be found in temples, churches, secular buildings, burial sites, art objects, and manuscripts worldwide. Many cultures used this symbol in full knowledge of its power and potency.

In Egypt, for example, the ‘Flower of Life’ is engraved in some parts of the Pyramids. The relevance of this symbol for the ancient Egyptians can also be found in their temples. Some of the temple complexes were constructed with utter preciseness and harmony. Theoretically, this type of preciseness couldn’t have been possible at that time.

The ‘Flower of Life’ has a secret symbol which was created by drawing 13 circles. Because of this, the most significant and hallowed outline in the universe can be discovered. This striking picture is also called the ‘Fruit of Life’. 13 informational systems are there. An aspect of reality is depicted and explained by each one of these. Thus these systems offer access to everything starting from the human body to the galaxies.

The perfect form, proportion, and harmony of the ‘Flower of Life’, also known as ‘Life’s Flower’, has been known to philosophers, architects, and artists around the world since ancient times. Pagans consider it to be sacred geometry containing ancient religious value depicting the fundamental forms of space and time. For many, this symbol is a visual representation of the interconnectedness of life. There is believed to be a secret symbol hidden within the ‘Flower of Life’ symbol, which is said to hold the most significant and sacred patterns of the universe. It is believed to be a sort of blueprint for all life, with the fundamental patterns for everything from atoms to planets and everything in between. 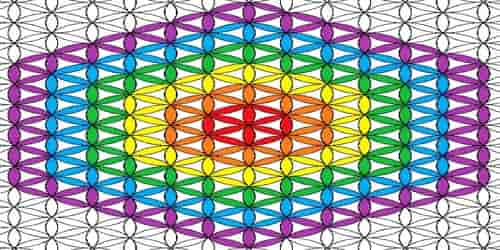 One interesting feature of the ‘Flower of Life’ is that evidence of its importance can be found in almost every major culture around the world. It can be seen, for example, in temples within the Forbidden City of China , in ancient synagogues in Israel , in the Buddhist temples of India and Japan, in the City of Ephesus in Turkey, carved into rock in Assyria, in Italian art from the 13th century, and in Cordoba, in ‘la Mezquita’ in Spain. The oldest known examples of the Flower of Life are believed to be those present in the Temple of Osiris in Abydos, Egypt.