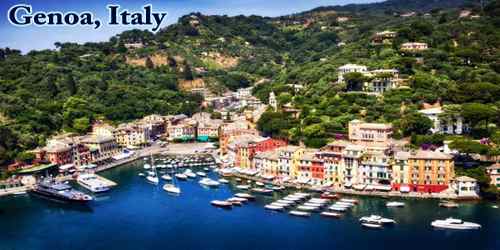 Genoa (/ˈdʒɛnoʊə/ JEN-oh-ə; Italian: Genova (ˈdʒɛːnova); Ligurian: Zêna (ˈzeːna); English, historically, and Latin: Genua) city and Mediterranean seaport in northwestern Italy. It is the capital of Genova provincia and of Liguria region and is the center of the Italian Riviera. Its total area is 93 square miles (240 square km).  It is a city that is often overlooked in the north of Italy because of the appeal of other cities such as Milan and Turin, or prettier coastal towns.

In 2015, 594,733 people lived within the city’s administrative limits. As of the 2011 Italian census, the Province of Genoa, which in 2015 became the Metropolitan City of Genoa, counted 855,834 resident persons. Over 1.5 million people live in the wider metropolitan area stretching along the Italian Riviera.

Genoa lies on the Ligurian coast in the northwest of Italy and is the capital of the region. Being on the coast, it has been an important center for maritime history and a walk along the harbor will remind visitors of that. Many boats line the waterfront and if they like history and want to learn about the area, they can’t miss the Museo del Mare that’s also there.

Genoa has been nicknamed la Superba (“the proud one”) due to its glorious past and impressive landmarks. Part of the old town of Genoa was inscribed on the World Heritage List (UNESCO) in 2006 as Genoa: Le Strade Nuove and the system of the Palazzi dei Rolli. The city’s rich cultural history in art, music, and cuisine allowed it to become the 2004 European Capital of Culture. It is the birthplace of Guglielmo Embriaco, Christopher Columbus, Andrea Doria, Niccolò Paganini, Giuseppe Mazzini, Renzo Piano and Grimaldo Canella, founder of the House of Grimaldi, among others.

Genoa’s local airport, Aeroporto Cristoforo Colombo, or the Christopher Columbus Airport is just 6km from the city center and offers regular bus services to Old Town or the main city train station, Piazza Verdi. Genoa is best explored on foot, particularly in the older parts of Poto Antico, however, there are also local bus services that run throughout the city. Tickets must be pre-purchased from local newsstands or tobacco shops. Taxis are also readily available and visitors are advised to book these through their accommodation.

The city of Genoa covers an area of 243 square kilometers (94 sq mi) between the Ligurian Sea and the Apennine Mountains. The city stretches along the coast for about 30 kilometers (19 mi) from the neighborhood of Voltri to Nervi, and for 10 kilometers (6.2 mi) from the coast to the north along the valleys Polcevera and Bisagno. The territory of Genoa is popularly divided into 5 main zones: the center, the west, the east, the Polcevera, and the Bisagno Valley. Genoa is adjacent to two popular Ligurian vacation spots: Camogli and Portofino. In the metropolitan area of Genoa lies Aveto Natural Regional Park. 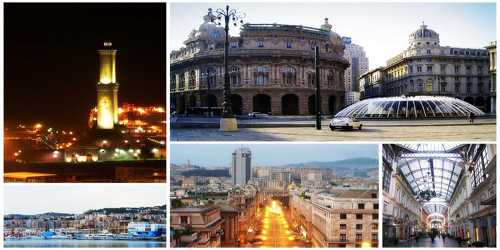 Shipbuilding is the major industry; other industries produce petroleum, textiles, iron and steel, locomotives, paper, sugar, cement, chemicals, fertilizers, and electrical, railway, and marine equipment. Genoa also is a major center for finance and commerce. The port of Genoa leads all other Italian ports in the volume of passengers and freight traffic and is the main source of city income. It handles imports chiefly of coal, crude oil, and grain and exports mainly of cotton and silk textiles, olive oil, and wine.

Genoa was the birthplace of Christopher Columbus (1451), who embodied the active maritime tradition of the city. It is noted for its many examples of medieval, Renaissance, Baroque, and Gothic architecture. The Ducal Palace, San Lorenzo Cathedral, Church of San Matteo, and Palazzo San Giorgio are some of the most important historical monuments. The Palazzo Bianco and the Palazzo Rosso are the two largest picture galleries; Edoardo Chiossone Museum of Oriental Art and the Cathedral Treasury have extensive medieval collections. The Strade Nuove (now Via Garibaldi) and the Palazzi dei Rolli, the first European examples of an urban development project with a unitary framework, were designated a UNESCO World Heritage site in 2006. The University of Genoa (founded 1471) is an important center of higher learning in northern Italy. The city also has several commercial colleges and a school of navigation.

During the 12th and 13th centuries, Genoa played a leading role in the commercial revolution that Europe was undergoing. It became a town of about 100,000 inhabitants, a naval power dealing on equal terms with the greatest monarchies, and a commercial center rivaled only by Venice in the Levant trade and competing with other Italian towns in trade with western Europe. Eastern spices, dyestuffs and medicaments, western cloth and metals, African wool, skins, coral, and gold were the main articles of a very diversified international commerce. Banking and shipbuilding flourished, and the local textile industry made a good start. At the same time, the Genoese brought all of Liguria, most of Corsica, and northern Sardinia under their direct or indirect control and founded self-governing commercial colonies all around the Mediterranean coast. Many of these colonies were the result of Genoese participation in the Crusades and of shorter campaigns by the Genoese alone in Spain, Africa, and the Levant, but some were set up by peaceful penetration and diplomatic bargaining. They ranged in size from individual buildings to walled suburbs of towns and, eventually, entire islands or districts of coastal land.

Genoa was a powerful port and briefly entered in conflict with Venice over the Mediterranean Trade. Genoa always struggled to rule itself, with many inner conflicts among the nobility weakening the Republic. This inability to rule itself caused Genoa to put themselves twice under French rule, once in 1391 then in 1458. The Black Death in 1348 hit Genoa hard and contributed to its decline. Genoa also owned the island of Corsica but sold it to France in 1768 due to financial struggles. It was 1796 that the Republic of Genoa finally ended, replaced by the French ruled the Ligurian Republic. Since 1815 after the “Congresso di Vienna” Genoa joined the Regno di Sardegna (Sardinia Kingdom). Italian unification of 1861 resulted in Genoa becoming the maritime hub of the new Italian state. Genoese establishment of trade routes along the Mediterranean brought wealth and political power to the city. The fleet’s participation in the Crusades allowed Genoa to further establish prosperous trading colonies in the Holy Land. The Genoese trading station of Caffa in Crimea brought the Black Death to Europe, through infected rats on ships fleeing siege in 1346.

Located in the heart of Old Town, the Palazzo Ducale is one of Genoa’s most popular attractions and was home to a number of dodge rulers. Home to St John the Baptist’s Renaissance chapel, Cattedrale di San Lorenzo is located just west of Piazza Matteotti. Nearby, the Palazzo Reale is a lavish place home to a grand ballroom, Turkish carpets, and silk curtains as well as amazing artwork including Van Dyck’s famous ‘Crucifixion’. The street of Via Garibaldi is a narrow road overflowing with Renaissance art as well as spacious private courtyards and sculptured facades. The street also features the finest art gallery in Genoa, the Galleria di Palazzo Bianco. The culture center of Porto Antico is also home to a number of exhibition halls that have been converted from old warehouses as well as a number of seafront restaurants and cafes offering picturesque views of the marina.

The city of Genoa during its long history at least since the 9th century had been protected by different lines of defensive walls. Large portions of these walls remain today, and Genoa has more and longer walls than any other city in Italy. The main city walls are known as “Ninth century walls”, “Barbarossa Walls” (12th century), “Fourteenth-century walls”, “Sixteenth-century walls” and “New Walls” (“Mura Nuove” in Italian). The more imposing walls, built in the first half of the 17th century on the ridge of hills around the city, have a length of almost 20 km (12 mi). Some fortresses stand along the perimeter of the “New Walls” or close them. 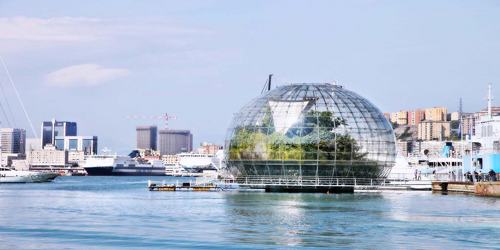 Genoa is home to a number of annual events, the most unusual of which is the Festival of Clowns held in December. Genoa is home to the largest marine park in Europe in the form of its Aquarium.