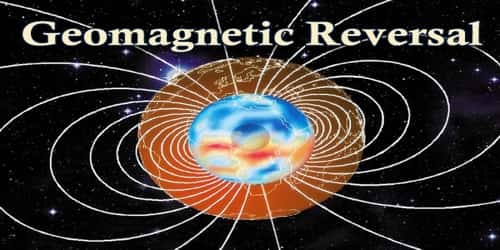 A ‘Geomagnetic reversal’ or a magnetic ‘flip’ of the Earth is when the orientation of the Earth’s magnetic field becomes reversed. It is a change in a planet’s magnetic field such that the positions of magnetic north and magnetic south are interchanged (not to be confused with geographic north and geographic south). The Earth’s field has alternated between periods of normal polarity, in which the predominant direction of the field was the same as the present direction, and reverse polarity, in which it was the opposite. These periods are called ‘chrons’.

By magnetic reversal, or ‘flip’, we mean the process by which the North Pole is transformed into a South Pole and the South Pole becomes a North Pole. Interestingly, the magnetic field may sometimes only undergo an ‘excursion’, rather than a reversal. Here, it suffers a large decrease in its overall strength, that is, the force that moves the compass needle. During an excursion the field does not reverse, but later regenerates itself with the same polarity, that is, North remains North and South remains South.

The process (Geomagnetic Reversal) is a gradual one though that can take thousands of years. The possibility that the magnetic field could reverse was first brought up in the early 1900s. However, at this time scientists did not understand the Earth’s magnetic field very well, so they were not interested in the concept of geomagnetic reversal. It was not until the 1950s that scientists began a more in-depth study of geomagnetic reversal.

Reversal occurrences are statistically random. There have been 183 reversals over the last 83 million years. The latest, the Brunhes-Matuyama reversal, occurred 780,000 years ago during the Stone Age, and indeed there’s evidence to suggest the planet may be in the early stages of a pole reversal right now. Other sources estimate that the time that it takes for a reversal to complete is on average around 7000 years for the four most recent reversals. Clement (2004) suggests that this duration is dependent on latitude, with shorter durations at low latitudes, and longer durations at mid and high latitudes. Although variable, the duration of a full reversal is typically between 2000 and 12000 years, which is one to two orders of magnitude less than the duration of magnetic chrons.

The geologic record shows that hundreds of pole reversals have occurred throughout Earth’s history; they happen when patches of iron atoms in Earth’s liquid outer core become reverse-aligned, like tiny magnets oriented in the opposite direction from those around them. When the reversed patches grow to the point that they dominate the rest of the core, Earth’s overall magnetic field flips. During such an excursion, the field reverses in the liquid outer core, but not in the solid inner core. Diffusion in the liquid outer core is on timescales of 500 years or less, while that of the solid inner core is longer, around 3000 years.

Scientists have not reached a consensus on what causes pole reversal. Some believe that it is simply an effect of the nature of the planet’s magnetic field. They base this hypothesis on the magnetic field lines’ tendency to move around and think that it becomes agitated enough to flip. Other scientists propose that external influences cause the shift. For example, a tectonic plate that undergoes subduction and goes into the Earth’s mantle may disturb the magnetic field enough to make it turn off. When the field restarts, it randomly chooses an orientation, so it could shift.

Shortly after the first geomagnetic polarity time scales were produced, scientists began exploring the possibility that reversals could be linked to extinctions. Detailed calculations confirm that if the Earth’s dipole field disappeared entirely (leaving the quadrupole and higher components), most of the atmosphere would become accessible to high-energy particles, but would act as a barrier to them, and cosmic ray collisions would produce secondary radiation of beryllium-10 or chlorine-36. A 2012 German study of Greenland ice cores showed a peak of beryllium-10 during a brief, complete reversal 41,000 years ago, which led to the magnetic field strength dropping to an estimated 5% of normal during the reversal. There is evidence that this occurs both during secular variation and during reversals.

Since the magnetic field is weaker at first when it switches, some claim that the Earth will be ravaged by solar rays. Scientists still have not determined what effects a geomagnetic reversal will have on humans; however, humans did survive the last reversal 780,000 years ago. One hypothesis is that the solar winds actually create a magnetic field sufficient enough to protect us while Earth’s magnetic field restarts.

However, we have mathematical models of the Earth’s magnetic field for the last 400 years, with early models based largely on observations made by mariners engaged in merchant and naval shipping. From these models and extrapolating down into the Earth, it is known that regions of reversed flux at the core-mantle boundary have grown over time. In these regions the compass points in the opposite direction, in or out of the core, compared to that of surrounding areas. It is the growth in the area of such a reversed flux patch under the south Atlantic that is primarily responsible for the decay in the main dipolar field. This reverse patch is also responsible for the minimum in field strength called the South Atlantic Anomaly, now centered over South America. In this region energetic particles can approach Earth more closely, causing increased radiation risk to low Earth orbit satellites.