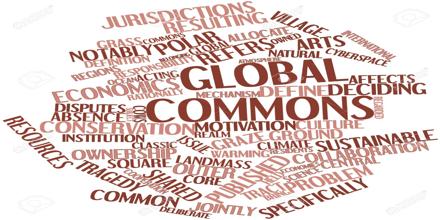 Global Commons is a derivation of the term Common. It is the earth’s unwonted natural resources, such as the oceans, the atmosphere and space. It is a term typically used to describe international, supranational, and global resource domains in which common-pool resources are found. It is typically used to indicate the earth’s shared natural resources, such as the deep oceans, the atmosphere, outer space and the Northern and Southern polar regions, the Antarctic in particular. It is the design of governance structures and management systems capable of addressing the complexity of multiple public and private interests, subject to often unpredictable changes, ranging from the local to the global level.