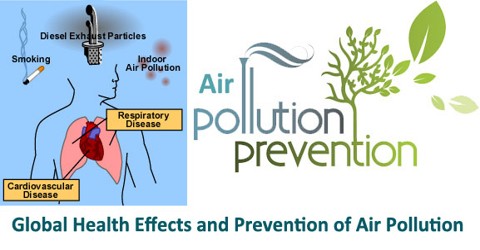 Air pollution is a chemical, physical or biological agent that alters the natural characteristics regarding the atmosphere. Air pollution is the world’s deadliest environmental problem. It kills 7 million people each year, or one in eight deaths globally. 4.3 million of these deaths are due to 2.8 billion people in the developing world who cook and keep warm inside their homes, by burning dung, firewood and coal – filling their living spaces with smoke and pollutants. The impact of air pollution on human health has been widely recognized. According to the World Health Organization (WHO)’s publication on Global Health Risk (2009), urban outdoor air pollution is ranked as the 14th global risk factor for mortality in Year 2004.

Nearly 6 million deaths were attributed to AAP and HAP in 2010.  This is more than from alcohol and drugs, about the same as from active and passive tobacco smoking and four times more than from child and maternal under-nutrition. Of 67 risk factors assessed, it is only surpassed by total dietary risk factors and high blood pressure, of which the latter is influenced by air pollution, tobacco smoking and diet.  In 2012, WHO updated the estimate to 7 million deaths, with AAP associated with 3.7 million and HAP from solid fuel use associated with 4.3 million.

Air pollution can harm us when it accumulates in the air in high enough concentrations. People exposed to high enough levels of certain air pollutants may experience:

In addition, long-term exposure to air pollution can cause cancer and damage to the immune, neurological, reproductive, and respiratory systems. In extreme cases, it can even cause death. Nearly 90% of the world’s population lived in areas with ambient outdoor PM2.5 concentrations exceeding WHO’s Air Quality Guideline of 10µg/m (annual average) in 2005; for many people, exposure is much higher. The highest average concentrations (weighted by population) were in a belt extending from western sub-Saharan Africa through the Middle East, South and East Asia and high income Asia Pacific countries. In South Asia, 99% of the population was exposed to PM2.5 at average concentrations above10µg/m, while the figure in Western Europe is 92%. Nearly one third of the global population was exposed to fine particulates at a concentration above 35µg/m3, the WHO’s Level 1 Interim Target. Most of the locations where this level was exceeded were in Asia.

Globally, about 15% of the urban population uses solid fuels while 67% of the rural population does so.

About 41% of the world’s population – 2.8 billion – used mainly solid fuels for cooking in 2010. As a proportion of the global population, this has declined, but the absolute number has increased slightly, to nearly 2.9 billion today, mostly in China, India and other Southern Asian countries, sub-Saharan Africa and South East Asia. For a community-wide improvement, the use of modern energy sources such as LPG is needed. The reduction in health effects for individual households may be of the order of 40-50%, but this can rise to over 65% if all households if the entire community stops using solid fuels.

However, some groups of people are especially sensitive to common air pollutants such as particulates and ground-level ozone. Sensitive populations include children, older adults, people who are active outdoors, and people with heart or lung diseases, such as asthma.

Prevention and Control of Air Pollution

To better understand air pollution prevention techniques, it is important to recognize the many different types that exist. This will help people to pinpoint the kind of action needed to tackle individual problems. A host of major sources of pollution have been identified with the greatest source of emissions surrounding our automobiles. An assortment of gases, such as carbon dioxide, which helps make the global warming problem worse, is also a newly recognized culprit for air pollution. Although pollution is unfortunately all around us, we all have a role to play when it comes to preventing pollution. The following list can help us to get started thinking about ways that we can prevent air pollution in our own life from day to day.

Support public policies and representative politicians who will work to protect the air and the environment.

Support companies that are committed to sustainable manufacturing practices and reducing pollution in the air.

Recycle and buy recycled products. It takes more energy and natural resources to make new things, increasing the environmental footprint including the air pollution that is produced of those products, compared with those products that are made from recycled materials. Some other methods of controlling Air Pollution:

Ventilation is also required to lessen the amount of indoor air pollution. When cleaning, baking soda may work just as well as harsher chemical cleaners. Gas appliances and heaters should undergo regular inspections and maintenance. The inside of the home should be kept clean on a regular basis in order to eradicate dust and mold accumulation.