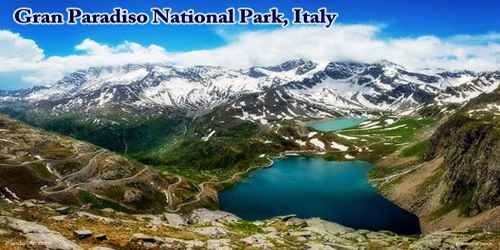 Gran Paradiso National Park (Italian: Parco nazionale del Gran Paradiso, French: Parc national du Grand Paradis), is to the south-west of the Valle dAosta region of north-west Italy. It was the first National Park to be established in Italy, in 1922 and based on a region deignated for the protection of ibex in 1856. This national park in the Graian Alps of Italy’s northwest was the first national park in the country and was created to protect the once-endangered Alpine ibex. This theme of conservation continues to this day with great efforts going into preserving the habitats of the park’s wildlife.

Not only is the park home to mountains like Gran Paradiso, Gran Paradiso National Park also features classic alpine scenery, from meadows to woodlands and glaciers. Still, the mountain of Gran Paradiso deserves some attention too since it’s the only mountain entirely within Italy that reaches 4,000 meters.

The park is named after Gran Paradiso mountain, which is located in the park, and is contiguous with the French Vanoise national park. The land the park encompasses was initially protected in order to protect the Alpine ibex from poachers, as it was a personal hunting ground for king Victor Emmanuel II, but now also protects other species.

Gran Paradiso National Park covers an area of ​​over 71 thousand hectares around the summit of Gran Paradiso, the only peak higher than 4,000 meters within Italian territory. The park is home to 168 species of fauna, 1,124 species of flora, 59 glaciers, and 183 lakes. The park is covered in nature with urban areas only representing 0.2% of the area of the park and only 300 people living within its territory. The park is surrounded by 13 municipalities with 8,160 residents rich in history and culture. 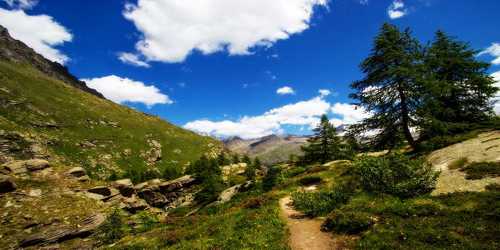 In the early 19th century, due to hunting, the Alpine ibex survived in the Gran Paradiso and Vanoise area. Approximately 60 individual ibex survived, here. Ibex were intensively hunted, partly for sport, but also because their body parts were thought to have therapeutic properties: talismans were made from a small cross-shaped bone near the ibex’s heart in order to protect against violent death. Due to the alarming decrease in the ibex population, Victor Emmanuel, soon to be King of Italy, declared the Royal Hunting Reserve of the Gran Paradiso in 1856. A protective guard was created for the ibex. Paths laid out for the ibex are still used today as part of 724 kilometers (450 mi) of marked trails and mule tracks.

In 1920 Victor Emmanuel II’s grandson King Victor Emmanuel III donated the park’s original 21 square kilometers (5,189 acres), and the park was established in 1922. It was Italy’s first national park. There were approximately 4,000 ibex in the park when it was protected. Despite the presence of the park, ibex were poached until 1945, when only 419 remained. Their protection increased, and there are now almost 4,000 in the park.

It is the wilderness and beauty of the Gran Paradiso National Park that is the main attraction – it contains a great deal of stunning mountain and valley scenery, interrupted by glaciers, flower-strewn meadows and crashing streams.

The variety of landscapes is also fascinating, with and agricultural land and woodlands (both coniferous and deciduous woodlands are found here) in the valleys giving way to alpine meadows, high mountains and numerous glaciers as visitors increase in altitude.

The Gran Paradiso offers many possibilities for visits, as there are 553 km of accessible trails mostly deriving from the network of ancient royal hunting roads. There are five valleys in which this wonderful and uncontaminated territory is divided into: Valle Soana, Valle Orco, Valle di Cogne, Valle di Rhêmes, and Valsavarenche.

Several short walks leave from Cogne, and guided walks that introduce the incredible range of flora and fauna in the Gran Paradiso National Park are also available. Visitors enjoyed the short walk that leads to the scenic waterfall at Lillaz, a little way east of Cogne. The region around Valnontey to the south of Cogne also has short walks offering easy access to the dramatic scenery.

One particularly noteworthy feature of the park, between Cogne and Valnontey, is the Paradisia alpine garden. When visitors visited in mid-summer the range of plants and flowers was quite astonishing and a highlight of our visit. 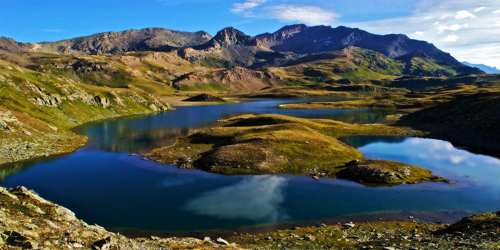 The park is located in the Graian Alps in the regions of Piedmont (in the Metropolitan City of Turin) and Aosta Valley in north-west Italy. It encompasses 703 square kilometers (173,715 acres) of alpine terrain. 10% of the park’s surface area is wooded. 16.5% is used for agriculture and pasture, 24% is uncultivated, and 40% is classified as sterile. 9.5% of the park’s surface area is occupied by 57 glaciers. The park’s mountains and valleys were sculpted by glaciers and streams. Altitudes in the park range from 800-4,061 meters (2,624-13,323 ft), with an average altitude of 2,000 meters (6,561 ft). Valley floors in the park are forested. There are alpine meadows at higher altitudes. There are rocks and glaciers at altitudes higher than the meadows. Gran Paradiso is the only mountain entirely within the boundaries of Italy that is over 4,000 meters (13,123 ft) high. Mont Blanc and the Matterhorn can be seen from its summit. In 1860, John Cowell became the first person to reach the summit. To the west, the park shares a boundary with France’s Vanoise National Park. They co-operate in managing the ibex population, which moves across their shared boundary seasonally.

Gran Paradiso National Park protects an area characterized mainly by an alpine environment. The mountains that make up the range, in the past have been cut and modeled by giant glaciers and by streams that created the valleys that we see today.

In the forests of the valley floor the most common trees are larches, mixed with spruces, Swiss stone pines and more rarely silver firs. Higher up the slopes the trees gradually thin out and make way for vast alpine pastures, rich with flowers in late spring. Rising even up to 4061 m of the Gran Paradiso only rocks and glaciers fill the landscape.

Along with the other wildlife in the park there are also thousands of ibex, which are the ‘trademark’ wildlife in Gran Paradiso, although for much of the year these remain above the tree line and visitors may not encounter them during a visit if they remain in the valleys, although walking quietly through the higher meadows and pastures they are quite a common sight.

The network of paths that crosses the Park extends for over 500 km through the five valleys included in the protected area. The paths can be used for walking, hiking, biking, and skiing and snowshoeing during the winter. Many of the paths are from the ancient hunting routes of King Vittorio Emanuele II from the 19th century. The route allows visitors to explore and to view the area while learning thanks to education plaques along the route.

There is also the alpine ibex path that is almost 40 km, which winds through dense woods, meadows, stony grounds, and lakes. The path allows the hiker to cross some of the most spectacular landscapes of the Park and to spot the typical alpine ibex that inhabits the protected area. Six days of walking and five nights at high altitudes are ideal for taking this fascinating journey, which can be done only in July and August. 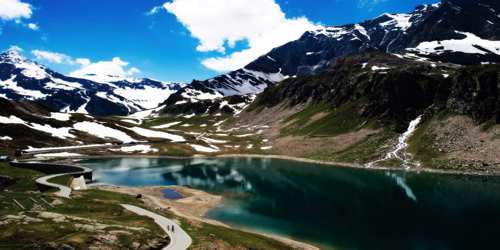 There are more than 100 bird species in the park, including Eurasian eagle-owl, rock ptarmigan, alpine accentor, and chough. Golden eagles nest on rocky ledges, and sometimes in trees. Wallcreeper are found on steep cliffs. There are black woodpeckers and nutcrackers in the park’s woodlands. The park supports many species of butterflies including apollos, peak whites, and southern white admirals.

The most popular activities in the Gran Paradiso National Park are hiking, climbing, and, in the colder months, cross-country skiing. Note that if visitors wish to climb Gran Paradiso itself they should start at Pont in the Vasavarenche valley.