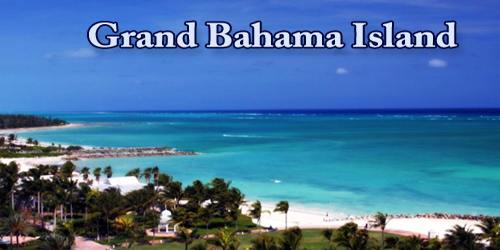 Grand Bahama (Native name: Grand Bahamian) Island is one of the most popular and the northernmost of the islands of the Bahamas, lying 103 kilometers (64 mi) off Palm Beach, Florida. It is the fourth largest island in the Bahamas island chain of approximately 700 islands and 2,400 cays. The island is roughly 530 square miles (1,400 km2) in area and approximately 153 kilometers (95 mi) long west to east and 24 kilometers (15 mi) at its widest point north to south. Administratively, the island consists of the Freeport Bonded Area and the districts of East Grand Bahama and West Grand Bahama. Nearly half of the homes on the island were destroyed in early September 2019 due to Hurricane Dorian.

Grand Bahama Island is nestled among miles upon miles of powder-white sands, nature preserves and emerald-green seas. This Island has a tropical monsoon climate, with a hot and wet season from May through October, and warm and dry season from November through April. 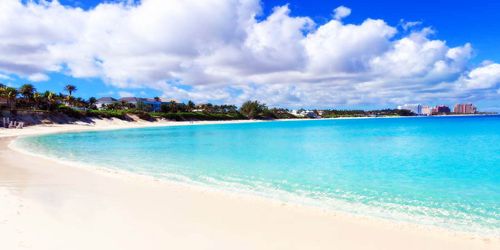 In Freeport the summer high temperatures average 31 °C (88 °F), with average lows of 26 °C (79 °F). During the winter, the average high temperature is 28 °C (82 °F), and the average low is 19 °C (66 °F). The rainy season in the Bahamas is from May to October. The hurricane season runs from June through November, with the greatest risk in the months of August, September, and October.

Grand Bahama Island’s economy is based on tourism (which experienced a dramatic boom in the 1960s), forest products (especially pine), and fishing. Important resort centers are Freeport, West End, Eight Mile Rock, and Pinders Point. Freeport is a busy industrial and trade centre with cement plants and an oil refinery. Grand Bahama has one of the largest single-installation bunkering terminals in the Western Hemisphere and a large container transshipment port, making Freeport a major hub for shipping lines. Area 530 square miles (1,373 square km). Pop. (2000) 46,994; (2010) 51,368.

The Spanish gave the island the name Gran Bajamar, meaning “Great Shallows”, and what the eventual name of the Bahamas islands as a whole is derived from. However, the Lucayan (pre-Columbian) name for the island was Bahama. Grand Bahama’s existence for almost two centuries was largely governed by the nature of these “great shallows” the coral reefs surrounding the island were treacherous, and repelled its Spanish claimants while attracting pirates, who would lure ships onto the reefs where they would run aground and be plundered. The Spaniards took little interest in the island after enslaving the native Lucayan inhabitants.

Great Britain claimed the Islands of The Bahamas in 1670, after British colonists left Bermuda for the island of Eleuthera, where they sought religious independence. More followed, and other ports and colonies gradually developed, bringing in their wake an army of pirates and privateers. Grand Bahama CoinGrand Bahama was probably well known to famous pirates like Blackbeard, Captain Kidd, and Henry Morgan, as its reefs would have been perfect for running aground vessels, a common pirate tactic. By 1720, the crown had successfully established control over the pirates, and the island probably saw a lot less visitors than it had during “the Golden Age of Piracy.” The sleepy colony lay largely undisturbed for another 200 years, when history finally caught up with it again.

On September 1, 2019, Hurricane Dorian struck the island as a Category 5 hurricane and caused catastrophic destruction.

One aspect that contributes to the economy of the Bahamas is what they directly export and import. The Bahamas ranks as the 137th largest exporter and 117th largest importer in the world. Some of the major trading partners include the United States, France, and Finland. Top exports include; passenger cargo ships, special purpose ships, and refined petroleum. Freeport, a city in Grand Bahama has some industries that also contribute to the economy. These major industries are pharmaceutical plants, Fragrance of The Bahamas perfume factory, an oil transshipment company, and an immunology research center. Despite the Bahamas being big exporters and importers, their agriculture and fisheries also help with the economy. They produce agriculture ranging from crops, poultry, livestock, to dairy. On commercial farms in Grand Bahama, vegetable and citrus production are produced and exported to other countries. For their fisheries, Crayfish and conch are their top exports.

Grand Bahama Island is the picture-perfect place for an unforgettable vacation. Families can go for swimming with dolphins, couples can treat themselves to a romantic dinner overlooking the ocean, and friends can try their luck at deep sea fishing during a weekend getaway.

The capital, Freeport, is the second biggest city in the Bahamas, though Port Lucaya has now replaced it as the tourist hub for shopping, dining, and entertainment. Port Lucaya Marketplace sells jewelry and straw goods as well as other souvenirs, and the marina is a social hot spot for tourists and boaters. Despite the island’s large all-inclusive resorts and hotels, it’s still possible to escape the crowds. Grand Bahama is home to one of the world’s longest underwater cave systems, and nature-lovers can spot many native bird species in the three national parks.