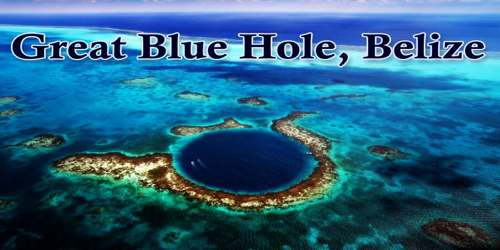 The Great Blue Hole, also known as the Belize Blue Hole is a giant marine sinkhole off the coast of Belize. It lies near the center of Lighthouse Reef, a small atoll 70 km (43 mi) from the mainland and Belize City. The hole is circular in shape, 318 m (1,043 ft) across and 124 m (407 ft) deep. It was formed during several episodes of quaternary glaciation when sea levels were much lower. Analysis of stalactites found in the Great Blue Hole shows that formation took place 153,000; 66,000; 60,000; and 15,000 years ago. As the ocean began to rise again, the cave was flooded.

The Blue Hole itself is the opening to a system of caves and passageways that penetrate this undersea mountain. In various places, massive limestone stalactites hang down from what was once the ceiling of air-filled caves thousands of years before the end of the last Ice Age 15,000 years ago. When the ice melted the sea level rose, flooding the caves. This process occurred in stages. Evidence for this are the shelves and ledges, carved into the limestone by the sea, which run the complete interior circumference of the Blue Hole at various depths.

Divers and underwater explorers including French writer and explorer Jacques Cousteau have fallen under the spell of the world’s biggest sinkhole, which measures around 1,000 feet (304m) across and plunges to 400 feet (122m) deep. Its deepest, darkest secrets remained a mystery until late 2018, when an expedition team including Jacques’ grandson, Fabien Cousteau, and Sir Richard Branson shot video from a submarine, revealing stalactites and “unidentifiable tracks”.

Initial measured depth of Great Blue Hole was 125 m (410 ft) which is the most often cited depth up to this day. An expedition by the Cambrian Foundation in 1997 measured the hole’s depth as 124 m (407 ft) at its deepest point. This difference in measurement can be explained by ongoing sedimentation or by imprecision in measurements. The expedition’s goal was to collect core samples from the Blue Hole’s floor and document the cave system. To accomplish these tasks, all of the divers had to be certified in cave diving and mixed gases.

Facts About The Great Blue Hole –

The Great Blue Hole is a part of the larger Belize Barrier Reef Reserve System, a World Heritage Site of the United Nations Educational, Scientific and Cultural Organization (UNESCO).

The Great Blue Hole is a “karst-eroded sinkhole.” It was once a cave at the center of an underground tunnel complex whose ceiling collapsed. Some of the tunnels are thought to be linked right through to the mainland, though this has never been conclusively proved. Mysterious and legends always have been around the Great (or Belize) Blue Hole.

This is a popular spot among recreational scuba divers who are lured by the opportunity to dive in sometimes crystal-clear water and meet several species of fish, including midnight parrotfish, Caribbean reef shark, and other juvenile fish species. Other species of sharks, such as the bull shark, lemon, black tip, reef and hammerheads, have been reported there, but are not regularly sighted. Usually, day trips to the Great Blue Hole are full-day trips from the coastal tourist communities in Belize.