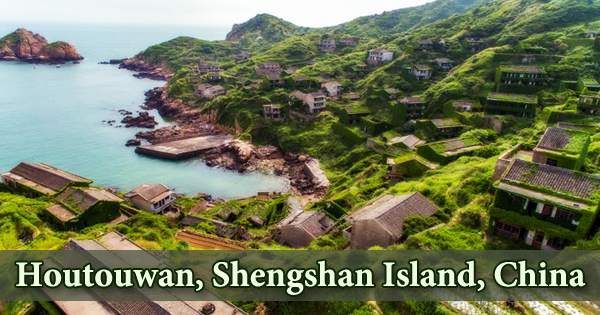 Houtouwan (Chinese: 后头湾; pinyin: Hòutóuwān) is a Chinese island located north of Shengshan Island (Chinese: 嵊山岛; pinyin: Shèngshān dǎo), one of the 400 Shengsi Islands. The settlement is located near the sea, atop cliffs, and mist-shrouded mountains that obscure the horizon. The community previously housed about 2,000 people, including fishermen, but it was abandoned in the early 1990s. Despite the fact that the village has just a few residents now, it is a popular tourist destination. Hundreds of tourists visit Houtouwan every day, walking through tiny footpaths past dilapidated cottages engulfed in foliage. Problems with education and food distribution are among the reasons for the village’s near-complete abandonment. Greenery has taken over what was once a lively settlement after its abandonment.

This green treasure, just 40 miles from Shanghai, was once a bustling fishing village with a population of 2,000 fishermen and their families. In the 1950s, when the Chinese fishing industry and fish market were expanding, people began to settle in the area. Houtouwan was previously a thriving fishing community, with a population of around 3,000 people in the 1980s. However, because of its remote and hard-to-access location, its residents started to move out in the ’90s.

By the last quarter of the twentieth century, the village had grown to around 2000 residents, most of whom were fishermen. The town was depopulated and absorbed into a nearby village in 2002. Empty cottages in the ocean-facing, cliffside community, some of which are still furnished, have been taken over by a carpet of lush climbing plants after decades of abandonment. The only difference between this settlement and a truly bleak, deserted terrain is that each and every building in the vicinity is surrounded and covered in lush flora.

While the majority of the structures are in a state of disrepair and are partially ruined, there is a beauty to the area that has attracted visitors from all around the region. Residents began relocating to the mainland in pursuit of alternative employment and a better living in the early 1990s, as the little bay became increasingly unable to satisfy the needs of the burgeoning fish business, a scenario that was prevalent in many small Chinese communities. Residents left the community for a variety of reasons, including a lack of decent roads and schools. Green forces have taken over the settlement during the last two decades, covering practically every surface with lush overgrown flora. an abandoned fishing village

A peek inside the desolate dwellings reveals decaying household belongings and pieces of furniture frozen exactly where they were set years ago when the inhabitants fled, adding to the otherworldliness. The charm of this community rests in its undisturbed buildings, albeit everything has been left as is, from the interiors of the houses to the layout of each yard, as if the owners are due back at any minute. Houtouwan is one of the world’s most fascinating abandoned sites because of its strangely captivating ambiance. When a series of fascinating images of the lonely village went viral in 2015, Houtouwan shot to celebrity among Chinese netizens.

Fish populations have declined as a result of increased competition from nearby Shanghai, which was the inhabitants’ principal source of income. In addition, lax enforcement of fishing restrictions at the time resulted in food delivery issues, which contributed to the mass migration. As a result, inhabitants went to nearby modern cities such as Shanghai in order to take advantage of improved services. Mother nature gradually recovered her property, and the abandoned village was eventually swallowed up by greenery.

Following the mass flight of people, the decaying dwellings became ivy-covered. The once-popular fishing community is now engulfed in vegetation and engulfed in creeping vines. Except for the chattering of birds, mosquito buzz, and the seaside wind, the ghost town is now filled with an unsettling silence. This secluded community was developed on Shengshan Island, which is just approximately 40 miles from Shanghai but is not accessible by ferry. The town had a population of 3,000 people when it was first created in the 1980s, which is a large number for new development.

Despite this, many people realized by the 1990s that the island’s isolation owing to its position would soon become a major issue. As a result, locals left, and by the early 2000s, no one was left to claim the area’s homes or businesses. It quickly became a travel hotspot for nature enthusiasts and an Internet sensation. Soon after, travelers from the mainland began flocking to the desolate settlement. As a result, Shengshan Island government officials had to devise a number of procedures to manage the number of tourists that visited the town on a regular basis and find ways to monetize it.

The archipelago, which has over 400 islets, is a favorite weekend retreat from Shanghai. Shengshan is the easternmost island, and it is known for its seafood, as is nearby Gouqi Island. While the word ‘ghost town’ does not refer to many actual ghost towns around the world, it does evoke the same sense of eeriness as the others when it comes to a lack of human inhabitants. For over a decade, Houtouwan went unseen before people began to notice its massive overgrowth.

Some locals who used to live on Houtouwan have turned to tourism as a source of income, showing an ever-increasing stream of visitors around the island’s gorgeous landscape and selling them water, the island’s only commodity. Tourists have been warned not to enter decaying structures by the erection of warning signs. In addition, lodging facilities have been established throughout the island. Summer is the greatest season to visit the village because the vegetation is at its peak.