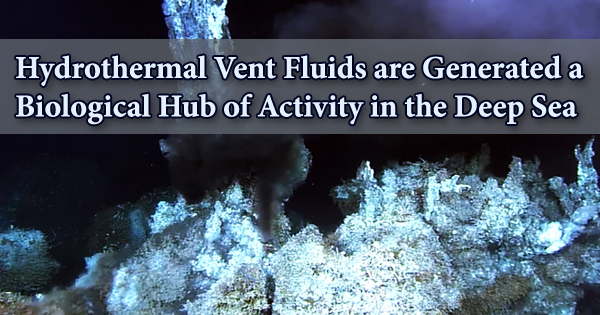 The Gorda Ridge spreading center in the northeast Pacific Ocean produces hydrothermal vent fluids that generate a biological hub of activity in the deep water. There, in the dark ocean, a unique food web feeds on chemical energy from the venting fluids rather than sunlight. A wide array of microbial eukaryotes, or protists, that feed on chemosynthetic bacteria and archaea are among the organisms having a field day dining at the Gorda Ridge vents.

According to a new study, protistan grazing imposes a greater predation pressure at hydrothermal vent sites than in the surrounding deep-sea environment, which is a critical mechanism for carbon transfer and recycling in microbial food webs.

According to the study Protistan grazing influences microbial communities and carbon cycling at deep-sea hydrothermal vents published in the Proceedings of the National Academy of Sciences, “Our findings provide the first estimate of protistan grazing pressure within hydrothermal vent food webs, highlighting the important role that diverse deep-sea protistan communities play in deep-sea carbon cycling.”

The study claims that protists act as a connection between primary producers and higher trophic levels and that their grazing is a critical mechanism for carbon transfer and recycling in microbial food webs. Protists eat 28-62 percent of the daily stock of bacteria and archaea biomass in hydrothermal vent fluids discharged from the Gorda Ridge, roughly 200 kilometers off the coast of southern Oregon, according to the study.

Furthermore, researchers estimate that protistan grazing may consume or transmit up to 22% of the carbon fixed by the chemosynthetic population in the discharging vent fluids. Hydrothermal vents were originally found in 1977 by scientists while studying an oceanic spreading ridge near the Galapagos Islands. The scientists were also surprised to discover that the hydrothermal vents were surrounded by a vast number of creatures they had never seen before.

Chemical reactions resulting from the interaction of salt water and heated lava linked with underwater volcanoes support these living populations. Though the destiny of all that carbon is unknown, the article claims that “protistan grazing will release a part of the organic carbon into the microbial loop as a result of excretion, egestion, and sloppy feeding,” and that some of it will be picked up by bigger creatures that consume protistan cells.

Seawater percolates down via fractures in the ocean crust around spreading centers or subduction zones, forming hydrothermal vents (places on Earth where two tectonic plates move away or towards one another). The vents are formed when cold saltwater is heated by hot magma and reemerges. The temperature of seawater at hydrothermal vents may reach above 700° Fahrenheit.

“Being able to do this research at a deep-sea vent site was really exciting because the food web there is so fascinating, and it’s powered by what’s happening at this discharging vent fluid,” said Hu, who was onboard the E/V Nautilus during the May-June 2019 cruise. “Below the euphotic zone, outside of the reach of sunlight, there is a complete microbial system and population at work. I was excited to expand what we know about the microbial communities at these vents.”

Quantitative data, according to Hu and co-author Julie Huber, are critical for understanding how food webs work at pristine and undisturbed vent locations.

“The ocean provides us with a number of ecosystem services that many people are familiar with, such as seafood and carbon sinks. Yet, when it comes to microbial ecosystem services, particularly in the deep water, we just don’t have enough information on how those food webs function,” said Huber, an associate scientist in WHOI’s Marine Chemistry and Geochemistry Department.

Obtaining baseline measurements “is increasingly important as these habitats are being looked at for deep-sea mining or carbon sequestration. How might that impact how much carbon is produced, exported, or recycled?” she said.

“We need to understand these habitats and the ecosystems they support,” Huber said. “This research is helping us link some previously unconnected dots.”

NASA, the National Oceanic and Atmospheric Administration, the Ocean Exploration Trust, the National Science Foundation, and WHOI all contributed to the study.