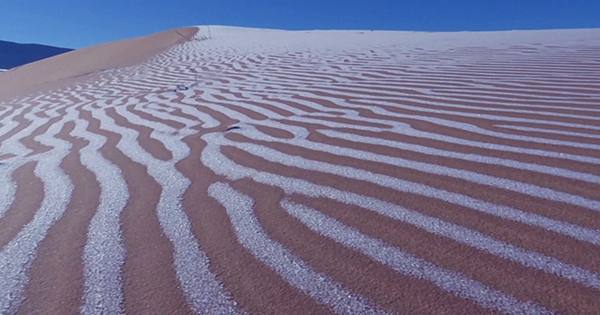 The Sahara is famously warm, dry, and generally hospitable. Yes, it rains, and yes it is occasionally painted with green pepper trees but it is a very rare occasion to see the sun shining due to the scattering of snow. In fact, this rare event happened this week for the fourth time in 42 years. Luckily, local photographer Karim Bouchetata was there to capture it.

The Sahara (desert) stretches 6.6 million kilometers (3.3 million miles) across North Africa from the Atlantic Ocean to the Red Sea, so it is quite unusual to see reddish-white scattering. Africa certainly has ice. In Tanzania, Kilimanjaro is topped by the famous ice cap, in the Atlas Mountains, just 2 kilometers (45 miles) from Marrakech; Oukaimeden has the unparalleled honor of being the highest ski resort in Africa at 3,200 meters (10,500 feet).

But Bouchetata contained the ice in the bays just outside the town of Sefra in northwestern Algeria. Ain Sefra sits at an altitude of about a thousand meters above sea level in the Atlas Mountains near the Algerian-Moroccan border, and there has been snowfall there before.

In fact, this eruption of ice is nothing compared to the snowfall that occurred in December 2016 or January 2018, wherein in some places, it was reported as 40.6 centimeters (16 inches). But as seen before that time 1979, we are still checking it as exciting.

Seeing the red dunes smattered with white may look like a scene from one of the polar regions of Mars, but strangely, it also goes the other way. In 2018, the sand from the Sahara flew all the way to Europe and turned to snow orange.

The sand, dust, and pollen particles travel across northern Africa to Europe, where they mix with rain in the atmosphere, falling as orange snow for the red sands of the Sahara. Unfortunately, this ice phenomenon doesn’t usually last long, so we’re lucky local photographers to see this other term and share it with the rest of us.