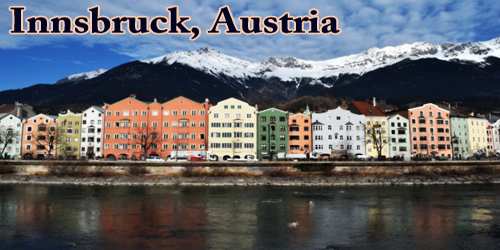 Innsbruck (German: ˈɪnsbʁʊk; Bavarian: ˈɪnʃprʊk) also known as the Capital of the Alps, and it is a city of contrasts in the Alpine province of Tyrol. From a tiny golden roof in the historic old town to the majestic Nordkette mountain range, there is always something to see and do for active nature lovers as well as culture vultures. It is the fifth-largest city in Austria, and it is in the Inn valley, at its junction with the Wipp valley, which provides access to the Brenner Pass some 30 km (18.6 mi) to the south.

First mentioned in 1180 as a small market town belonging to the Bavarian counts of Andech, it developed rapidly because of its strategic position at the junction of the great trade routes from Italy to Germany via the Brenner Pass and from Switzerland and western Europe. The bridge (Brücke) over the Inn originally carried this traffic and gave the city its name and its insignia. Innsbruck was chartered in 1239, passed to the Habsburgs in 1363, and in 1420 became the capital of Tirol and the ducal residence under Frederick, the duke “of the empty pockets.” Napoleon gave the city to the kingdom of Bavaria in 1806, and during the War of Liberation (1809) four battles were fought around Berg Isel, a hill (2,461 feet (750 meters)) immediately to the south, by Tirolian patriots led by Andreas Hofer against the Bavarians and the French. 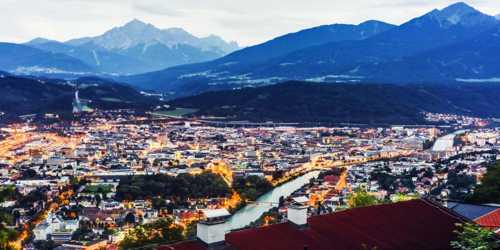 Located in the broad valley between high mountains, the so-called North Chain in the Karwendel Alps (Hafelekarspitze, 2,334 meters or 7,657 feet) to the north, and the Patscherkofel (2,246 m or 7,369 ft) and Serles (2,718 m or 8,917 ft) to the south. Innsbruck is an internationally renowned winter sports center; it hosted the 1964 and 1976 Winter Olympics as well as the 1984 and 1988 Winter Paralympics. Innsbruck also hosted the first Winter Youth Olympics in 2012. The name translates as “Bridge over the River Inn”.

While the Golden Roof, a balcony from the 15th century adorned with 2,657 fire-gilded copper tiles, is the symbol of Innsbruck, other well-known landmarks include the Bergisel Olympic ski jump and Ambras Castle. The Hafelekarspitze, an Alpine peak, can be reached within an hour from the city center via the Nordkette cableway.

The old town has narrow streets lined with medieval houses and arcades. One of the most famous buildings is the Fürstenburg, with a balcony with a gilded copper roof, supposedly built by Duke Frederick and refashioned by the emperor Maximilian in about 1500. Other notable landmarks include the Hofburg (1754–70), on the site of a 15th-century ducal residence) and the Franciscan, or Court, church (1553–63), containing the mausoleum dedicated to Maximilian I and the tombs of Hofer and other Tirolian heroes. The university was founded by Emperor Leopold I in 1677, and its great library was a gift of the empress Maria Theresa in 1745. There are four major museums: the Ferdinandeum, with prehistoric, industrial-art, and natural-history collections and a picture gallery; the Tirolean Folk Art Museum; the Museum of the Imperial Rifles; and parts of the collections of the archduke Ferdinand II, in the Castle Ambras.

The earliest traces suggest initial inhabitation in the early Stone Age. Surviving pre-Roman place names show that the area has been populated continuously. In the 4th century, the Romans established the army station Veldidena (the name survives in today’s urban district Wilten) at Oenipons (Innsbruck), to protect the economically important commercial road from Verona-Brenner-Augsburg in their province of Raetia. The first mention of Innsbruck dates back to the name Oeni Pontum or Oeni Pons which is Latin for bridge (pons) over the Inn (Oenus), which was an important crossing point over the Inn river. The Counts of Andechs acquired the town in 1180.

In 1248, Count Albert III took over Tyrol, thereby unifying the counties around Brenner Pass. In 1429, Innsbruck became the capital of Tyrol under the ruling of Maximilion I. Ferdinand II, Archduke of Austria ruled over Tyrol in 1564. Innsbruck was under the administration of the Austrian till the 18th century. Innsbruck University was established in 1669.

Austria was taken over by Nazi Germany in Anschluss in 1938. From 1943 to 1945, the city was bombed around 21 times by the Allies in World War II and suffered heavy damages. Later in 1964, the city hosted the Winter Olympics and regained its popularity. In 1976, Innsbruck again served as the host for the Winter Olympics. Today, it has become a famous winter sports destination for athletes and recreational skiers. In 1996, the European Union approved further cultural and economic integration between the Austrian province of Tyrol and the Italian autonomous provinces of South Tyrol and Trentino by recognizing the creation of the Euroregion Tyrol-South Tyrol-Trentino. 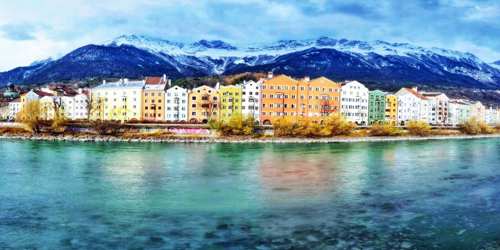 Innsbruck is one of the most popular tourist and health resorts and winter-sports centers in central Europe. It is a rail and market center and manufactures textiles (especially loden garments), shoes, beer, and musical instruments; there also is wood- and metalworking as well as food processing. In the late 20th century several companies began producing precision electrical equipment and electronics in the city as well.

Innsbruck has a humid continental climate (Köppen Dfb) using 0 °C (32 °F) isotherm or oceanic climate (Cfb) using the original −3 °C (27 °F) isotherm since it has larger annual temperature differences than most of Central Europe due to its location in the center of the Continent and its position around mountainous terrains. Winters are often very cold (colder than those of most major European cities) and snowy, although the foehn wind sometimes brings pronounced thaws.

Spring is brief; days start to get warm, often over 15 °C (59 °F), but nights remain cool or even freezing. Summer is highly variable and unpredictable. Days can be cool 17 °C (63 °F) and rainy, or sunny and extremely hot, sometimes hitting 34 °C (93 °F). In summer, as expected for an alpine-influenced climate, the diurnal temperature variation is often very high as nights usually remain cool, being 12 °C (54 °F) on average, but sometimes dipping as low as 6 °C (43 °F). The average annual temperature is 9 °C (48 °F).

Innsbruck’s most famous landmark is a roof. But not just any roof. The Goldenes Dachl, the “little golden roof”, is adorned with 2,657 fire-gilt copper tiles that glimmer in the sun and reflect the glory days of Emperor Maximilian I, who made Innsbruck his imperial capital 500 years ago. “Insprucke”, the historic name of the town is derived from the original meaning “Bridge over the Inn”. Coveted by empires and dynasties throughout its history, Innsbruck is a living treasure house of history and culture. Architectural gems like the splendid Imperial Palace lurk around every corner of the old town. It’s worthwhile Giant’s Hall and Baroque Cellar give visitors a palpable sense of the elegance and wealth of the former Habsburg Dynasty. Nearby Court Church, also called “Schwarzmanderkirche“ (literally “Black Men Church”), houses the empty tomb of Emperor Maximilian I, and the City Tower provides sweeping views of the old town and visitors guessed it of the Golden Roof. Lively Maria-Theresien-Straße is the main pedestrianised artery of Innsbruck. Architecturally, expect a mix of the past and present. Historic façades live harmoniously with the subtle concrete façade of Kaufhaus Tyrol retail complex, which was designed by British architect David Chipperfield.

Innsbruck is divided into nine boroughs (cadastral settlements) that were formed from previously independent municipalities or villages. These nine boroughs are further divided into twenty wards (cadastral districts). All wards are within one borough, except for the ward of Hungerburg (Upper Innsbruck), which is divided between two. For statistical purposes, Innsbruck is further divided into forty-two statistical units (Statistischer Bezirk) and 178 numbered blocks (Zählsprengel).

Given its central location, Innsbruck remains one of the best places to visit in Europe, especially if any visitors want to explore the rest of Europe. Italy, Germany, and Switzerland are only a short drive or train ride away.