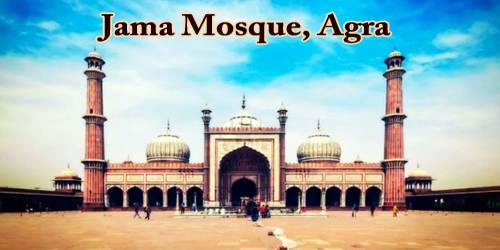 Jama Masjid (Mosque) at Agra also known as “Friday Mosque” is a seventeenth-century structure and is one of the largest mosques built by the Mughals in India. It is opposite the Agra fort and overlooking the Agra Fort Railway Station. Built by Shah Jahan in 1648 AD, it was dedicated to his daughter, Jahanara Begum. The perfection in its art and design make it one of the most visited tourist attractions in Agra. It is constructed on a large platform that is accessible by a flight of 35 steps. Indeed, its enormous size makes it visible from a distance and attracts the believers from afar. It is a monument that evokes wonder and awe and is of immense cultural and historical importance.

The Jama Masjid is built mainly of red sandstone and white marble that stand as a testimony to the magnificent Mughal architecture. The design of Jama Masjid is unique. It has a fountain at the center and is supported by four kiosks in the courtyard. The interior walls have scriptures in the Persian style praising for Shah Jahan and Jahan Ara. The inlaid panels of work here are quite similar to that of the Taj Mahal and is common to all the monuments and structures built by the Mughals in Agra. Every Friday, special prayers are conducted at this mosque which is attended by thousands of devotees. The Tomb of Salim Chisti is a part of the mosque compound. 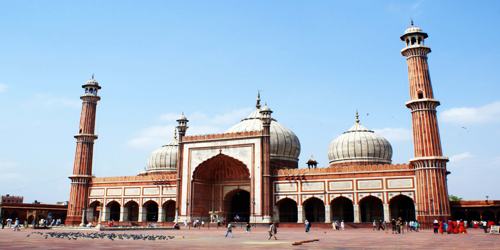 History of the Mosque –

The Mosque was built by the Mughal emperor, Shah Jahan in the honor of his eldest daughter, Jahanara Begum Sahiba in 1648 A.D. There was a spacious, octagonal Tripolia Chowk which existed between the Jama Masjid and the Delhi gate of the Agra Fort. This Tropolia was destroyed in order to create the Agra Fort Railway Station. The cloisters have engrailed arches supported on pillars. The main entrance is through the eastern side. The prayer chamber has a façade with a broad arched iwan in its center and is adorned with slender turrets alternated with kiosks. Its dome is the largest and highest of the three domes crowning the sanctuary.

All the bulbous domes have inverted lotus and Kalash finials on the top and have narrow zigzag courses of white marble alternated by broad bands of red stone. There is a fountain with four kiosks in its corners in the center of the courtyard. The interiors of the western wall have a beautiful mihrab and pulpit in white marble. The Persian inscription in white marble inlaid with the black stone on the archway of the central portal is in praise of Jahanara and Shah Jshan. The pristine beauty of the mosque must have been breathtaking as it was compared to the Beaty of the Baitul-Mamur, the fabulous mosque of rubies and pearls situated in the fourth sky. It is said that it was once surrounded by a market place called Tripolia set in an octagonal (Muthamman) Chowk that was built between the Delhi Gate and the Jami Masjid. But, it was later destroyed in 1871-73 A.D. to acquire space for laying down the railway tracks for the city.

It required six years and 5,000 workers to finish. It was made using red sandstone and marble.

Jama Masjid is the second most visited place after in Agra after the Taj Mahal. A few steps high, it has various domes, out of which the prayer dome is the largest. Buland Darwaza is forty meters high and is built of red sandstone. It is semi-octagonal in pattern and contains three massive domes at the top. These domes are followed by three smaller domes and twelve tiny domes at lower levels.

The impressive arches at the courtyard are supported by pillars covered in red sandstone. The domes are decorated by an inverted lotus and are ornamented by a Kalash at the top. The designs on top of these domes are made of alternating stripes of marble and red sandstone. There is a Madrasa in the central courtyard, where small kids are taught Islamic language and culture. The interior walls have been made up of white marble singing the praise of the ruler in Persian inscriptions. Entry to the Jama Mosque is possible through five entrances. The gateway is embellished with small layers of sandstone.

Jami Masjid (Mosque) is beautifully decorated with paintings, inlaid stones, carvings, and glazed tiles. The building comprises pillared Dalan, a beautiful ‘Chhajja’, and the ‘Chhatri’ on the roof. The main Iwan of the building is rather simple and contains a central arch with geometrical designs.

Interesting Facts of the Mosque – 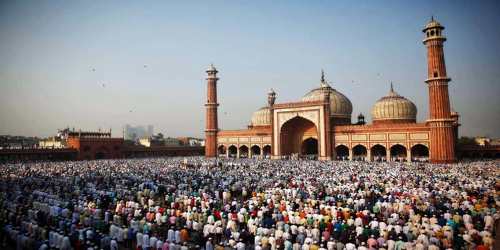 Special Namaz (Prayer) is conducted at Jama Masjid every Friday, which is attended by devotees in large numbers. This is the only day when this place sees huge crowds which remain quite empty and serene on the other days. Jama Masjid is considered to be very sacred by the Muslims; hence tourists are expected to observe silence when they go to the mosque.

Jama Masjid (Mosque) is located in the city of Agra, Uttar Pradesh, India. During the summers it can get very hot here, with the average temperature fluctuating between 40-45°C. However, if visitors are undaunted by the heat, they can certainly visit this structure during summers. During winters, the weather turns pleasant and comfortable. A lot of tourists, both domestic and international, prefer visiting Agra during this time.

Jama Masjid, one of the most beautiful tourist attractions in Agra, and it is a religious place of worship, and hence, entry is completely free to tourists, both domestic and international.