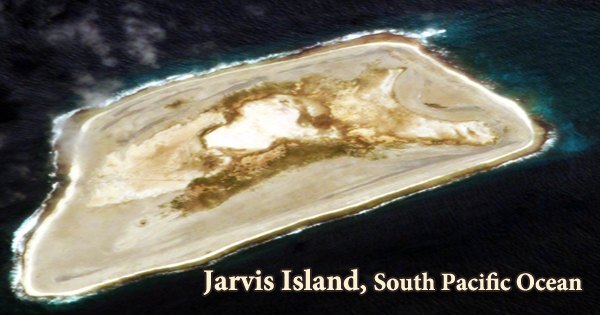 Jarvis Island (/ˈdʒɑːrvɪs/; formerly known as Bunker Island or Bunker’s Shoal), also known as Bunker Island, Volunteer Island, Jervis Island, or Brook Island, is a coral atoll in the Northern Line Islands of the Pacific Ocean, about 1,000 miles (1,600 kilometers) southwest of Honolulu. It’s a 4.5-square-kilometer deserted coral island in the South Pacific Ocean, almost halfway between Hawaii and the Cook Islands. The atoll is 1.6 square miles in size (4.1 square km). Capt. Brown of the British ship Eliza Francis spotted it in 1821, and the United States claimed it in 1856 under the Guano Act.

The act provided people of the United States the right to claim any unclaimed, uninhabited islands for the purpose of mining guano (bird droppings). Guano was a very precious commodity at the time, and it was used to make fertilizer. From 1857 to 1879, the guano deposits were worked; Britain acquired Jarvis in 1889 but did not develop it. This unincorporated, unorganized region of the United States is part of the National Wildlife Refuge system and is administered by the US Fish and Wildlife Service of the US Department of the Interior.

Jarvis is a Line Island that is also classified as a United States Minor Outlying Island for statistics purposes. The Pacific Phosphate Company of London leased the island in 1906, but mining was not pursued further. Jarvis was reoccupied and recaptured by the United States in 1935, and on May 13, 1936, it was placed under the jurisdiction of the Department of the Interior (Executive Order 7368). Following raids by Japanese forces in 1942, the new colonists were evacuated from the island, and the island has been mostly uninhabited since then.

Jarvis Island is the largest of three U.S. equatorial possessions, which include Baker Island and Howland Island. Jarvis Island has been a National Wildlife Refuge since 1974, and visitors can only visit with a special permit issued by the US Fish and Wildlife Service and the US Department of the Interior. Permits are normally issued to researchers and other like individuals. Access to Jarvis Island has also been provided to amateur radio operators. While there are a few offshore anchorage locations listed on maps, Jarvis Island has no ports or harbors, and currents can be dangerous.

A boat landing point is located in the middle of the western shoreline, near a disintegrating day beacon, and another is located near the island’s southwest corner. During the International Geophysical Year in 1957-1958, scientists occupied Millersville on the island’s western side. The island has been administered as part of the National Wildlife Refuge system by the US Department of the Interior Fish and Wildlife Service since June 1974.

Jarvis Island is frequently lumped in with Baker Island and Howland Island, both of which are US Minor Outlying Islands and are nearly a thousand miles west of Jarvis. The island measures approximately 3.2 kilometers in length and 1.6 kilometers in width. Jarvis is a sandy coral island platform with a lower core basin and a short bordering reef that is generally 4.6 to 6.1 meters high (maximum 7 meters). The environment on the island is tropical desert, with hot days, persistent wind, and strong sun.

The nights, on the other hand, are fairly pleasant. The land is largely sandy and rises to a height of 23 feet (7 meters). The guano workers had to blow away a part of the coral reef to create a tunnel for the guano to be transported through because the island is surrounded by 100 meters of coral reef; otherwise, there are no anchorage facilities and all vessels must be anchored offshore.

There is no evidence that the island has ever hosted a human population that can sustain itself. Seabirds, shorebirds, and marine species use the scanty bunch grass, prostrate vines, and low-growing shrubs as a nesting, roosting, and foraging habitat. The island is described as tropical, with little rainfall, persistent wind, and searing sun. A submarine terrace (water depth 4 to 20 meters) extends one kilometer offshore. During the most recent interglacial period, around 125,000 years ago, when sea levels were 5–10 meters higher than they are today, this island was submerged underwater.

The Line Islands linear volcanic chain, the majority of which is part of Kiribati, includes Jarvis Island. This linear pattern of islands and seamounts has long been thought to represent a hotspot trail comparable to that of Hawai’i, but recent research has revealed that the age of volcanoes along important stretches of the chain is virtually identical. The ruins of a nineteenth-century tram track can be seen in the dry lagoon bed at the island’s center, and the late 1930s-era lighthouse-shaped day beacon at Millersville still stands on the western shore.

Within the Jarvis Island EEZ, there are a few small to moderate-sized seamounts with ages ranging from 70 to 40 million years. The island does not have an airport, nor does it have a significant terminal or port. A day beacon is located around the middle of the west coast, and there is some offshore anchorage. An abyssal plain more than 5,000 meters deep dominates the seafloor landscape.