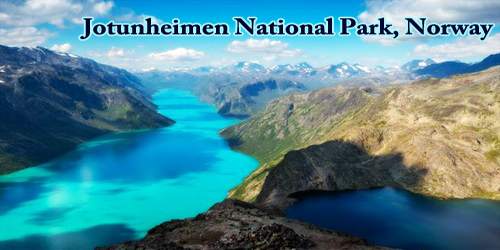 Jotunheimen National Park (Norwegian: Jotunheimen nasjonalpark) is a national park, found in southern Norway, inland from the famous fjords, Jotunheimen looks like something out of a fantasy novel. The park recognized as one of the country’s premier hiking and fishing regions. The national park covers 1,151 square kilometers (444 sq mi) and is part of the larger area Jotunheimen. More than 250 peaks rise above an elevation of 1,900 meters (6,200 ft), including Northern Europe’s two highest peaks: Galdhøpiggen at 2,469 meters (8,100 ft), and Glittertind at 2,465 meters (8,087 ft).

The park is made up of countless towering mountains bordered by icy lakes and glaciers across its alpine landscapes. With its undulating terrain, Jotunheim is a natural fit for hikers and mountaineers. Store Skagastølstind is a rather challenging peak in the park, but for something a little less hair-raising, simply look to the rest of the Hurrungane range.

The National Park covers most of the mountainous region of Jotunheimen, including Hurrungane, but Utladalen and its surroundings are within Utladalen Landscape Protection Area. Geographically, it lies in both Innlandet and Vestland counties. Geologically the Jotunheimen is a Precambrian province. Glaciers have carved the hard gabbro rock massifs of the Jotunheimen, leaving numerous valleys and the many peaks. Wildlife includes the reindeer, elk, deer, wolverines, and lynx. Most lakes and rivers hold trout. 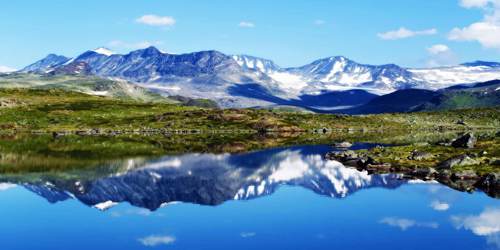 The name “Jotunheimen” (“Home of the Giants”) –

It was the Norwegian poet, Aasmund Olavsson Vinje, who gave these mountains their name, the Jøtunheimen, in 1862, inspired by the wild landscape and Norse mythology. The Giants or Trolls (Jotnane) have their home here. Jøtunheimen later became Jotunheimen, the name still used today for this area, which has the highest mountains in northern Europe. A memorial was raised in 1909 to Aa. O.Vinje at the western end of Lake Bygdin at his dear Eidsbugarden at today’s outskirts of the national park where he had a private hut.

Jotunheimen is Norway’s most famous national park and home to the country’s tallest peaks, including Northern Europe’s highest mountain, Galdhøpiggen. The famous Besseggen Ridge alone draws tens of thousands of hikers every year.

Jotunheimen has been the site of hunting since before recorded time. Remains of Stone Age hunting camps have been found near the lakes Gjende and Russvatnet. These remains extend through the bronze and Iron Age, up to recorded times. The high pastures have been used as seters for at least 1000 years.

A “Royal Road” decree from the 15th century required that the residents of Lom must keep the mountain crossing passable to the middle of the Sognefjell, allowing folk from the north Gudbrandsdal access to their trading town of the period, Bergen. Caravans carried farm products down the mountains and returned with salt, iron, cloth, and lutefisk.

By Royal Decree in December 1980, a national park of 1145 square kilometers was initially established in the heart of Jotunheimen. It includes much of the best of the region, including the Galdhø plateau, the Glittertind massif, Hurrungane, and the Gjende area. The park links to the Utladalen Nature Reserve, an area of 300 square kilometers (120 sq mi).

In February 2020, Secrets of the Ice Program researchers discovered a 1,500-year-old Viking arrowhead dating back to the Germanic Iron age and locked in a glacier in southern Norway caused by the climate change in the Jotunheimen Mountains. The arrowhead made of iron was revealed with its cracked wooden shaft and a feather is 17 cm long and weighs just 28 grams. 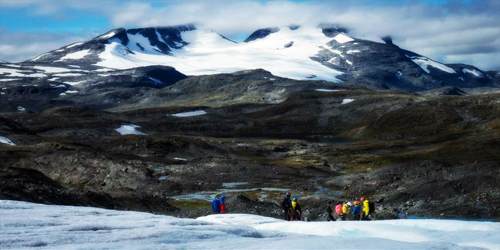 Mountain climbing in Jotunheimen is as popular today as when the English started to explore these mountains during the 1800s and many are still following in the footsteps of Slingsby and the other pioneers. In Jotunheimen, this is not just a dream. Mountain climbers and families with children find their way to Jotunheimen. Here visitors can enjoy the lush, flowering vegetation, experience the magic of the blue ice, master the mountain wall and go hiking for days in scree, drifts of snow, and mighty mountains. Or just enjoy the view.

In the mountain, the trails are often rocky and wet. Some hikes cross creeks and rivers and while bridges are placed out in summer, changing conditions can mean a water crossing is a possibility.

For the longer day hikes, some hiking experience is required. Don’t tackle a multi-day hike if any visitors haven’t done long day hikes before. The trails can be quite remote and there is often no mobile phone coverage. Pack more food and clothes than visitors think they will need and consider hiring a guide if they are unsure how they will handle it.

For less demanding trails that visitors can hike within a few hours, check out the trails along the Valdresflye scenic route, with both Gjende and Hindsæter serving as a good base for quick hikes. In Jotunheimen, there is space for both the peak hiker and the flower lover. People who love mountains and first-time travelers alike can enjoy themselves here.

Fluctuations in the mountains –

The barren basis of life in the mountains means that many species are vulnerable and completely dependent on good access to food and undisturbed areas. This is the only way they can keep the stock going. Some years the mountains are full of small and hot-headed lemmings. Large stocks of small rodents providing good living conditions and more food for predators and birds of prey. During these years the grouse has an easier life and produces more fledglings in each litter. The stock of grouse increases after good years of small rodents and falls correspondingly following years of low numbers of small rodents. Life in the high mountains is only for those who have cracked the code. Not everything can survive long winters and high winds. Here visitors will find animals and birds that survive in conditions they would consider impossible.

Most of Jotunheimen lies above the treeline at 800–1,000 meters above sea level and Galdhøpiggen reaches almost 2,500 meters. In Norway, that elevation means that summer starts quite late. It is not uncommon to be able to ski in Jotunheimen in June, but by the end of the month, it’s usually possible to start hiking.

July and August are easily the most popular months and when you can expect to see crowds in the tourist lodges and on the famous routes. On very nice days you can get lucky with temperatures above 20°C, but it is more common to experience temperatures between 10 and 15°C, and even days that are much colder. Be sure to bring warm clothes even if it’s mid-July.

Summer in Jotunhiemen is short and by September the weather is much colder and there is sometimes even snow. The leaves turn a brilliant red and yellow during September decorating the area in amazing color. Weekends are still a popular time in the park, but it is much quieter during the week. There is gradually less daylight with each passing day. The true beginning and end of the seasons varies depending on snowfalls and general weather conditions.

The wildlife in Jotunheimen covers everything from hardy little birds to predators with eagle eyes and sharp noses. They are all high mountain specialists. Supple and strong, the wolverine roams around the mountain hunting and devouring carrion. He is a loner with a very large territory. The wolverine benefits from the numerous reindeer sharing the same territory.

Norway has an international responsibility for taking care of the wild reindeer. Approximately 90 % of the wild tundra reindeer in the world are found here. This high mountain species has adapted more than any other to low temperatures and barren pastures, and the herds are continually migrating between pastures and areas for calving throughout the year. The wild reindeer are found in Western Jotunheimen, while the herders in Vågå and Lom herd large flocks of tame reindeer in Eastern Jotunheimen.

Birds of the mountain –

Whilst up in the mountains, we can view and listen to the life in the air. The large birds of prey hunt small game, rodents and small birds. The second-largest bird of prey in Norway, the golden eagle, has a wingspan up to as much as 2,2 meters. The female is the largest, something common amongst birds of prey. The gyrfalcon also has a large wingspan. Measuring up to 1.6 meters this is our largest falcon. He is a swift hunter, normally catching his prey at high speed in the air. The menu preferably contains grouse, and he, therefore, nests in areas with large grouse stocks. Small birds are also the prey of the gyrfalcon. Birds are part of the soundscape of the mountain. The magical song of the plover follows many a mountain hiker, and if visitors hear a sound like two rocks hitting each other, it is the wheatear keeping an eye on them. The bluestocking, with its blue and reddish-brown chest, is exotic to look at, and can be found in birch forest and willow thickets in the high mountains.

Jotunheimen is broadly recognized in literature, especially travel books from the 18th Century. The Jotenheim lakes of Gjende and Bygdin are in the center of many of these descriptions.