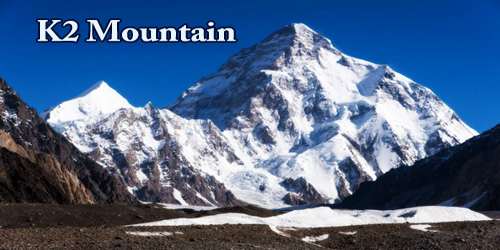 K2, Chinese Qogir Feng, also called Mount Godwin Austen, called locally Dapsang or Chogori, at 8,611 metres (28,251 ft) above sea level, is the second highest mountain in the world, after Mount Everest at 8,848 metres (29,029 ft). It is located on the China-Pakistan border between Baltistan in the Gilgit-Baltistan region of northern Pakistan, and the Taxkorgan Tajik Autonomous County of Xinjiang, China. K2 is the highest point of the Karakoram range and the highest point in both Pakistan and Xinjiang.

The name K2 was given in 1852 by British surveyor T.G. Montgomerie with “K” designating the Karakoram Range and “2” since it was the second peak listed. During his survey, Montgomerie, standing on Mt. Haramukh 125 miles to the south, noted two prominent peaks to the north, calling them K1 and K2. While he kept native names, he found that K2 did not have a known name.

K2 is also known as the Savage Mountain after George Bell, a climber on the 1953 American Expedition, told reporters “It’s a savage mountain that tries to kill you.” Of the five highest mountains in the world, K2 is the deadliest where approximately one person dies on the mountain for every four who reach the summit. Also occasionally known as Chhogori, or Mount Godwin-Austen, other nicknames for K2 are The King of Mountains and The Mountaineers’ Mountain, as well as The Mountain of Mountains after climber Reinhold Messner titled his book about K2 the same. K2 is the only eight-thousand metre peak that has never been climbed during winter or from its East Face. Ascents have almost always been made in July and August, the warmest times of year; K2’s more northern location makes it more susceptible to inclement and colder weather.

The glacier and snow-covered mountain rises from its base at about 15,000 feet (4,570 metres) on the Godwin Austen Glacier, a tributary of the Baltoro Glacier. The mountain was discovered in 1856 by Col. T.G. Montgomerie of the Survey of India, and it was given the symbol K2 because it was the second peak measured in the Karakoram Range. The name Mount Godwin Austen is for the peak’s first surveyor, Col. H.H. Godwin Austen, a 19th-century English geographer.

The fatality rate on K2 is 27 percent. If anyone attempt K2, they have a 1 in 4 chance of dying. Before the 2008 tragedy, of the 198 climbers who summitted the peak, 53 died on K2. That is three times the 9 percent fatality rate on Mount Everest. K2 is, next to Annapurna, the second most dangerous 8,000-meter peak.

Although the summit of Everest is at a higher altitude, K2 is a more difficult and dangerous climb, due in part to its more inclement weather and comparatively greater height from base to peak. As of June 2018, only 367 people have completed the ascent. 86 people have died attempting the climb according to the list maintained on the List of deaths on eight-thousanders. The summit was reached for the first time by the Italian climbers Lino Lacedelli and Achille Compagnoni, on the 1954 Italian Karakoram expedition led by Ardito Desio.

The first attempt to reach the summit was made by an Anglo-Swiss expedition in 1902 that ascended to 18,600 feet (5,670 metres) on the peak’s northeastern crest. Other unsuccessful attempts included an Italian expedition in 1909, led by Luigi Amedeo, duke d’Abruzzi, via the southeastern ridge (later called the Abruzzi Ridge) that reached approximately 20,000 feet (6,100 metres). In 1938 an American expedition led by Charles Houston via the Abruzzi Ridge reached about 26,000 feet (7,925 metres); in 1939 another American-led expedition following the same route reached about 27,500 feet (8,380 metres); and in 1953 another expedition led by Houston reached 25,900 feet (7,900 metres) on the Abruzzi Ridge.

Finally, in 1954, an Italian expedition consisting of five scientists (including the geologist Ardito Desio as leader), a doctor, a photographer, and 12 others, including a Pakistani, managed to conquer the Abruzzi Ridge despite the severe weather conditions. The summit was reached at 6 PM on July 31, 1954, by Achille Compagnoni and Lino Lacedelli. In the course of the ascent, Mario Puchoz, one of the guides, died of pneumonia.

With the mountain lacking a local name, the name Mount Godwin-Austen was suggested, in honor of Henry Godwin-Austen, an early explorer of the area. While the name was rejected by the Royal Geographical Society, it was used on several maps and continues to be used occasionally.

Because K2 is prone to frequent and severe storms that make the already treacherous climbing conditions on its slopes even more challenging and humans find functioning at such high elevations difficult it is one of the world’s most difficult mountains to climb. The number of people to have reached the top constitutes only a small fraction compared with how many have successfully climbed Mount Everest. In addition, although there have been fewer deaths on K2 compared with those on Mount Everest, the proportion of those killed to the number of people who have attempted climbing K2 is significantly higher.

On 9 August 1977, 23 years after the Italian expedition, Ichiro Yoshizawa led the second successful ascent, with Ashraf Aman as the first native Pakistani climber. The Japanese expedition took the Abruzzi Spur, and used more than 1,500 porters. The third ascent of K2 was in 1978, via a new route, the long and corniced Northeast Ridge. The top of the route traversed left across the East Face to avoid a vertical headwall and joined the uppermost part of the Abruzzi route. This ascent was made by an American team, led by James Whittaker; the summit party was Louis Reichardt, Jim Wickwire, John Roskelley, and Rick Ridgeway. Wickwire endured an overnight bivouac about 150 metres (490 ft) below the summit, one of the highest bivouacs in history. This ascent was emotional for the American team, as they saw themselves as completing a task that had been begun by the 1938 team forty years earlier.

On 1 August 2008, a group of climbers went missing after a large piece of ice fell during an avalanche, taking out the fixed ropes on part of the route; four climbers were rescued, but 11, including Ger McDonnell, the first Irish person to reach the summit, were confirmed dead.

As of 2014, 15 women had summitted K2, but four died on the descent. On August 23, 2011, Gerlinde Kaltenbrunner reached the summit of K2, becoming the first woman to climb all 14 of the 8,000-meter mountains without using supplemental oxygen. Kaltenbrunner also became the second woman to climb the 8,000ers. A team of Nepali women summited in 2014, including Pasang Lhamu Sherpa Akita, Maya Sherpa, and Dawa Yangzum Sherpa.

On 22 July 2018, Garrett Madison became the first American climber to reach the summit of K2 more than once when he led an international team of eight climbers, nine Nepali Sherpas, four Pakistani high altitude porters, and two other Madison Mountaineering guides to the summit.

On 22 July 2018, Polish mountaineer and mountain runner Andrzej Bargiel became the first person to ski down from summit to base camp.