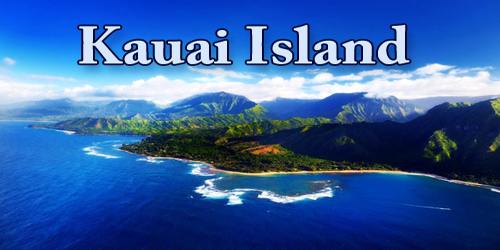 Kauaʻi, (Hawaiian: kɐwˈwɐʔi) anglicized as Kauai(a) (English: /kaʊˈaɪ(i)/ kow-EYE(-ee)), is Hawaii’s fourth-largest island and is sometimes called the “Garden Island”, which is an entirely accurate description. With an area of 562.3 square miles (1,456.4 km2), it is the fourth-largest of these islands and the 21st largest island in the United States. Kauaʻi lies 105 miles (169 km) across the Kauaʻi Channel, northwest of Oʻahu. This island is the site of Waimea Canyon State Park. Tourism is Kauaʻi’s largest industry.

The oldest and northernmost island in the Hawaiian chain is draped in emerald valleys, sharp mountain spires and jagged cliffs aged by time and the elements. Centuries of growth have formed tropical rainforests, forking rivers, and cascading waterfalls! Some parts of Kauai are only accessible by sea or air, revealing views beyond the visitor’s imagination. More than just dramatic beauty, the island is home to a variety of outdoor activities.

Kauaʻi is known as the “Garden Isle” for its abundance of tropical plants and flowers. It is also famous for white-sand beaches, towering peaks, waterfalls, and tropical rainforests, making it truly one of the world’s most beautiful islands. (Ecologically and agriculturally, Hawaiʻi is the endangered species capital of the world with a majority of species on Kauaʻi.) The island is a favorite for locals, tourists, honeymooners, and filmmakers. Jurassic Park, South Pacific, Raiders of the Lost Ark, King Kong, Six Days Seven Nights, Honeymoon in Vegas, Dragonfly, Avatar, Just Go with It, The Descendants and even Fantasy Island were all filmed on Kauaʻi.

Waterfalls tumble from lava cliffs, and the intoxicating fragrance of tropical blooms hangs heavy on the sultry air. But the island’s beauty lies not just in its luxuriant flora and abundant rain; its spectacular coastline will take visitor’s breath away. Lava sculpted this stunning island, thrusting up from the ocean floor to form velvety ridges and vertiginous cliffs rimmed by gorgeous beaches. Beneath its cobalt-blue seas, turtles and tropical fish swim along coral reefs, delighting divers and snorkelers from around the globe. 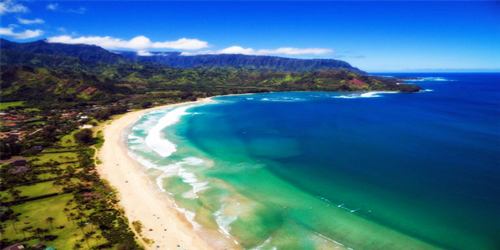 Some Facts and Statistics of  Kauaʻi Land:

Hawaiʻi was first settled by Polynesians sailing from other Pacific islands between 300 and 600 C.E. and was a native kingdom until the late 19th century. The expansion of the sugar industry meant increasing U.S. business and political involvement.

In 1778, Captain James Cook arrived at Waimea Bay, the first European known to have reached the Hawaiian Islands. He named the archipelago the “Sandwich Isles” after his patron, the 6th Earl of Sandwich, George Montagu. During the reign of King Kamehameha, the islands of Kauaʻi and Niʻihau were the last Hawaiian Islands to join his Kingdom of Hawaiʻi. Their ruler, Kaumualiʻi, resisted Kamehameha for years. King Kamehameha twice prepared a huge armada of ships and canoes to take the islands by force, and twice failed; once due to a storm, and once due to an epidemic. In the face of the threat of a further invasion, however, Kaumualiʻi decided to join the kingdom without bloodshed, and became Kamehameha’s vassal in 1810. He ceded the island to the Kingdom of Hawaiʻi upon his death in 1824.

In 1893, reigning Queen Liliʻuokalani was deposed, and a year later the Republic of Hawaiʻi was established with Sanford B. Dole as president. Following annexation (1898), Hawaiʻi became a U.S. territory in 1900. The Japanese attack on the naval base at Pearl Harbor on December 7, 1941, was directly responsible for U.S. entry into World War II. Hawaiʻi became a U.S. state on 21st August 1959.

Hawaiian narrative locates the name’s origin in the legend of Hawaiʻiloa, the Polynesian navigator credited with discovery of the Hawaiʻian Islands. The story relates how he named the island of Kauaʻi after a favorite son; a possible translation of Kauaʻi is “place around the neck”, describing how a father would carry a favorite child. Another possible translation is “food season”.

Kauaʻi was known for its distinct dialect of the Hawaiian language; this survives on Niʻihau. While the standard language today adopts the dialect of Hawaiʻi Island, which has the sound (k), the Kauaʻi dialect was known for pronouncing this as (t). In effect, Kauaʻi dialect retained the old pan-Polynesian /t/, while “standard” Hawaiʻi dialect has changed it to the (k). Therefore, the native name for Kauaʻi was said as Tauaʻi, and the major settlement of Kapaʻa would have been pronounced as Tapaʻa.

While Kauai is famous for its dramatic cliffs, canyons and rainforests, it’s also home to some of Hawaii’s most picturesque beaches. The island is surrounded by 50 miles of shimmering white-sand coast where visitors can enjoy jaw-droppingly beautiful unspoiled views. Find activities for both daring and more relaxed travelers, from surfing Hanalei Bay’s waves in the North Shore to spotting whales and sea turtles at Poipu Beach Park in the south.

Kauaʻi’s origins are volcanic, the island having been formed by the passage of the Pacific Plate over the Hawaii hotspot. At approximately five million years old, it is the oldest of the main islands. The highest peak on this mountainous island is Kawaikini at 5,243 feet (1,598 m).

The second highest peak is Mount Waiʻaleʻale near the center of the island, 5,148 ft (1,569 m) above sea level. One of the wettest spots on earth, with an annual average rainfall of 460 inches (38.3 ft; 11.7 m), is located on the east side of Mount Waiʻaleʻale. The high annual rainfall has eroded deep valleys in the central mountains, carving out canyons with many scenic waterfalls. On the west side of the island, Waimea town is located at the mouth of the Waimea River, whose flow formed Waimea Canyon, one of the world’s most scenic canyons, which is part of Waimea Canyon State Park. At three thousand feet (910 m) deep, Waimea Canyon is often referred to as “The Grand Canyon of the Pacific”. Kokeo Point lies on the south side of the island. The Na Pali Coast is a center for recreation in a wild setting, including kayaking past the beaches or hiking on the trail along the coastal cliffs. The headland, Kuahonu Point, is on the south-east of the island.

Hawaiʻian is one branch of the Polynesian language, others being Samoan, Tahitian, Marquesan, Tuamotuan, and Maori dialects. Every word must end in a vowel and every syllable must end in a vowel. No two consonants can be pronounced without at least one vowel between them. There is but one exception to this rule and it applies to a word introduced by the American missionaries – Kristo, from “Christ.”

Kauaʻi is home to the U.S. Navy’s “Barking Sands” Pacific Missile Range Facility, on the sunny and dry western shore. HF (“shortwave”) radio station WWVH, sister station to WWV and WWVB in Fort Collins, Colorado, is located on the west coast of Kauaʻi about 3 miles (5 km) south of Barking Sands. WWVH, WWV and WWVB are operated by the US National Institute of Standards and Technology, broadcasting standard time and frequency information to the public. Land in Kauaʻi is very fertile; farmers raise many varieties of fruit and other crops. Guava, coffee, sugarcane, mango, banana, papaya, avocado, star fruit, kava, noni and pineapple are all cultivated on the island.

Compared to its popular sister islands, Maui and Oahu, Kauaʻi exudes a low-key vibe and tends to move at a more relaxed pace. Don’t miss the breathtaking Nā Pali Coast, 10-mile-long Waimea Canyon, and the cloud-capped vistas from the cliffs above Hanalei Bay.