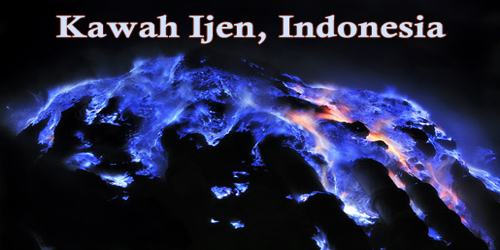 “Kawah Ijen” Volcano is a group of composite volcanoes located on the border between Banyuwangi Regency and Bondowoso Regency of East Java, Indonesia. It is inside a larger caldera Ijen, which is about 20 kilometers wide. The Gunung Merapi stratovolcano is the highest point of that complex. The name “Gunung Merapi” means “mountain of fire” in the Indonesian language (api being “fire”); Mount Merapi in central Java and Marapi in Sumatra have the same etymology.

Its milky turquoise waters may look inviting for a swim, but don’t jump in this caldera, formed in the crater of the Kawah Ijen volcano, is the world’s largest acidic lake. The electric blue flames that burst into the air are a source of fascination, though (of course) there is a scientific explanation: high levels of sulphuric acid, which give the water its striking hue, combust when they hit the air. 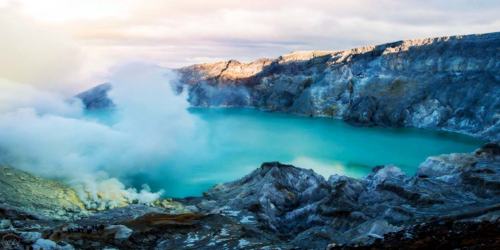 (The largest highly acidic Crater Lake in the world, Indonesia)

Mount Ijen began to be known to the world since the arrival of two tourists from France, Nicolas Hulot and his wife Katia Kraft in 1971. They wrote the story of the charm of the Ijen Crater and the hard life of the miners of sulfur chunks in Geo magazine, France. These two things are the main attractions for tourists and photographers around the world.

Kawah Ijen has two of the most unusual occurrences on Earth. The first is an active solfatara that emits hot, flammable sulfurous gases. These ignite as they enter Earth’s oxygen-rich atmosphere and burn with an electric blue flame. Some of the gas condenses in the atmosphere to produce flows of molten sulfur that also burn with an electric blue flame. The flames are difficult to see during the day but illuminate the landscape at night.

The second occurrence is a one-kilometer-wide caldera lake filled with turquoise-blue water. The color of the water is a result of its extreme acidity and a high concentration of dissolved metals. It is the world’s largest highly acidic lake with a measured pH as low as 0.5. The cause of its acidity is an inflow of hydrothermal waters charged with gases from a hot magma chamber below.

According to the local folklore, a long time ago, a high officer named, Patih Sidaphaksa had to carry out the orders of Raja Sindureja, looking for eternal flowers to the Ijen Crater. That said, this flower will make the king’s empire stay young. However, this flower also made Sidaphaksa part with his wife, Sri Tanjung and since that time it becomes the Banyuwangi legend.

Mount Ijen was mentioned when a prince from the kingdom of Wilis guerrilla against the VOC (Dutch East Indian Company) from behind the slopes of the Ijen mountains during the colonial period. Although finally defeated, this story proves Ijen as an ideal hiding place for the Blambangan warriors. The land is mountainous and filled with dense forests, really scary to outsiders. The haunted impression is so inherent in this no man’s land.

Since National Geographic mentioned the electric-blue flame of Ijen, tourist numbers increased. The phenomenon has occurred for a long time, but beforehand there was no midnight hiking. A two-hour hike is required to reach the rim of the crater, followed by a 45-minute hike down to the bank of the crater. The blue fire is ignited sulfuric gas, which emerges from cracks at temperatures up to 600 °C (1,112 °F).

The flames can be up to five meters (16 feet) high; some of the gas condenses to liquid and is still ignited. It is the largest blue flame area in the world and local people refer to it as ‘Blue Fire’.

A continuous stream of sulfur-laden gases blasts from fumaroles at the lake-side solfatara. These hot gases travel underground in the absence of oxygen. If they are hot enough when they emerge from a vent, the sulfur ignites upon contact with oxygen in the atmosphere. Often the temperature is low enough that the sulfur condenses, falls to the ground as a liquid, flows a short distance, and solidifies. This produces a renewable deposit of mineral sulfur that local people mine and carry to a local sugar refinery that buys it.

The sulfur, which is deep red in color when molten, pours slowly from the ends of these pipes and pools on the ground, turning bright yellow as it cools. The miners break the cooled material into large pieces and carry it away in baskets. Miners carry loads ranging from 75 to 90 kilograms (165 to 198 lb), up 300 meters (980 ft) to the crater rim, with a gradient of 45 to 60 degrees and then 3 kilometers (1.9 mi) down the mountain for weighing. Most miners make this journey twice a day.

A nearby sulfur refinery pays the miners by the weight of sulfur transported; as of September 2010, the typical daily earnings were equivalent to approximately $13 US. The miners often receive insufficient protection while working around the volcano and complain of numerous respiratory afflictions. There are 200 miners, who extract 14 tons per day about 20% of the continuous daily deposit. 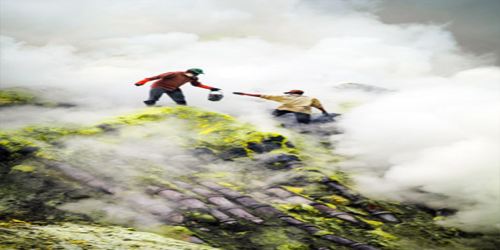 Sulfur mining at Kawah Ijen has its hazards. The steep paths are dangerous, the sulfur gases are poisonous, and occasional gas releases or phreatic eruptions have killed many miners.

Kawah Ijen Volcano is one of the few locations on Earth where sulfur is still produced by artisanal miners. Today, most of the world’s sulfur is produced as a byproduct of oil refining and natural gas processing. Nearly 70 thousand metric tons of sulfur are produced by these methods. A coincidence of low wages and a small local demand for native sulfur supports artisanal mining at Kawah Ijen.