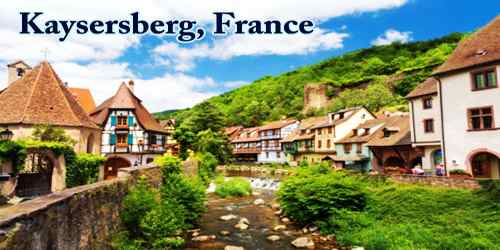 Kaysersberg (German: Kaisersberg) has been designated as one of the “most beautiful villages in France”. It is a former commune in the Haut-Rhin department in Alsace in northeastern France. On 1st January 2016, it was merged into the new commune Kaysersberg-Vignoble. The timeless charm of this small Alsatian village of cobbled streets, half-timbered buildings and remnants of a medieval castle perched on the hillside should not be missed when traveling the Route du Vin, the most famous wine route in France.

The inhabitants are called Kaysersbergeois. The name is German for Emperor’s Mountain. Dominated by the ruins of the castle, the town was built during the Middle Ages.

From this prosperous era, the little town has kept parts of its medieval walls and the round keep of its castle from which the view extends from the Vosges Mountains to the vineyards, the Plain of Alsace and the Black Forest Mountains in Germany.

The winding pedestrian streets of Kaysersberg are bordered by opulent half-timbered houses, many from the 15th and 16th centuries and decorated with magnificent geraniums. The fortified bridge that links the upper to the lower town is unique in Alsace. It leads to the church of the Holy Cross whose construction was spread out across 1230 and the 16th century. Inside is a remarkable wooden altarpiece from 1519.

Kaysersberg is located in the Alsace region of France, the extreme eastern part of the country that lies at the foot of the Vosges Mountains, bordering both Germany and Switzerland and is one of the loveliest and picturesque regions of France.

The high fortress that dominates the city serves as a reminder of both its strategic importance and its warlike past. Together with the rest of Alsace-Lorraine, Kaysersberg was annexed by Germany during a period of 48 years, between the Franco-Prussian War and the First World War.

Known for its Route du Vin, the most famous wine route in France, it is a marked series of roads that meander through picture-postcard little wine villages filled with colorful half-timbered buildings and castles perched on their hilltops. The route is just over 100 miles long, starting just west of Strasbourg, with the Rhine river that borders Germany to the east and the Vosges mountains to the west, then heads south towards Colmar and beyond to Mulhouse.

From many parts of the town, visitors can see the ruins of the Chateau de Kaysersberg poised on the hill above the town. An important route passes through the valley here (the Col du Bonhomme) that has been defended since Roman times, with the castle being built in the 13th century. In the following centuries, this was a prosperous town, apart from the years around the time of the Thirty Years War.

Many of the most imposing townhouses date from this period of prosperity with the 16th and 17th centuries particularly productive: for example, the Maison Herzer, the Maison Faller Brief and the Maison Bohn were all built during the 10 years from 1591 to 1601 and are three of the grandest houses in Kaysersburg.

Besides Kaysersberg, there are other must-see villages in the area that have also been designated as “most beautiful villages of France”…Eguisheim, Hunawihr, and Riquewihr. These fairytale villages and nearby Ribeauvillé, with its three castles and the town of Colmar with its “Petite Venise” old quarter should not be missed.