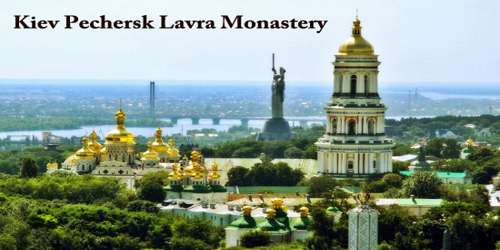 Kiev Pechersk Lavra, Kyiv Pechersk Lavra or Kyivo-Pechers’ka Lavra (Ukrainian: Києво-Печерська лавра: Kyievo-Pechers’ka lavra; Russian: Киeво-Печерская лавра: Kiyevo-Pecherska lavra), is the center of Orthodoxy, one of the most important monasteries of the Christian world. It is also known as the Kiev Monastery of the Caves, is a historic Orthodox Christian monastery which gave its name to one of the city districts where it is located in Kiev. The monastery was founded in 1051. 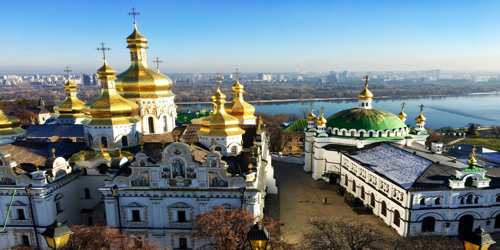 The Lavra is located in the center of Kiev, on the right, the high bank of the Dnieper, and occupies two hills separated by deep ravines, leading down to the Dnieper. The Lavra has been a preeminent center of Eastern Orthodox Christianity in Eastern Europe. Together with the Saint Sophia Cathedral, it is inscribed as a UNESCO World Heritage Site. The monastery complex is considered a separate national historic-cultural preserve (sanctuary), the national status to which was granted on 13th March 1996. The Lavra is not only located in another part of the city, but is part of a different national sanctuary than Saint Sophia Cathedral. While being a cultural attraction, the monastery is once again active, with over 100 monks in residence. It was named one of the Seven Wonders of Ukraine on 21st August 2007, based on voting by experts and the internet community.

This monastery complex was founded by two monks of the caves: St. Anthony and St. Theodosius. Constructed over a series of caves excavated by the monks, it is remarkable to think they date to the 11th century. The Baroque style of Ukraine is again at work in the series of additional buildings in the complex.

Currently, the jurisdiction over the site is divided between the state museum, National Kyiv-Pechersk Historic-Cultural Preserve, and the Ukrainian Orthodox Church as the site of the chief monastery of that Church and the residence of its leader, Onufrius, Metropolitan of Kiev and All Ukraine.

The word pechera means cave. The word lavra is used to describe high-ranking male monasteries for monks of the Eastern Orthodox Church. Therefore, the name of the monastery is also translated as Kiev Cave Monastery, Kiev Caves Monastery or the Kiev Monastery of the Caves (на печерах).

On the basis of historical facts Kiev Pechersk Lavra is one of the monasteries in Rus, which set up a monachism. St. Anthony and Foektist, the abbot of Esphigmenou Monastery, on distant Mount Athos created the monastery originally as a cave monastery. This contribution had not gone unnoticed. People started to come for blessings and spiritual advice. Prince Izyaslav, son of Yaroslav and his Kievan nobility had often visited the cave monastery. With help of their facilities there were built above ground and monastery cell, where the caves were close to the brethren, the amount of which rapidly increased. In 1062 St Anthony put the first abbot St. Barlaam and went into a remote cave, where he remained for 40 years.

After the transfer of St. Barlaam as a abbot to Holy Monastery, St Anthony blessed to igumen St. Theodosius as the most humble and benign of brotherhood. When the monastery had 100 monks, Theodosius sent one of them to Constantinople to the eunuchs Yerefema to rewrite Studiyskyy arose to bring it to Kyiv.

The monastery prospered above ground as well. The Dormition Cathedral was built from 1073 to 1089 as Kyiv’s second great Byzantine-inspired church, and the monastery became Kyivan Rus’ intellectual centre, producing chronicles and icons, and training builders and artists. Wrecked by the Tatars in 1240, the Lavra went through a series of revivals and disastrous fires before being mostly rebuilt, with its prevailing baroque influences, in the 18th century. It was made a museum in 1926 but was partly returned to the Ukrainian Orthodox Church (Moscow Patriarchate) in 1988.

History of Kiev Pechersk Lavra noticed that monastery had not passed its royal attention by any of the Russian Tsars: Peter the Great, Catherine II, Nicholas I and Nicholas II, Alexander I, Alexander II, Alexander III, Paul, Elizabeth. When visiting Laura kings, as well as the subjects took the blessing of the abbot. Romanov transferred to the monastery in person or through his messengers gold crosses and lamps, richly decorated with diamonds salaries prayer books, vestments of gold embroidery, brocade and cypress tombs for the dead saints. 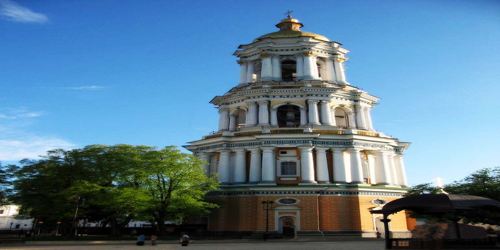 Things may change as a result of an ongoing inter-church crisis in Ukraine, but at the time of writing, the part of the complex known as upper lavra, where major sights are located, was run as a state-controlled museum. Further down, the lower lavra, which contains the cave complex, was controlled by Moscow patriarchate.