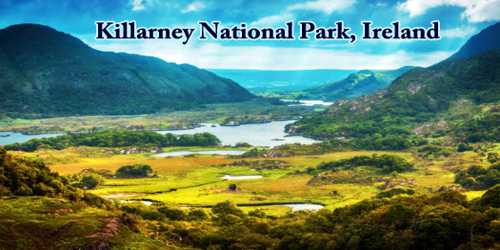 Killarney National Park (Irish: Páirc Náisiúnta Chill Airne), is located beside the town of Killarney, County Kerry, Ireland, and it was the first national park in Ireland, created when Muckross Estate was donated to the Irish Free State in 1932. The park has since been substantially expanded and encompasses over 102.89 km2 (25,425 acres) of diverse ecology, including the Lakes of Killarney, oak and yew woodlands of international importance, and mountain peaks. It has the only red deer herd on mainland Ireland and the most extensive covering of native forest remaining in Ireland.

Both the first national park in Ireland and a UNESCO Biosphere Reserve, there’s a lot of natural beauty. But Killarney National Park also has its fair share of history due to important heritage sites like Ross Castle and the mansion of Muckross House. The national park is focused around Lough Leane lake, and the smaller Muckross Lake to the south, although visitors will find mountains and forests as well.

The park is of high ecological value because of the quality, diversity, and extensiveness of many of its habitats and the wide variety of species that they accommodate, some of which are rare. The park was designated a UNESCO Biosphere Reserve in 1981. The park forms part of a Special Area of Conservation.

The National Parks and Wildlife Service is responsible for the management and administration of the park. Nature conservation is the main objective of the park, and ecosystems in their natural state are highly valued. The park is known for its scenery, and recreation and tourism amenities are provided for. 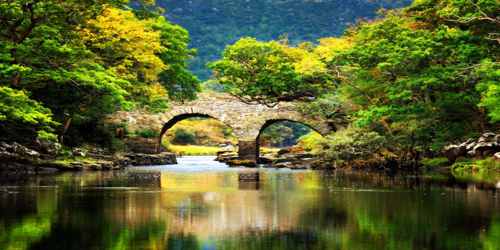 Killarney National Park, Ireland’s oldest National Park is located in Killarney, all the while adjacent to the town. This Park is one of the very few places in Ireland that has been continuously covered by woodland since the end of the most recent glacial period, approximately 10,000 years ago. Humans have lived in the area since at least the Bronze Age, approximately 4,000 years ago. Archaeologists have found evidence that copper mining took place in the Ross Island area during this period, which suggests that the area was of considerable importance to Bronze Age people. The park has many archaeological features, including a well preserved stone circle at Lissivigeen. The woods in the park have been disturbed and cleared at different periods since the Iron Age. This has caused a gradual decline in the diversity of tree species in the park.

Some of the most impressive archaeological remains in the park are from the early Christian period. The most important of these features is Inisfallen Abbey, the ruins of a monastic settlement on Inisfallen Island in Lough Leane. It was founded in the 7th century CE by St. Finian the Leper and was occupied until the 14th century. The Annals of Inisfallen, a record of the early history of Ireland as it was known by the monks, was written in the monastery from the 11th to 13th centuries. It is thought that the monastery gave rise to the name Lough Leane, which means “Lake of Learning”.

Killarney is also Ireland’s Oldest National Park, formed in 1932 when Senator Arthur Vincent and his family entrusted Muckross House & Estate into the care of the Irish State. Now the focal point for many visitors to Killarney, Muckross House & Gardens has been entertaining as a 19th-century mansion, containing all original pieces of furniture, artwork, trophies, and many other furnishings from that period. The Park is currently managed jointly by the National Parks & Wildlife Services and the Trustees of Muckross House, Killarney.

Killarney National Park contains many features of national and international importance such as the native oakwoods and yew woods together with an abundance of evergreen trees and shrubs and a profusion of bryophytes and lichens which thrive in the mild Killarney climate. The native red deer are unique in Ireland with a presence in the country since the last Ice Age.

The extent of the park’s range and rugged landscape is 26,000 acres, encompassing the infamous McGillycuddy Reeks Mountain Range which includes Ireland’s highest Mountain, Carrauntoohill standing at over 1,000 meters. Killarney National Park is in southwest Ireland close to the island’s most westerly point. The Lakes of Killarney and the Mangerton, Torc, Shehy, and Purple Mountains are in the park. Altitudes in the park range from 22 meters (72 ft) to 842 meters (2,762 ft). A major geological boundary between Devonian Old Red Sandstone and Carboniferous limestone lies in the park. The underlying geology of the majority of the park is sandstone, with the limestone pavements occurring on the low eastern shore of Lough Leane.

Lough Leane is the largest of the Killarney lakes and contains over 30 islands. Some visitors avail of boat trips to Innisfallen, one of the larger islands on Lough Leane.

These mountains have known millions of footsteps over the years; other famous mountains include Torc (Waterfall), Mangerton, Purple, and Tomies Woodland along with endless exploring of looped and park walks. Nestled within the woodlands and at the foot of these glorious mountains are the three world-famous Killarney Lakes; Upper, Muckross, and Lough Leane. The lakes, woodlands, waterfalls, and living history are the ingredients that make Killarney National Park so unique, particularly when coupled with the ever-changing light and skies that share in Killarney’s breathtaking scenery.

The geological boundary, the park’s wide range of altitudes, and the climatic influence of the Gulf Stream combine to give the park a varied ecology. These ecosystems include bogs, lakes, moorland, mountains, waterways, woodland, parks, and gardens. Outcropping rock, cliffs, and crags are features of the park. Above 200 meters (660 ft), the mountainous sandstone areas support large areas of blanket bog and heath.

The Park is widely used for recreational activates; crowned as Ireland’s adventure capital there are plenty of thrilling sporting options to satisfy visitors’ appetite; trail running across Ireland’s most scenic mountain trails, climbing Ireland’s highest Mountain Carrauntoohill, canyoning, etc. For the lesser octane souls, there are many enjoyable activities such as boat trips on the lakes and Innisfallen Island, beautiful leisurely walks, ideal family locations for picnics, cycling, discovering the nature trails, and a lot more exploring. 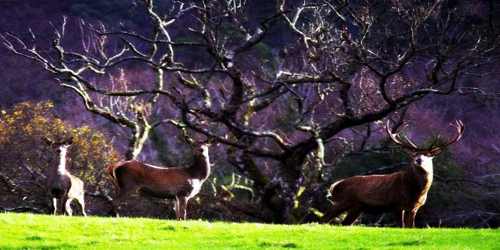 A large number of plant and animal species of interest occur within the site, including most of the native Irish mammal species, several important fish species including Arctic char, and a range of rare or scarce plant species. Several of the animal and plant species in the park have a hiberno-lusitanean distribution, meaning that they only occur in southwest Ireland, northern Spain, and Portugal. The main reason for this is the effect of the Gulf Stream on southwest Ireland’s climate. The park has been designated a biosphere reserve because of the presence of such rare species.

Among the mammals occurring within the National Park are otters (now rare in Europe), Stoats, Hedgehogs, Pygmy Shrews, Irish Hares, Rabbits, Rats, Wood Mice, House Mice, Badgers, Foxes, Red Squirrel and, since 1983, the American mink. In the past pine, martens were occasionally recorded here and in recent times their population has been augmented by the release of pine martens from the healthy breeding populations of Co. Clare. Seven species of bat have also been identified within the Park. The Bank Vole, first identified in northwest Kerry in 1964 has been present in Killarney since 1969. The uplands support the only remaining native herd of Red Deer in the country. A policy of total protection of these animals has been in operation in the National Park since 1964. The smaller Sika Deer from Japan were introduced into the area in 1865.

The varied habitats of mountain moorland, woodland, and lake, ensure that the Park supports a wide variety of bird species, Meadow Pipit, Stonechat and Raven occupy the uplands, with Peregrine Falcons, Merlins, and Red Grouse occasionally seen. Chaffinch and Robin frequent the woodlands, while Heron, Mallard, Little Grebe, and Water Rail breed about the lakes. The rivers and lakes are home to Kingfisher and Dipper. More recently, a former resident was re-introduced into the National Park-The White-Tailed Sea Eagle. Once plentiful around Killarney and the southwest, this magnificent bird of prey became extinct in the early part of the 20th century and now thanks to a joint venture between National Parks and the Golden Eagle Trust, it is being gradually re-introduced. The Lakes, which in their present form are the result of glacial excavation during the last Ice Age, contain fourteen species of fish, including natural stocks of Brown Trout and Salmon. Of special interest is the Charr, a species of fish that usually occupies Sub Arctic lakes. 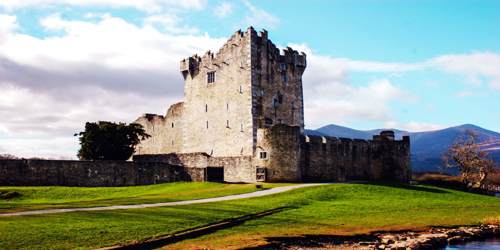 The park is open for tourism year-round. There is a visitor and education center at Muckross House. Visitor attractions in the park include Dinis Cottage, Knockreer Demesne, Inisfallen Island, Ladies View, the Meeting of the Waters and the Old Weir Bridge, Muckross Abbey, Muckross House, the Muckross Peninsula, the Old Kenmare Road, O’Sullivan’s Cascade, Ross Castle, and Ross Island, Tomies Oakwood, and Torc Waterfall. There is a network of surfaced paths in the Knockreer, Muckross, and Ross Island areas that can be used by cyclists and walkers. The Old Kenmare Road and the track around Tomies Oakwood have views over Lough Leane and Killarney. Boat trips on the lakes are available.

Killarney National Park was designated as a Biosphere Reserve in 1981 by the United Nations Educational, Scientific, and Cultural Organization (UNESCO), part of a world network of natural areas that have conservation, research, education, and training as major objectives.