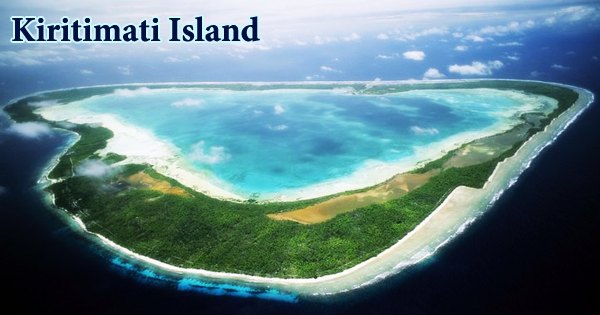 Kiritimati Island, often known as Christmas Island, is a coral atoll in the northern Line Islands in the Pacific Ocean. With a circumference of roughly 100 miles (160 km), it is the world’s largest completely coral formation island. Captain James Cook, an English navigator, discovered Kiritimati Atoll on Christmas Eve in 1777. It is a component of the Kiribati Republic. Its Gilbertese name is a phonological version of the English word “Christmas,” with the conjunction ti pronounced as s, and the name thus pronounced (kiˈrɪsmæs). Although most non-Kiribati people still pronounce the island’s name as Christmas or Christmas Island, the shift in spelling sometimes lead to non-Kiribati people mispronouncing it as the letter combination “Kiritimati” in English.

The island has the largest land area of any coral atoll in the world, covering around 388 square kilometers (150 square miles), with a lagoon that is roughly the same size. The atoll’s diameter is around 150 kilometers (93 miles), and the lagoon beach stretches for more than 48 kilometers (30 mi). Kiritimati makes up more than 70% of Kiribati’s total land area, which includes 33 Pacific atolls and islands. The island is mostly flat and low-lying, rarely rising above 3 or 4 meters above sea level.

Kiritimati Island is in the UTC+14 time zone, which is 20 hours ahead of Honolulu on the other side of the International Date Line and 2 hours ahead of Tarawa, the Gilbert Islands Group’s administrative hub. The Republic of Kiribati adjusted the International Date Line in 1995, placing Kiritimati to the west of the dateline, despite its location 2,460 km (1,530 mi) east of the 180th meridian. The United Kingdom conducted nuclear tests on and around Christmas Island in the late 1950s, and the United States did so in 1962. The island was not evacuated during these testing. As a result, the blasts exposed British, New Zealand, and Fijian personnel, as well as native islanders, to radiation.

Despite being claimed by the United States under the Guano Act of 1856, Great Britain annexed the atoll into the Gilbert and Ellice Islands Colony in 1919. The entire island is a Wildlife Sanctuary, with restricted access to five particularly sensitive regions. On and around the islands that make up the nation of Kiribati, there are several adventures to be enjoyed. Water is a significant feature in the life of the I-Kiribati, as well as all visitors, in a country with the world’s largest water-to-land ratio.

Polynesian traders and settlers lived on Christmas Island, which would have served as a good rest stop on long voyages from the Society Islands or the Marquesas Islands to Hawaii. Around AD 1000 people were reportedly using this trading route on a regular basis. When it was utilized for nuclear weapon tests during the Cold War, the military believed Kiritimati to be a “pristine” location. While military officers who chose South Pacific islands like Kiritimati sometimes described them as uninhabitable wilderness, this was rarely the case. At best, local residents were evicted from their homes; at worst, they were placed in an area where they could be exposed to ionizing radiation.

The fishing is world-class on Kiritimati (Christmas) Island, which is one of the few sites in the world where tourists and visitors can saltwater fly fish for the giant fighting bone fish. Deeper seas near Kiritimati and the Gilbert Islands are also excellent for achieving world records in game fishing. In 1882, a permanent colony was established, primarily by coconut plantation workers and fishermen. Levers Pacific Plantations was granted a 99-year lease on Christmas Island by the British government in 1902. On the island, the business planted 72,863 coconut palms and released silver-lipped pearl oysters into the lagoon.

For Operation Grapple, the British government tested nine thermonuclear weapons on Kiritimati between May 1957 and September 1958. The UK then collaborated with the US on Operation Dominic in 1962, carrying out another 31 detonations on Kiritimati. The yield was higher than planned during the British Grapple X test, and there was some blast damage in the towns. During nuclear weapons testing, most islanders were not evacuated, and data on the environmental and public health effects of these tests is still disputed.

Many of the British personnel who worked on the operation, as well as their families, were permanently affected by their time on the island. What they had witnessed, as well as the culture of secrecy that enveloped their employment, had scarred the men. After they went home, they were harmed by the government’s indifference. The population of the island has risen dramatically in recent years, from around 2,000 in 1989 to around 5,000 in the early 2000s. In the Maneaba ni Maungatabu, Kiritimati has three representatives.

Banana, Tabwakea, and London, which are located along the major road on the island’s northern point, and Poland, which is located across the main lagoon to the south, are the main communities of Kiritimati. The majority of the atoll’s food must be imported. In La Niña years, potable water might be scarce, especially around November. The Japanese built a huge and modern jetty in London that can handle some goods. Although overfishing has caused a severe drop in the populations of large, predatory fish over the last several years, marine fish provide a large percentage of the island’s sustenance.

The best way to explore a largely unspoilt culture in Kiribati is to take a domestic aircraft or ferry across to one of the outer islands and meet the always-friendly locals. If tourists/visitors come at the correct time of year, they may be able to see local festivals, such as religious holidays like Easter or Christmas, or national holidays like Kiribati Independence Day. There are excellent handicrafts for sale if tourists/visitors want to take a piece of the culture home with them. They are still made the traditional way.

Copra (dry coconut pulp) is the atoll’s principal export; the state-owned coconut plantation occupies roughly 51 square kilometers (20 sq mi). Fish from aquariums and seaweed are also shipped. Kiritimati Island is now a renowned tourist destination for world-class salt-water fly fishing. Travelers to the atoll can enjoy birdwatching, diving, surfing, and lagoon excursions, among other things. The island is home to the endemic “Christmas Island Warbler,” also known as the “Bokikokiko,” and is a sanctuary for 26 species of birds (tropical and land birds).

Kiritimati is also close to the Sea Launch satellite launch site, which is located at 0° N 154° W, roughly 370 kilometers (200 miles) east in international waters. Kiribati is also home to the Phoenix group of islands, which has the world’s largest maritime protected area, the Phoenix Islands Protected Area (PIPA). Kiritimati is an elevated atoll, and while it receives a lot of rain on occasion, due to the porous carbonate rock, thin soil, and lack of substantial vegetation cover on much of the island, little is retained, and evaporation is continual.

The ocean surrounding the island has been damaged by overfishing and pollution. Sharks made up 74 percent of the top predator biomass (329 g/m2) at Kingman Reef and 57 percent at Palmyra Atoll (97 g/m2) in the ocean around the Northern Line Islands’ uninhabited islands, whereas shark concentrations were low at Tabuaeran and Kiritimati. It is the location of the Millennium Monument, which recognizes Millennium Island (previously known as Caroline Island) and Kiribati as the first countries to witness the New Millennium in the year 2000. The geological evidence suggests that Kiritimati is relatively old, that it was never entirely submerged during the Holocene, and that it may have historically been home to a variety of unique wetland birds.