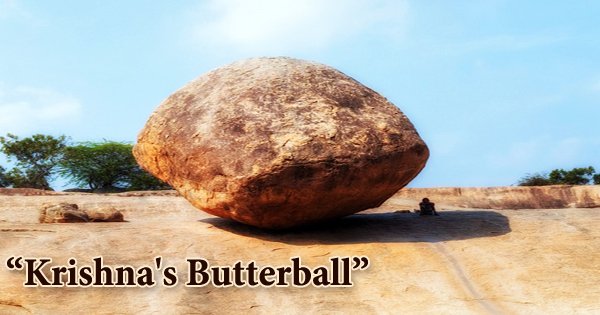 Krishna’s Butterball (also known as Vaan Irai Kal and Krishna’s Gigantic Butterball) is a 20-foot-high, 5-meter-wide rock that rests on a slick hillside with a 4-foot base. It is a massive granite boulder laying on a slight hill in Mamallapuram, a historical seaside resort town in Tamil Nadu, India. In India, the mystery rock, which hasn’t rolled in over 1300 years, dares to stand beneath his teetering 250-ton rock. The fact that the boulder perched precariously on a hill defies gravity hasn’t deterred adventurous visitors from taking photographs beneath it.

The rock’s posture is so unusual that it appears to be rolling down the slope. However, it remains stable, and travelers can even take shelter beneath it. Tsunamis, earthquakes, and cyclones haven’t moved it in over 1300 years. It is a major tourist destination since it is part of the Group of Monuments at Mamallapuram, a UNESCO World Heritage Site erected by the Pallava dynasty as Hindu holy monuments in the 7th and 8th centuries CE. The Archeological Survey of India has designated it as a protected national monument.

The 20-foot rock appears to resist gravity, as if it will roll at any minute, and all efforts have been in fruitless thus far. Various beliefs exist among the locals, who believe that this was arranged by Gods in order to demonstrate their strength. In fact, it resembles a half circle because a portion of the rock has been sheared off, and no one knows why. Researchers, on the other hand, feel it is nothing more than a natural structure. Furthermore, geologists believe that natural corrosion is to blame for the unusual shape.

The rock, according to many scientists, is simply a natural formation. It could be related to friction or the center of gravity, according to others. Because friction keeps the rock or ball from rolling down, we may stand on sloping ground, while the center of gravity permits it to balance on a limited contact area. As a result, numerous people attempt to move on rock from time to time, but no one is successful. The Governor of Madras, Arthur Lawley, attempted a similar effort in 1908, but their effort was unsuccessful.

Many people think it was erected in its current location by Gods thousands of years ago to demonstrate their power. One of the legends is that Pallava King Narasimhavarman (who governed South India from 630 to 668 A.D.) was the first to attempt to remove the rock since it was considered that sculptors should not touch the “heavenly rock.” It did not move from its original place. The boulder has become a popular tourist attraction in recent years, with people posing for photos beneath its base. Children and adults alike are excited to see this fascinating rock that defies all attempts to move it. An equal number of daredevils attempt to bring it down.

Furthermore, several travelers used the base as a sunshade. So far, moving the boulder has proven to be completely impossible. During their second “informal summit,” Indian Prime Minister Narendra Modi and Chinese President Xi Jinping held hands in front of Krishna’s Butterball on October 12th, 2019. The boulder is around 6 meters tall and 5 meters wide, with a weight of 250 tons. It appears to float and barely stands on a 1.2-meter (4-foot) high pedestal on top of a naturally eroded hill. It is a picnic site for locals as well. Some people attempt but fail to push or move the boulder down the hill; after that, they use it as sun protection.