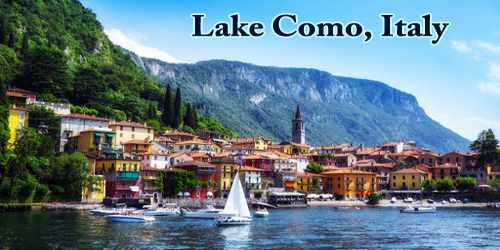 Lake Como (Italian: Lago di Como (ˈlaːɡo di ˈkɔːmo), locally (ˈkoːmo); Western Lombard: Lagh de Còmm (ˈlɑː‿dːe ˈkɔm), Cómm (ˈkom) or Cùmm (ˈkum)), is located in the north of Italy in the Lombardy region. It is only a 40-minute train ride from the capital of Lombardy, Milan. It approximates the Swiss border and is overlooked by the Swiss Alps. It is also known as Lario (Italian: ˈlaːrjo; after the Latin: Larius Lacus), is a lake of glacial origin in Lombardy, Italy. 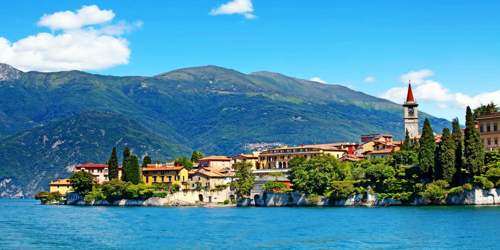 Lake Como is long (50km), slender, and extremely deep. The southern end forks into two long ‘legs’, with the picturesque town of Bellagio situated on the promontory between them. Like the other Italian Lakes, Lake Como has been popular as a resort since the days of the Roman Empire. Visitors ever since have admired the blue waters and relaxed in luxurious villas within the wooded lakeside slopes above. Today, most of the towns around the shores of Lake Como are popular tourists, walkers, cyclists, and swimmers.

Lake Como has an area of 146 square kilometers (56 sq mi), making it the third-largest lake in Italy, after Lake Garda and Lake Maggiore. At over 400 meters (1,300 ft) deep, it is the fifth deepest lake in Europe, and the deepest outside Norway; the bottom of the lake is more than 200 meters (660 ft) below sea level.

The views from every angle of Lake Como are nothing wanting spectacular. Many towns are established on the shores of the lake. The town of Como is the most well-known and also the biggest with 80,000 residents. Como is quintessentially Italian with a mixture of passionate people, flawless fashion, beautiful villas, and delicious food. Como feels quaint, features a sense of calm about it, and doesn’t feel touristy. It’s very unlike the frenetic almost scary energy of Rome or the touristy areas like Florence. Given its proximity to Milan, unsurprisingly, the shopping within the area is superb.

The lake’s name in Latin is Larius, Italianised as Lario, but this name is rarely used; it is usually called Lago di Como (literally “lake of Como”). In guidebooks, the lake may be variously referred to as Lake Como, Lake of Como, or Como Lake. Its name comes from the city of Como, known to the Romans as Comum.

Beaches in Lake Como are the perfect place to relax during the hot summer days, and in some cases, they also give visitors or travelers the opportunity to go sailing or windsurfing. Beaches can be found in every corner of Lake Como.

The lake is large, the third-largest in Italy. The depth of the lake can reach an impressive 420 meters plus. Given its beauty, a boat ride is essential. Como Township also has a funicular train to a vantage point that allows for breathtaking views of the nearby Swiss Alps. Como is on Italy’s main railway network, and trains run from Milan to Como frequently, taking around 40 minutes. Steamers, boats, and buses serve all the main towns on Lake Como. 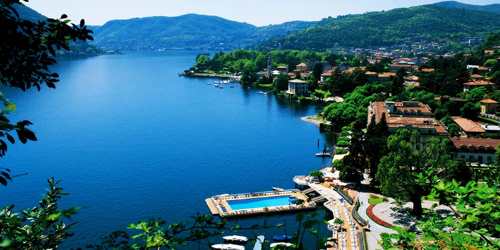 Its characteristic shape, reminiscent of an inverted Y, results from the melting of glaciers combined with the erosive action of the ancient Adda River. This led to the formation of the two southern branches, in the midst of which there is the world popular Bellagio. Located at the foot of the Alps, Lake Como provides one of the most picturesque sceneries in the world.

The mountainous pre-alpine territory between the two southern arms of the lake (between Como, Bellagio, and Lecco) is known as the Larian Triangle or Triangolo lariano. The source of the river Lambro is here. At the center of the triangle, the town of Canzo is the seat of the Comunità Montana del Triangolo lariano, an association of the 31 municipalities that represent the 71,000 inhabitants of the area. In the winter, the lake helps to maintain a higher temperature in the surrounding region. Average daily temperatures range from about 3.7 °C (39 °F). Water temperatures can reach an average of 24 °C (75 °F). Snowfall is erratic and primarily affects the higher elevations. Rainfall is heaviest in May and lowest during the winter months.

Luxuriant lakeshore vegetation includes vines and fig, pomegranate, olive, chestnut, and oleander trees. There is fishing for trout, eel, and agoni, a type of herring, but pollution has much reduced the fish population. The lake is famous for the natural beauty of its setting and for the handsome villas on its shores.

As a tourist destination, Lake Como is popular for its landscapes, wildlife, and spas. It is a venue for sailing, windsurfing, and kitesurfing. In the area surrounding Lake Como there are several farms that produce goods such as honey, olive oil, cheese, milk, eggs, and salamis. Visitors can find lists of these farms and typically visit the farm itself in person to make their purchases.

Among the many noted lakeside resorts are Como, Lecco, Bellagio, Tremezzo, Menaggio, and Varenna. Several towns are connected by steamer services. Many famous people have or have had homes on the shores of Lake Como, such as Matthew Bellamy, John Kerry, Madonna, George Clooney, Gianni Versace, Ronaldinho, Sylvester Stallone, Julian Lennon, Richard Branson, Ben Spies, Pierina Legnani, Lionel Messi and José Mourinho. The Lake Como ferry service is a highly developed public transport system linking the many small towns around the Lake. Lake Como is the setting of the annual Classic cycling race, the Giro di Lombardia (Tour of Lombardy).