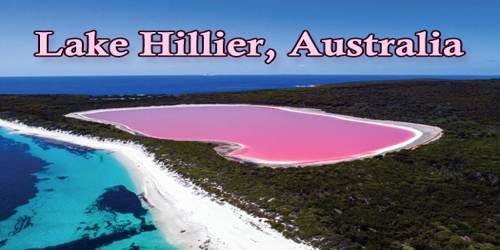 “Lake Hillier” is a saline lake on the edge of Middle Island, the largest of the islands and islets that make up the Recherche Archipelago in the Goldfields-Esperance region, off the south coast of Western Australia. It is particularly notable for its pink color. A long and thin shore divides the Southern Ocean from the lake. Its color is still something of a mystery, though the most commonly accepted theories relate to the lake’s high salinity.

The Hillier Lake was first discovered in 1802 by navigator and cartographer Matthew Flinders who took samples from the lake and mentioned its existence in his journal. The reason of its unique color is still a topic that is not fully understood by scientists, although most suspect it has to do with the presence of the Dunaliella salina microalgae. The Dunaliella produces carotenoids, a pigment found in carrots as well. But the presence of halophilic bacteria in the salt crusts could be another explanation. A reaction between the salt and the sodium bicarbonate that is found in the water may cause it as well. 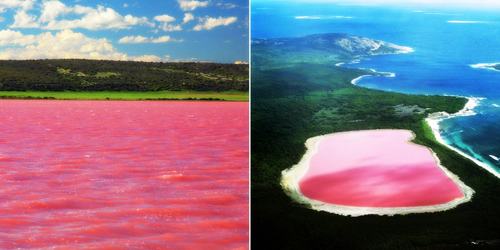 Lake Hillier is about 600 meters (2,000 ft) in length by about 250 m (820 ft) in width. The lake is surrounded by a rim of sand and a dense woodland of paperbark and eucalyptus trees with a narrow strip of sand dunes covered by vegetation separating its northern edge from the northern coast of the Middle Island. The most notable feature of the lake is its pink, vibrant color. The vibrant color is permanent and does not alter when the water is taken in a container. The pink color is considered to be due to the presence of the organism Dunaliella salina.

The Extreme Microbiome Project, part of the Association of Biomolecular Resource Facilities (ABRF), Metagenomics Research Group (MGRG), has performed a metagenomic analysis on the lake to find Dunaliella as well as Salinibacter ruber, Dechloromonas aromatica, and a few species of the Archaea. Air is the best mode of transportation for viewing the lake. At one point in its history, the lake was used to collect salt.

The only living organisms in Lake Hillier are microorganisms including Dunaliella salina, which causes the salt content in the lake to create a red dye which helps produce the color, as well as red halophilic bacteria present in the salt crusts. Despite the unusual hue, the lake exhibits no known adverse effects upon humans. From above, the lake appears a solid bubble gum pink, but from the shoreline, it appears more of a clear pink hue. The shoreline is also covered in salt crust deposits.

The water of the lake is otherwise clear and it causes no harm to the human skin and the Dunaliella salina alga is completely harmless as well. In fact, swimming in the lake’s water is safe and fun but impossible to do for normal tourists as the lake can’t be visited.

As recently as 2012, Lake Hillier has been located within the boundaries of the Recherche Archipelago Nature Reserve. Since 2002, the lake itself has been considered to be a wetland of “subregional significance”.