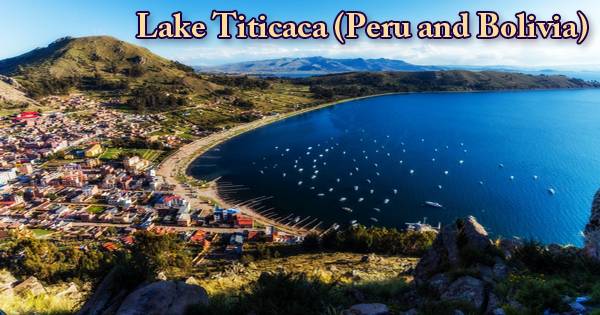 Lake Titicaca (/tɪtɪˈkɑːkə/; Spanish: Lago Titicaca (ˈlaɣo titiˈkaka); Quechua: Titiqaqa Qucha) is the highest navigable lake in the world and one of the spectacular natural wonders of South America. It is a huge, deep, freshwater lake, also called the “highest navigable lake” in the world, in the Andes on the border of Bolivia and Peru. It is most easily accessible via Copacabana in Bolivia from La Paz and via Puno in Peru from Cusco. In the Andes Mountains, the lake is situated at the northern end of the Altiplano Highlands, covering regions in southeastern Peru and northwestern Bolivia. The deep blue of the water appears to meld with the sky, and the incredible feeling of floating atop the highest elevations of the world is produced by a ring of snow-tipped peaks.

Titicaca is South America’s second-largest lake (after Maracaibo); it occupies some 3,200 square miles (8,300 square km) and stretches for 120 miles in a northwest-to-southeast direction (190 km). At its widest point, it is 50 miles (80 km) wide. The lake is divided by a narrow strait, Tiquina, into two bodies of water. For several years, the 2,200-ton (2,425 U.S. tons), 79-metre (259 ft) SS Ollanta was the largest vessel afloat on the lake. The similarly-sized train barge/float Manco Capac, run by PeruRail, is most likely the largest vessel today. From its shores in Peru and Bolivia, you can visit the lake, but many travelers launch their exploration from Puno on the Peruvian side of Lake Titicaca. 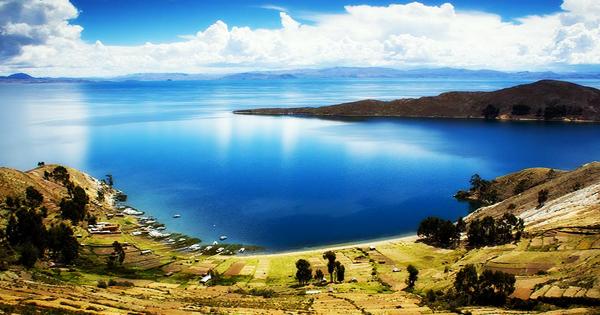 The lake consists of two nearly separate sub-basins linked to the Strait of Tiquina, which at the narrowest point is 800 m (2,620 ft) long. The western part of the lake is in Peru’s Puno region (approx. 56 percent of the lake), while the eastern part is in Bolivia’s La Paz department (approx. 44 percent of the lake). At its deepest point, in the northeastern part of the lake, the lake is 284 m long. Wiñaymarka (also called Lago Pequeño, ‘little lake’), a smaller sub-basin, has an average depth of 9 m (30 ft) and a maximum depth of 40 m (131 ft). The total average lake depth is 107 m (351 ft).

The smaller is named Lake Huiñaymarca in Bolivia and Lake Pequeño in Peru, in the southeast; the larger is called Lake Chucuito in Bolivia and Lake Grande in Peru, in the northwest. Lake Titicaca feeds into five main river systems. In order of their relative flow volumes, these are Ramis, Coata, Ilave, Huancané, and Suchez. In Titicaca, more than 20 other smaller streams are empty. There are 41 islands in the lake, of which several are heavily populated. The lake is fed by 27 tributaries and by precipitation. The only river which flows from the lake is the Desaguadero River. It streams from Lake Titicaca’s south and empties into Lake Poopó.

In the high plain Altiplano region with a semi-arid climate, Lake Titicaca exists. Throughout the year, daytime temperatures range from about 60oF to 65oF (15oC to 18oC). Night temperatures drop in the area at such a high elevation, so pack a jacket to stay warm. It is very unlikely to snow. The word Titicaca’s meaning is unclear, but it has been translated as Rock of the Puma or Crag of Lead in different ways. Titicaca lies in a vast basin between the Andean ranges (about 22,400 square miles (58,000 square km) in the area) that comprises much of the central Andes’ Altiplano (High Plateau). Some of the highest peaks in the Andes rise to heights of more than 21,000 feet on the northeastern (Bolivian) shore of the lake in the snow-covered Cordillera Real (6,400 meters). 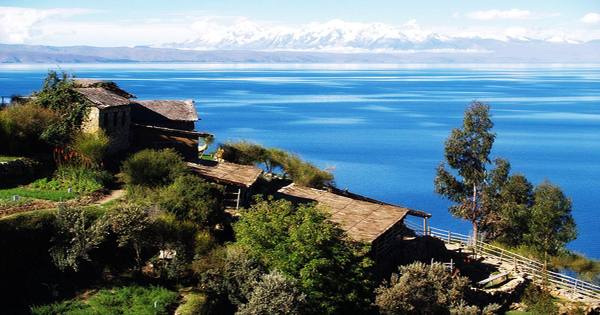 Lake Titicaca on the Andes from Bolivia

Lake Titicaca acts as a source of drinking water and food for the surrounding population in the desolate Andes plateau and, as such, is important for their survival. The water body produces a favorable microclimate that makes it possible at that altitude to grow potatoes and grains (barley, corn, and quinoa). In addition to farming, animal husbandry is also of great significance for alpacas, llamas, sheep, and cows. The lake is monomictic, with just one season of free circulation, and water passes through Lago Huiñaimarca and flows out of the single outlet at Río Desaguadero, which then flows south to Lake Poopó through Bolivia. This only accounts for about 10% of the water balance of the lake. Evapotranspiration, caused at high altitudes by strong winds and extreme sunlight, balances the remaining 90 percent of the loss of water.

The first colonies around Lake Titicaca date back to about 1,500 B.C. The Aymara had their center here for faith and administration. There is no known protohistorical or prehistoric name for Lake Titicaca. It probably lacked a single, widely recognized name in prehistoric times and at the time the Spaniards arrived, given the different Native American groups that inhabited the Lake Titicaca region. Around 2 million people live in the immediate vicinity of Titicaca Lake today. This has put high demands on all the lake’s capital, the shore areas, and the adjacent land. The waters of Titicaca are limpid and just slightly brackish, varying in salinity from 5.2 to 5.5 parts per 1,000. Normal surface temperatures are 56 °F (14 °C); temperatures drop to 52 °F (11 °C) at the bottom of the thermocline at 66 feet (20 m). Measurable concentrations of sodium chloride, sodium sulfate, calcium sulfate, and magnesium sulfate in the water are seen in the study.

More than 530 aquatic species are native to Lake Titicaca. The aquatic life of Lake Titicaca consists mainly of two species of killifish (Orestias), a small fish, typically black striped or barred, and a catfish (Trichomycterus). In 1939, and subsequently, the Titicaca trout was introduced. The shallower regions of the lake are populated by a large frog (Telmatobius), which can reach a length of almost afoot. Also in danger is the ecology of the genus Andes Carp (Orestias). Their numbers are threatened by water contamination as well as the introduction by humans of foreign fish species. This genus contains the possibly extinct Amanto (Orestias cuvieri). 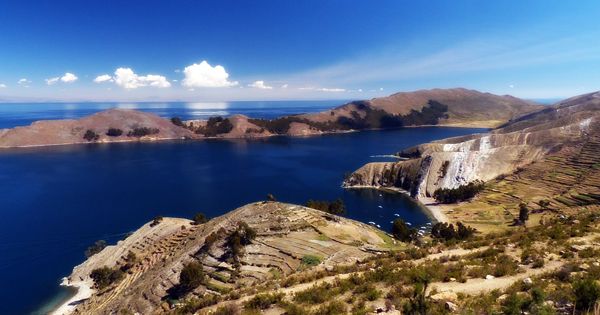 View of Lake Titicaca from Peru

Titicaca is home to 24 species of freshwater snails described (15 endemics, including some small Heleobia spp.) and less than half a dozen bivalves (all in the Sphaeriidae family), but these are generally very poorly defined and need to be reviewed in terms of their taxonomy. There is also an endangered flock of amphipods containing 11 Hyalella species in the lake (an additional Titicaca Hyalella species is nonendemic). Forty-one islands emerge from the seas of Titicaca, some of them heavily populated. Just off the tip of the Copacabana Peninsula in Bolivia lies the highest, Titicaca Island (Spanish: Isla de Titicaca also called Isla del Sol).

A barley field growing at a height of 15,420 feet (4,700 meters) above sea level was found to be the highest cultivated plot in the world near Titicaca. The grain never ripens at this height, but the stalks provide forage for llamas and alpacas, the camel’s American relatives that serve the Indians as beasts of burden and provide meat and fur. At Lake Titicaca, reeds and other aquatic plants are prevalent. Azolla, Elodea, Lemna, and Myriophyllum are abundant in sheltered shallow waters, such as Puno’s harbor. The lake plain is covered with large numbers of now abandoned pre-Columbian raised platform fields and ditches designed to improve drainage and enhance the agricultural potential of the area. In some places in both Peru and Bolivia, this ancient method of reclamation has been revived.